Opinion: EU Doing Little, But All It Can on Georgia | Europe| News and current affairs from around the continent | DW | 16.09.2008

The European Union's response to the Caucusus crisis hasn't been exactly forceful. But DW's Christoph Hasselbach says it's all that anyone can expect given Russia's global strategic importance.

The EU foreign ministers conference in Brussels was an object lesson in vague, diplomatic dithering. The news out of that meeting is that the bloc will send 200 observers to Georgia, but how many of them, people would like to know, will be in South Ossetia and Abkhazia?

The EU isn't answering that question -- for good reason. Russia is never going to allow the observers into the two breakaway Georgian provinces. 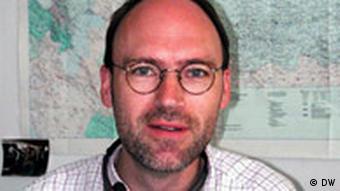 Russia has recognized both regions as independent states, while the majority of the international community still considers them part of Georgia. In de facto sense, though, Georgia has lost them since Russia is highly unlikely to withdraw its troops stationed there.

When EU foreign ministers talk about Georgia, they purposefully evade the issue of that country's precise borders. They may officially insist on Georgia's territorial integrity, but they know that that integrity has been permanently violated.

NATO Secretary General Jaap de Hoop Scheffer uses an entirely different language. He's not prepared to accept the presence of Russian troops on Georgian soil and has criticized the EU for tolerating the situation.

Together with NATO's ambassadors in Tbilisi, he's held out the prospect that Georgia may some day be invited to join the military alliance. The Russian leadership in Moscow sees this as the latest in a series of provocations.

Privately, the governments of most NATO member states are happy that they have no obligation, at present, to come to Georgia's defense. A military confrontation with Russia over Georgia, if it were to become a NATO member, would be a nightmare.

Moreover, Georgian President Mikheil Saakashvili is seen as a political hothead. In abstract terms, Saakashvili had the right to use military force against separatists in the two regions to preserve Georgia's territorial integrity. But the military intervention was a colossal blunder. Right is one thing -- the power to enforce it is another.

So which is the better strategy -- the confrontational approach pursued by NATO or the diplomatic and humanitarian course charted by the EU?

It's legitimate to criticize the EU's vagueness and welcome de Hoop Scheffer's candor. Nonetheless, the EU is likely to achieve more than NATO.

Unfortunately, it's improbable that very much at all will happen. There'll be a bit of reconstruction and some aid for refugees, but there will be no return to the status quo ante. Western alliances will have to accept that their influence in the Caucasus is limited and that they will inevitably have to yield to Russia in the region.

Amidst the Georgia conflict, no one should lose sight of the fact that the world needs Russia as a partner -- whether in relation to Afghanistan or the Middle East, on energy policies or nuclear weapons proliferation.

The EU is doing its best within such constraints. Its strategy is open to criticism but has a better chance of achieving some results.

NATO chief Jaap de Hoop Scheffer on Monday said Russia's plan to keep troops in Georgia's breakaway regions was "unacceptable" and "hard to swallow." The EU-brokered cease-fire left Moscow with too much leeway, he said. (15.09.2008)

Ever since Russia and Georgia launched an information war in the world's media, the Baltic nations have been exposed to two often-conflicting viewpoints about the war and its consequences. (14.09.2008)