Opinion: Erling Haaland has no choice but to look elsewhere

Erling Haaland's agent Mino Raiola has reportedly been sounding out Manchester United, Manchester City, Real Madrid and Barcelona. After Borussia Dortmund failed again, it's difficult to argue that it's the wrong call. 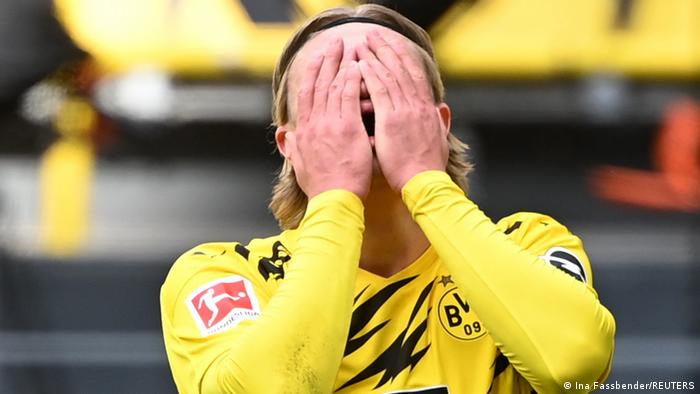 Erling Haaland had something of an off-day in Borussia Dortmund's 2-1 home defeat to an impressive Eintracht Frankfurt on Saturday.

The Norwegian striker dragged two presentable chances wide and took a heavy first touch in a one-on-one in an open first half. But as the game slipped away, he started to shrug his shoulders and throw his arms in frustration when Dortmund attacks broke down after misplaced passes, miscommunications and poor decisions. Just as he had in a draw with Cologne before the international break.

Dortmund, and anyone who watches them, have become so used to Haaland saving them, that it feels like they're just waiting for him to do it. The 20-year-old has carried BVB on his back this season and with Jadon Sancho out injured, center back Mats Hummels, who scored Dortmund's goal, was the second most prolific player on the pitch for the hosts, with four goals this term.

As astoundingly good as he is, Haaland can't do it every week and Andre Silva's late header from a Filip Kostic cross sealed a 10th league loss of the season after Hummels had equalized following a Nico Schulz own goal.

After just over a year, Haaland has outgrown Borussia Dortmund.

Though the eyes of Germany were largely focused on the late title clash between Bayern Munich and RB Leipzig, this was a huge chance for Dortmund to make ground on their opponents in the race for the Champions League. As it is, they are seven points off with seven games remaining. The Europa League beckons.

It's clear that Haaland is already one of the best players in the world and it seems almost certain he'll get even better. But football moves fast and he can't afford to wait around for Dortmund to become a club of similar stature. If they even have aspirations to be.

Mino Raiola believes his client's future lies elsewhere. The "super-agent" has reportedly been touting Haaland's services to the biggest clubs in England and Spain over the international break. Such moves leave a sour taste in the mouth of some fans, and understandably so. But, just as when he moved from RB Salzburg to Dortmund last year, Haaland, and by extension Raiola, have to look after themselves. A player of his talent has to play on the biggest stage.

Even if Dortmund somehow salvage Champions League football from a thoroughly dispiriting season, will new coach Marco Rose really believe he can challenge Bayern Munich? Or is it simply time for another rearrangement of European football's shop window?

With a below-market-value release clause set to kick in next year, it has long looked likely that Haaland would be off this summer. But any sort of sign of life from the Bundesliga side may just have made him think twice.

Right now, they can't even offer him that glimmer of hope. Looking elsewhere is his only valid career choice.

It was billed as the battle of the strikers and Robert Lewandowski and Erling Haaland ensured it lived up to that. Haaland scored twice for Dortmund but Lewandowski and Bayern had the last word, winning 4-2 to go top.

Borussia Dortmund might not have been at their best in their second leg, but they were up for the fight against Sevilla and that was enough to secure a spot in the quarterfinals.