Opinion: Emmanuel Macron′s purges in Paris | Europe | News and current affairs from around the continent | DW | 21.06.2017

The new French president has lost his liberal coalition partner under Francois Bayrou. All for the better: Only now can Emmanuel Macron maintain his credibility, argues DW's Max Hofmann. 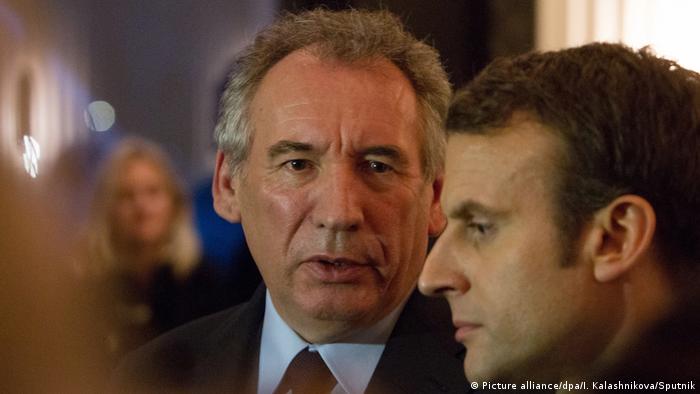 "Démission de courtoisie" - the collective resignation of a government that customarily happens after a French parliamentary election - can be loosely translated as a "resignation out of courtesy." The prime minister withdraws his government and sends them, sometimes with slight changes, back into the race - a formality to take into account new insights gleaned from the election. And so it goes this time as well. But what's happening in France has nothing to do with courtesy. It's about credibility.

Four ministers have left (or more precisely: been forced to leave) the cabinet, including all three from the "Mouvement Democrate" (MoDem) under the leadership of centrist Francois Bayrou, himself a political institution in France. Bayrou was hoping to stay on as justice minister and had already announced a new law for the "moral improvement of political life," or, less pompously, an anti-corruption law. With his proposal he was toeing the line of the young president, who has promised to clean up wasteful spending of taxpayers' money and the use of high-powered positions in government for self-enrichment and nepotism.

Too bad that Bayrou's entire party has now been targeted by investigations: It's suspected of misappropriating EU funds to finance some of its official activities, possibly violating a rule stating that the two things must be kept separate. In previous governments such an accusation would have been dismissed as trivial. And compared to what the conservative presidential candidate Francois Fillon has been accused of doing - giving his wife up to a million dollars for heretofore unknown reasons - it probably is. But Emmanuel Macron assumed office promising to clean up politics, and now he must follow words with deeds.

It's only logical, then, that the young president - who is keeping his cabinet on a very short leash - is starting to clamp down. In fact, there's no other option for him. The extremely low turnout in the parliamentary elections shows that the political turmoil in France hasn't dissipated overnight.

Quite the contrary: on the far left and the far right, La France Insoumise and the National Front are waiting eagerly for the government's first missteps so that they can reap the radical potential of the French electorate. Because he didn't want to descend into the same elitist corruption of his predecessors, Macron had to take action.

The situation isn't pretty for the president. First, it never looks good to mistreat a minister who's already in office. One wonders if it's really so difficult to do a more thorough job of reviewing potential problems before appointing someone to a position in the government. Second, Macron has been hard-pressed for experienced and "clean" ministers. Members of MoDem are probably out of the running, since even their boss had to go. The president has thus lost his de facto coalition partner. He must now close the gaps from within his own ranks. That won't be easy, since over half of his party's members are political newcomers. While Macron is following through on his promise to innovate, at the same time the bar for competence is being set quite low.

The president himself may have been irritated over the past few days by having to enter into a coalition with MoDem. After all, he won the majority in parliament without Bayrou and Co. It would have been better if his party, "La République En Marche," had not relinquished seats to some of his partners, but a few weeks ago Macron probably thought his young party was dependent on an alliance with MoDem. On the other hand, it's better to make a painful break than to draw out the agony. The cooperation wouldn't have been easy anyway. Now Macron has even more freedom, even if his majority has shrunk due to the absence of his partner. But for the president, a small majority is still better than no credibility.

Have an opinion to share? You can leave a comment below. We look forward to your comments!

Macron marches to the future