A second US court ruling on weed killer glyphosate's potential to cause cancer has dealt a severe blow to German chemicals company Bayer. DW's Henrik Böhme says it's obvious that the takeover of Monsanto was a mistake. 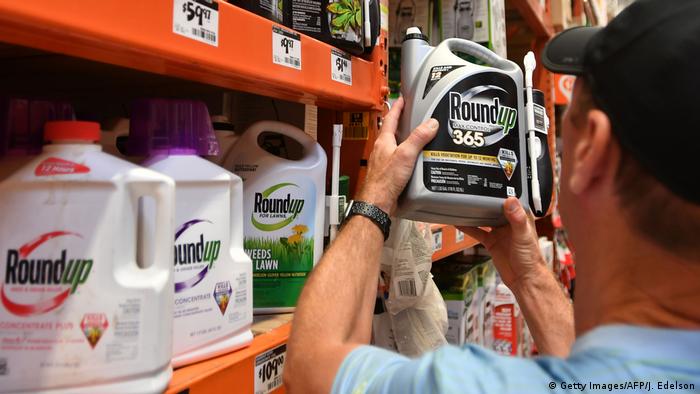 Shareholders and analysts are united in their conviction that investors are better off without Bayer shares in their portfolios. The Leverkusen-based chemical giant's shares plunged by over 12 percent Wednesday, thus shedding some €8 billion ($9.1 billion) in stock market value.

Owners of Bayer shares are used to trouble, though. Ever since Bayer's spectacular takeover of US company Monsanto, which had also meant inheriting weed killer glyphosate's poor image, investors have had no reason to rejoice. The share price has dropped to €60 euros, down from over €100 last summer.

It seems that more and more people can't figure out what benefits the Monsanto takeover was meant to offer. Last year, Bayer acquired the pariah of the chemicals industry for a whopping $63 billion.

Bayer CEO Werner Baumann believed it was a sensational feat to crown his career, but now damage control is the order of the day. He's already announced that several thousand employees will have to be laid off. The Leverkusen executives greatly underestimated the legal risks involved in the many lawsuits over glyphosate's potential health hazards.

Monsanto lost a first such case last August, even though the court lowered the initial fine. Now that Bayer has completely integrated Monsanto and has full access to the latter's accounting books, Tuesday's US court ruling stating that glyphosate contributed to a man's cancer is a severe blow.

Bayer has already made provisions to the tune of €660 million for litigation, but it's questionable whether that sum will suffice, given the wave of lawsuits against the firm. The most recent verdict is indicatory for another 760 cases pending. All in all, Bayer is confronted with some 11,000 complainants.

Billions down the drain

Not long ago, the Leverkusen folks were optimistic that they could get on top of the issue. They had hoped that the US court would eventually come to the conclusion that Roundup (Monsanto's glyphosate-based product) was not responsible for causing cancer in complainant Edwin Hardeman.

But things took a different course, and now Bayer says it's "disappointed." Dismissing such a turn of events may be seen as naive. Should, in the second phase of court proceedings, the jury find that Monsanto had kept under wraps the potential health hazards of glyphosate, it should be a red flag for Bayer.

It hasn't come to that yet, and the German firm will be fighting tooth and nail to prove the opposite. But the air is no doubt getting thinner, with Bayer probably wanting to agree to billions upon billions of dollars in compensation payments to end court trials quickly.

Right now, the takeover of Monsanto is a prime example of how the megalomania of an executive can backfire. Baumann wanted to prove that — unlike his predecessors — he had the guts to swallow an unbeloved US rival. But now Monsanto is sitting heavily on his stomach, leaving Baumann as the largest destroyer of stock market value in the history of Germany's blue-chip DAX index.