Opinion: Bush and the Damage Done 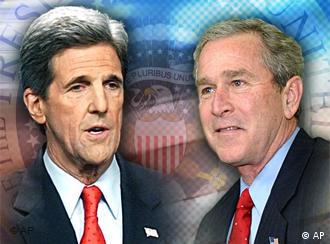 Four years ago, the United States was in the midst of a fiercely contested bitter presidential campaign. This year's election is turning out to be just as close and American voters remain as polarized as they were in 2000. However, the issues dividing the electorate have completely changed.

Back in 2000, most Americans were preoccupied with domestic concerns. Many voters had no problem supporting the candidacy of George Bush, even though he himself admitted he had very limited foreign policy experience.

Of course, that isn't the case in 2004. This year the campaign is dominated by international issues such as the war in Iraq and the fight against global terrorism. Now calling himself a "war president," Bush has pinned his election hopes almost entirely on his administration's foreign policy.

When expatriate Americans cast their ballots for president on November 2, they will be better prepared than most of their countrymen back home to assess whether that foreign policy has been marked by taking calculated risks in troubled times or if it's an unmitigated disaster harming the nation's interests more than advancing them.

The September 11, 2001, attacks in New York and Washington -- the worst on American soil since the Japanese bombed Pearl Harbor -- were bound to have a major impact on the United States' role in the world. Bush started two wars in response to al Qaeda's aggression. But whereas there was little opposition around the world to toppling the Taliban in Afghanistan, the US-led invasion of Iraq has caused irreparable damage to America's image internationally.

That is partly because the conflict in Iraq has marked such a radical departure for US foreign policy. The Bush administration broke with the pragmatic realpolitik traditionally favored by American conservatives for a strategy of pre-emptive war. Arguing that the United States was threatened by Iraqi dictator Saddam Hussein, US neo-conservatives urged Bush to abandon the restrictions of multilateralism and his efforts at engaging the United Nations.

But long before the Iraq war, Bush's government had decided to take a unilateralist tack on a host of other issues, including the environment, arms reduction and international law. Much to the chagrin of the rest of the world, Washington rejected the Kyoto Treaty on greenhouse emissions, dismissed the Biological Weapons Convention and refused to join the new International Criminal Court.

Issue by issue, one can argue whether those were the right or wrong decisions for America. But taken together, the damage Bush's go-it-alone attitude has wrought is impossible to overlook.

Despite a massive outpouring of sympathy for America immediately following September 11, Bush's "you're with us or against" approach to international affairs quickly alienated the majority of the world's population.

A recent poll by the Canadian opinion research firm Globescan asked some 34,000 people in 35 countries on their preferences for this year's US presidential race. An overwhelming 30 countries want John Kerry to win the next presidential election. In Germany, a whopping 74 percent of respondents were for Kerry, with only 10 percent supporting Bush.

In contrast, the latest opinion polls in the United States have Bush leading Kerry for the race for the White House. Why such a disconnect between US and world public opinion? It may be partly explained by the fact that most Americans are not confronted by the powerful antipathy for Bush and his policies that US citizens living abroad experience on a daily basis. Those back home also don't see the specter of rising anti-Americanism that Washington's arrogance has helped breed.

Like many overseas, I shuddered when long-standing allies France and Germany were branded as traitors for their reluctance to take part in Bush's war of choice in Iraq. There are myriad other examples of how the Bush administration has alienated much of the world, but the point is that such attitudes have seriously damaged America's standing abroad.

In Germany, the hard-left, far-right and anti-globalization groups can now freely peddle their own particular brands of anti-Americanism. Besides seeping into the mainstream media, anti-Americanism is becoming not only accepted, but normal. In central Berlin, no one bats an eye when a US flag is hung upside down and painted with the slogan "Against America." A direct result of Bush's unilateralism, it is now vogue simply to be opposed to the United States.

The complete lack of goodwill toward Washington is particularly worrying in light of the current disarray in Iraq and how badly the international community's help is needed there. The risk of a second term for Bush is that even if America makes progress in the war on terror, Washington will have lost the battle for the world's hearts and minds. For many Americans abroad, that danger is clear to see.

That's why John Kerry's comments that he would once again turn towards multilateral methods are encouraging. Not that electing Kerry could undo the damage to America's reputation overnight, but his plans to make more use of "soft" power to further the country's goals would be a good start.

Despite America's unprecedented military and economic might, the country still needs help from its friends and allies. Most don't even expect the United States to treat them as equals. They simply want to be treated with some respect.

Germans -- and much of the rest of the world -- would like to see a change in U.S. leadership as the transatlantic alliance drifts further apart, a number of recent studies show. (Sept. 9, 2004)

A Kerry Conundrum for Schröder

The overwhelming majority of Germans say they'd prefer John Kerry as US president instead of George Bush. However, having Kerry in the White House wouldn't necessarily make Chancellor Gerhard Schröder's life any easier. (Sept. 21, 2004)

Venezuela's team has brought in more players for Copa America after at least eight tested positive for COVID. And Brazil's president has been fined for flouting a mask mandate. Follow the latest with DW.