Opinion: Blame the Managers, Not the Country | Europe| News and current affairs from around the continent | DW | 15.10.2004

Opinion: Blame the Managers, Not the Country 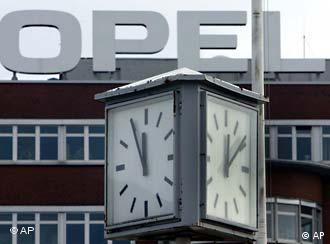 Time for a change at Opel?

The current crises didn't happen over night. In fact, they've been brewing for a long time. Which means that while the responsible manager long ago left the company and has begun to enjoy either his retirement pay or severance package, the workers are being held liable.

When nothing else will work, there is one thing left to do: a full-blown restructuring. Which inevitably means -- as in the case of Opel and KarstadtQuelle -- lost jobs, longer working hours, and pay cuts for the remaining workers in order to recoup the huge losses.

The assembly line worker or the salesperson may not have caused the problem, but -- sad to say -- they have to take the rap for it. The companies need to lower costs, as quickly and permanently as possible, in order for the banks to extend or raise their credit lines. The fastest, most effective way to do this is to cut personnel costs.

There is one thing Opel and KarstadtQuelle have in common: They missed development opportunities in their respective areas. In addition, there are specific problems.

For example, GM subsidiary Opel was for many years the cash cow of the world's largest carmaker. In Germany, it earned billions and jumped in to help when a financial crisis led to the restructuring of the U.S. parent company. Now, the money is lacking on this side of the ocean.

There are real problems at Opel, especially in terms of its image and its car models. The company builds mass-market cars for a middle class public, but these aren't selling well. Because on the one hand, demand is up in the premium auto market, which is BMW, Mercedes and Porsche, but not for Opel. On the other hand, the middle class is now divided into a number of niche markets, where Opel has nothing special to offer.

In addition, the parent company in Detroit thinks it knows more about the European car market than the Europeans do. And on top of all that, General Motors recently built a very modern car factory in Poland, which will be operated along the relatively low Polish wage scale. In terms of internal competition within the firm, then, German plants have a natural disadvantage.

KarstadtQuelle also made mistakes, which will only be made worse through the changes in their retail strategy. For years, German consumers have been reluctant to spend, and when they do, then it is increasingly at discount or specialty stores.

In a bid to control costs, they have responded by cutting back personnel and offering a mid-level assortment of goods. Which means in the end that customers wander aimlessly through enormous assortment of wares, without finding anyone to help them. Then they leave, irritated, without buying anything.

There is another way -- at least in some cases -- as exemplified by the top-flight department stores KaDeWe in Berlin and Alsterhaus in Hamburg. Their top quality goods and excellent service lures customers -- and makes a good profit -- despite high prices. Ironically KaDeWe and Alsterhaus are Karstadt flagship stores. Of course, this business model only works in the really big cities, where there are enough choosy customers who can afford to buy luxury goods. In small, provincial outlets, this plan would not work.

Opel and KarstadtQuelle have economic problems that are the result of poor decisions on the part of their respective upper management. With the new cost cutting concepts, the companies have laid the basis for urgently needed restructuring. Unfortunately, thousands of workers will lose their jobs in the process -- and the remaining workers will have to work under worse conditions. Those who got the workers into the mess came out of it unharmed.

The German government stays abreast of the problems, but otherwise stays out of it -- which is the right thing to do. The state isn't suited to repair broken business; note the example of Philipp Holzmann. In that case, German Chancellor Gerhard could only put off the building concern's ultimate breakdown, it couldn't prevent it.

Production halted Friday at the Bochum factory of troubled German car maker Opel as workers laid down tools for the second day in a row in protest against cuts. (Oct. 15, 2004)