After historically bad results at state elections in Baden-Württemberg and Rhineland-Palatinate, Germany’s conservatives must take a long, hard look in the mirror, says Marcel Fürstenau. 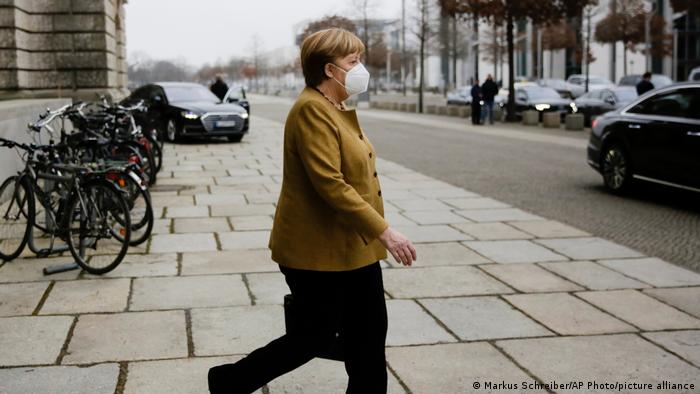 Angela Merkel's chancellorship is ending with her party in disarray

Never before has Germany's Christian Democratic Union (CDU) done this badly in Baden-Württemberg and Rhineland-Palatinate state-level elections. Gone are the days when both states were conservative heartlands that would regularly produce absolute majorities for the party. Now, the CDU has dipped below the 30% threshold in both states with results that are likely to inspire fear in many party members in view of the upcoming general elections in September.

With only half a year to go, the party needs to ask itself how it can regain voter trust, with nationwide opinion polls also suggesting it is losing support. Deutschlandtrend, which gauges political opinions on a monthly basis, puts the CDU and its Bavarian sister party the Christian Social Union (CSU) at a mere 33% approval rating. And recent revelations that lawmakers from both parties capitalized on mask sales for personal financial gain will surely exacerbate this downward trend. The scandal partly explains the CDU's bad showing at Sunday's state elections.

But it alone does not account for the party's poor performance. Malu Dreyer, the popular Social Democratic (SPD) state premier of Rhineland-Palatinate, would have surely triumphed again even without the CDU's miserable performance. The same applies for Baden-Württemberg's equally popular premier, Winfried Kretschmann from the Green Party.

The CDU is not even needed to form stable coalition governments in either state. Rhineland-Palatinate will mostly likely be governed for another legislative term by an alliance of SPD, Greens and the business-friendly Free Democrats (FDP). A similar three-way coalition would now be possible in Baden-Württemberg. Kretschmann could abandon his junior coalition partner, the CDU, with whom he has governed since 2016. After all, why join forces with such a weakened party?

The Baden-Württemberg Greens, however, have much in common with the CDU, sharing many of its conservative positions. That is why they make a good fit — and could well set an example for what may follow on the national level. The Greens are eager to be part of the federal government after September's general elections. And that is something they are only likely to achieve with the CDU/CSU bloc, because, despite its current failing ratings, there seems (so far) to be mathematically no alternative to a conservative-Green government in the post-Merkel era.

Merkel, who served as German chancellor for 16 years, will not stand for office after September's general election. Her party's drop in approval ratings recalls the last period of her mentor Helmut Kohl's term in office. Kohl held the chancellorship from 1982 to 1998, the same number of years as Merkel. He also left behind a badly weakened CDU, which ended up none too gently on the opposition benches that time around. This time, the conservatives can derive some comfort from the fact that the latest opinion polls give them sufficient support to retain control of the chancellery, provided both parties take immediate strategic steps to this end.

Above all, Germans and international observers want to know who will be following in Angela Merkel's footsteps should the conservatives lead the government after the September elections, despite the expected losses. CDU leader Armin Laschet and Bavarian state premier Markus Söder (CSU) are hot contenders. One of them will be nominated as lead candidate. The sooner the conservatives make their pick, the sooner they can make voters forget about prior scandals. Then the Greens would also know what to expect if the results allowed them to join a coalition.

German voters would also be able to think in more concrete terms about whom they think would be a better leader: Laschet or Söder. Either lawmaker would face the challenge of improving the tarnished images of their parties during the campaign, a task no one will envy them. But it is one that has to be urgently carried out, however the national elections turn out.

US has 'no better friend' than Germany, says US top diplomat Antony Blinken 15h ago

Coronavirus digest: Delta variant could make up 90% of Europe's infections 22h ago

Opinion: Euro 2020 — Germany got more than they deserved 11h ago