Investigators from the OPCW chemical weapons agency have been sent to the site of the Syrian air attack to interview survivors and gather samples. More accusations have been leveled during a special OPCW meeting. 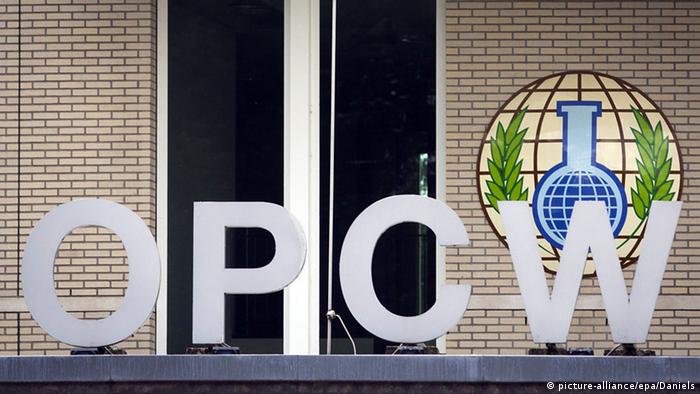 A special meeting of the 41-member Executive Council of the Organisation for the Prohibition of Chemical Weapons (OPCW) was held on Thursday in The Hague to discuss the attack on the north west Syrian town of Khan Sheikhoun earlier this month that killed nearly 90 people - many of them children.

The British Ambassador, Sir Geoffrey Adams, told the meeting that scientists in the UK have analyzed samples from the poison gas site in Syria's northwestern Idlib province and that they "tested positive for the nerve agent sarin, or a sarin-like substance." 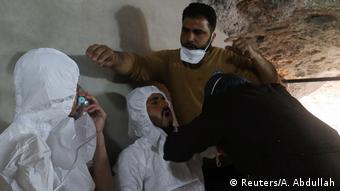 Men recovering from the airstrike attacks on Khan Sheikhoun

Adams' comments were confirmed by British Prime Minister Theresa May who said during a televised statement on Thursday: "We believe it is highly likely that the attack was carried out by the Assad regime."

"Apart from anything else, we believe it's only the regime that has the capability to make such an attack," May said.

Earlier this week, Turkish doctors said tests they had carried out confirmed that sarin gas was used.

The OPCW acts as a global watchdog and its member states "represent about 98 percent of the global population and landmass, as well as 98 percent of the worldwide chemical industry," the OPCW states on its website. Egypt, Israel, North Korea and South Sudan are not members but nearly 200 states are. The OPCW was awarded the Nobel Peace Prize in 2013.

Russia and Syria claim toxic agents were released from a rebel chemical arsenal hit by Syrian warplanes. On Thursday, in an interview with AFP, President Bashar al-Assad of Syria said the alleged gas attack which the US and its allies have blamed on the Syrian military was "100 percent fabrication."

A fact finding mission of OPCW scientists and investigators has been sent to Syria to interview survivors and gather bio-metric samples from the site. Director General of the OPCW Ambassador Ahmeet Uzumcu said at the close of the meeting in The Hague: "Our experts are fully aware of the significance of the task they are expected to fulfil and I am confident that they will do it in a professional and impartial manner using all available technical means."

The mission's findings are expected to be be reported in three weeks. The organization has not given any further details, saying it needed to preserve the integrity of the investigation and the safety of OPCW staff. 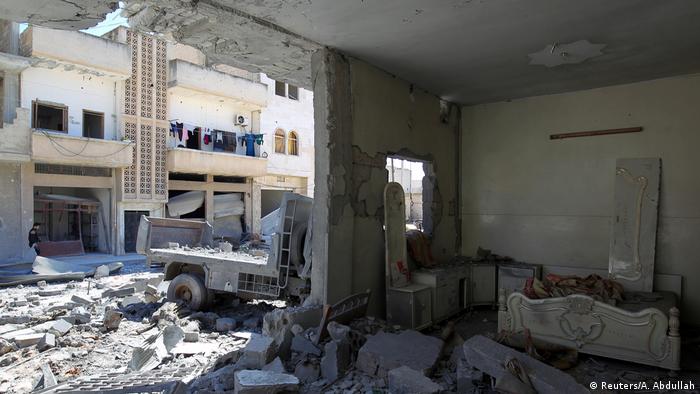 US and Russia at odds

US Ambassador Kenneth D. Ward accused the Syrian regime of still possessing and using chemical weapons. "On April 4, the lifeless bodies of innocent victims, grotesquely contorted and twisted by the nerve agent sarin, tell the real story," Ward told the meeting in the The Hague on Thursday. "Syria provided a grossly incomplete declaration to the OPCW of its chemical weapons program."

In retaliation, the US launched 59 cruise missiles on a Syrian air base. It was the first time that the US had deliberately targeted Syrian government forces.

Ward stated that the Syrian regime "continues to possess and use chemical weapons."

"This outrage is abetted by Russia's continuing efforts to bury the truth and protect the Syrian regime" from the consequences of using chemical weapons, he added.

On Wednesday, Russia vetoed a UN Security Council draft resolution on the attack.

Russian Foreign Minister Sergey Lavrov said Thursday that the OPCW inspectors should visit both the Syrian air base, which the US said served as a platform for the attack, and Khan Sheikhoun to get a full and objective picture.

"We are deeply worried by our partners in the UN Security Council trying to evade an honest investigation," Lavrov said.

Also on Thursday, the Syrian army claimed the US-led coalition against the so-called "Islamic State" had carried out an air strike in the eastern Deir al-Zor province late on Wednesday night. The statement from Damascus claimed the strike had hit poison gas supplies, causing the deaths of hundreds of people.

Responding to the report, US Air Force Colonel John Dorrian said it had carried out no air strikes in the area at the time. "The Syrian claim is incorrect and likely intentional misinformation," Dorrian said in an email to Reuters.

The Russian defense ministry said it had no information about casualties in the Deir al-Zor attack and had sent drones to check the area.