Fans can vote for their favorite photos examining human rights and globalization until May 20 to decide the 30 finalists. Amnesty International is partner of the DW initiative. 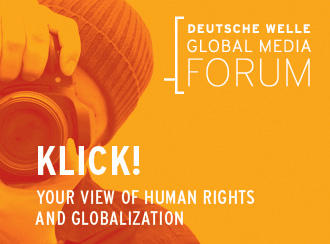 The voting phase for the photo competition "Klick! – Your View of Human Rights and Globalization" has officially started. This competition was developed by DW with the help of Amnesty International as part of the upcoming Deutsche Welle Global Media Forum. Fans can vote for their favorites online until May 20 at www.facebook.com/dw.gmf.

All of the entries have been uploaded to an album on Facebook and users can mark their favorites by clicking the “like” button. They can also submit a vote for their favorites by sending an e-mail to klick@dw-world.de. On May 20, organizers will count votes to select the 30 finalists.

The competition called for professional and hobby photographers from around the world to submit photos that deal with human rights and globalization. The entries were also included in an interactive map at www.dw-world.de/klick.

The final 30 will be exhibited at the Global Media Forum in Bonn, where the approximately 1,500 Global Media Forum participants and guests will select three winners. These winners will receive an iPod Nano (8 GB), an iPod Shuffle (2 GB) and a USB stick (4 GB).

Amnesty International is a partner of the fourth Deutsche Welle Global Media Forum which will examine “Human Rights in a Globalized World – Challenges for the Media”.

Partners of the Deutsche Welle Global Media Forum 2011 include the OSCE, the Council of Europe, the Friedrich-Naumann Foundation, the Konrad-Adenauer Foundation, the German Institute for Human Rights, Reporters Without Borders, GIZ, UN Water, the European Council on Foreign Relations, European Union Agency for Fundamental Rights, the German Development Institute, CARE Germany-Luxemburg, the Development and Peace Foundation, the Bonn International Centre for Conversion (BICC), the Goethe-Institut, the German Journalists Association and many other organizations.

Six of this year’s partners have been included in the University of Pennsylvania’s list of 50 leading think tanks.

DW will also be awarding the winners of its international blog awards, The BOBs, at this year’s Deutsche Welle Global Media Forum. This is the contest’s seventh year and prizes will be awarded in six categories and 11 languages.

Co-host of the Deutsche Welle Global Media Forum is the Foundation for International Dialogue of the Sparkasse in Bonn. The convention is also supported by the German Federal Foreign Office, European Funds for Regional Development, the Minister of Federal Affairs, Europe and the Media of North Rhine-Westphalia, the city of Bonn, DHL and the Federal Ministry for Economic Cooperation and Development.

Klick! - Klick! – Your View of Human Rights and Globalization

The photo competition from the Deutsche Welle Global Media Forum.