Anti-racism campaigners in Brazil are plastering racist Facebook and Twitter comments on billboards - close to the homes of those who originally posted them. They say it's already working. 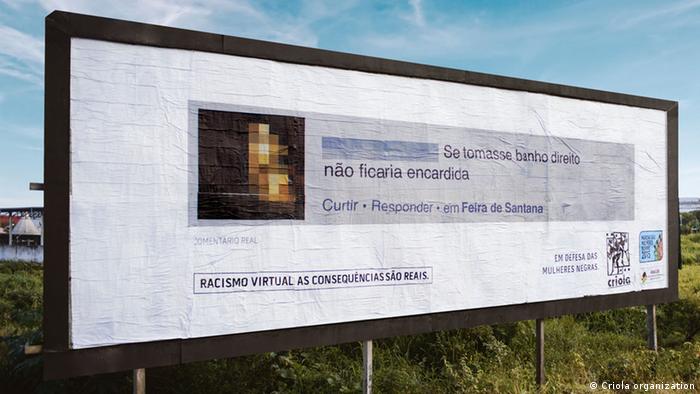 Is real-world shaming the answer to online racism?

That's the approach being taken by "Virtual Racism, Real Consequences," a Brazilian project which takes public Facebook and Twitter comments and strategically places them on billboards close to the homes of the people who wrote them.

Moacyr Netto, the vice president of the Brazilian ad agency W3haus, who came up with the idea for the campaign, told DW that he and his colleagues didn't even need to use geo-tagged data to discover where the commenters live.

"First we started checking on Facebook," he said. "Then we checked which pictures the person had posted - if we could recognize the location. Then we started investigating friends and other platforms. Since we knew the person, we then went to Twitter and Instagram and then crossed all this information to get the location."

The blown-up comments were then posted to billboards close to that person's home - but not directly alongside it. 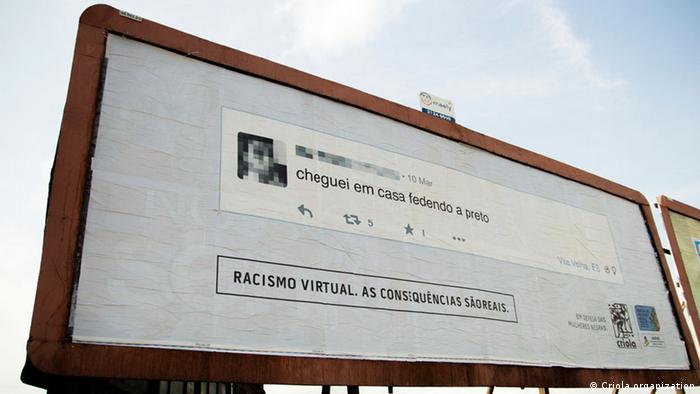 'You're taking a risk'

Though the users' faces and names have been pixilated to protect their identities, one concern is whether they might still be recognizable to those who live nearby - and might even face violent retaliation.

Netto does not share this concern. He says the pixilation sufficiently conceals the users' identities. And anyway, he adds, they're posting the comments publicly.

"Racism is a crime in Brazil. You're taking a risk. And people don't know that," he said. "So the campaign is helping to spread the message, 'This is a crime.'"

The project is being carried out in conjunction with the Criola organization, which defends black women's rights in Brazil. Two pieces of online evidence suggest the project is having an impact in the country.

The first is a Google Trends spike in Brazil for the term "racismo virtual." Brazilians are now talking about virtual racism online.

The second effect, says Netto, is that some of the authors of the original racist comments have since deleted those tweets and Facebook posts.

"They know what we're doing," he said. 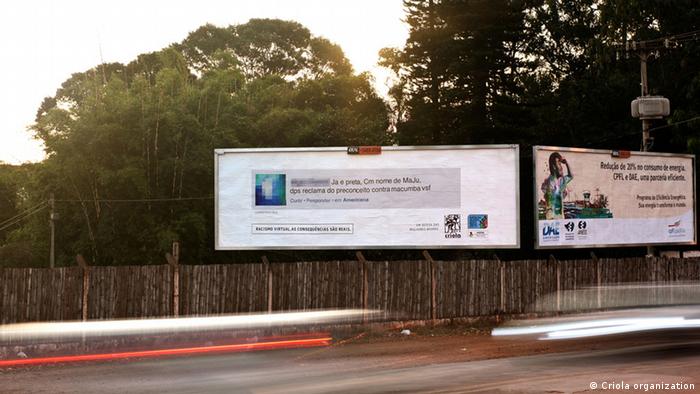 The idea for the offline campaign began in July, when a Facebook Post featuring Afro-Brazilian meteorologist Maria Julia Coutinho received 20,000 comments and was liked more than 45,000 times. Many of the comments were racist - even if the most highly upvoted comment was to inform others that racism is a crime in Brazil.

Still, the volume of racist comments - and the public forum in which they were posted - left Netto and his team at the W3haus agency wondering what they could do.

"Our background is digital. So everything related to digital culture, we tend to do something about it. We got together in the agency and decided to do something to stop these racist comments," he said.

They first started talking about how it feels to receive a racist comment online. Is it different because it's online? Or is the impact similar? They felt, having spoken to people impacted by it, that the effect could at times be bigger online.

"You receive a lot of comments at once. So that was where we started with the idea: 'How do we make everyone see that the impact is real?' It doesn't matter if you did it online or not. So then we came up with the billboards idea."

Just days ago, a billboard supporting an "end to privileges for handicapped people" caused outrage in the southern city of Curitiba - until just one day later, when the city's own municipal council for handicapped rights unveiled that they had placed the ad there to provoke discussion.

Their point: Since many Brazilians illegally park in handicapped spots or complain about legal rights for handicapped people, why the (hypocritical) outcry at such a billboard?

"The more people talk about it," he says, "the less the offenders feel free to do it."

African American civil rights protesters in the 1950s and 60s used the power of television to help their cause. Now one year after the death of Michael Brown, social media is powering the Black Lives Matter movement. (10.08.2015)

Police have raided buildings in the German capital in a crackdown on far-right hate speech. Officers confiscated smart phones and computers and urged social networks to help slow the spread of xenophobic content. (12.11.2015)

A Facebook video gone viral has left Apple fielding accusations of racism after an Australian employee could be heard asking six black schoolboys to leave a store in Melbourne, citing concerns they would shoplift. (12.11.2015)