On the front line: The volunteers defending Kyiv | Europe | News and current affairs from around the continent | DW | 26.03.2022

On the front line: The volunteers defending Kyiv

When Russia launched its war on Ukraine, hundreds of thousands of Ukrainians volunteered to fight. They say they want to defend their freedom. Many have been deployed around Kyiv. 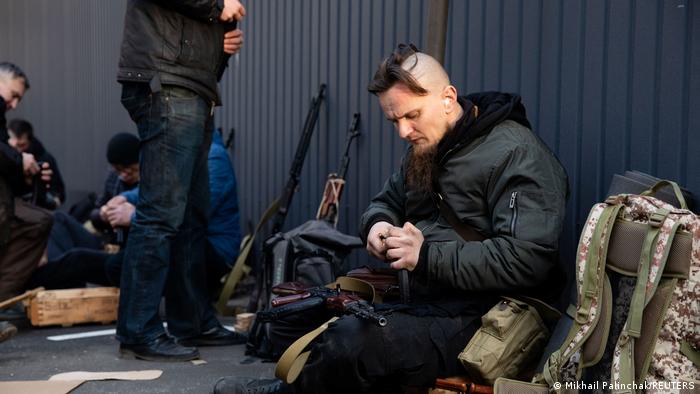 Immediately after the first air raids by Russian bombers on Ukrainian territory on February 24, Ukrainians started showing up in large numbers to register for military service. Within days, the first in line had already been fully mobilized.

At the same time, territorial defense units were being established in towns and cities. Even men and women who had no combat experience or even basic military training took up arms.

From selling furniture to launching grenades

"Tornado," 35 — who doesn't want to give his real name for security reasons — is a fighter with a Kyiv territorial defense brigade. In 2014, before the fighting in Donbas, he moved from Luhansk to Kyiv, where he established a successful furniture sales business. But on February 24, when the first Russian bombs shook the Ukrainian capital, he volunteered to join the Territorial Defense Forces.

"I'm furious that some aliens are trying to enslave me. I am not a slave, I'm a free man!" he said. "I had no choice but to stockpile food for my wife, my son and our pets, pick up a machine gun, and crush the invaders."

It was only when he was deployed to his post that experienced fighters taught him how to shoot. "In the beginning, it was chaotic. We had to stay outside night and day, sleeping on concrete. Men who had combat experience shared preserved food with the inexperienced ones, like me. They taught us how to shoot, dig trenches, and organize the defense," said Tornado. The skin on his face and body started peeling off in the freezing temperatures; it cracked particularly badly on his hands, which still haven't healed. The lack of washing facilities is also a problem. 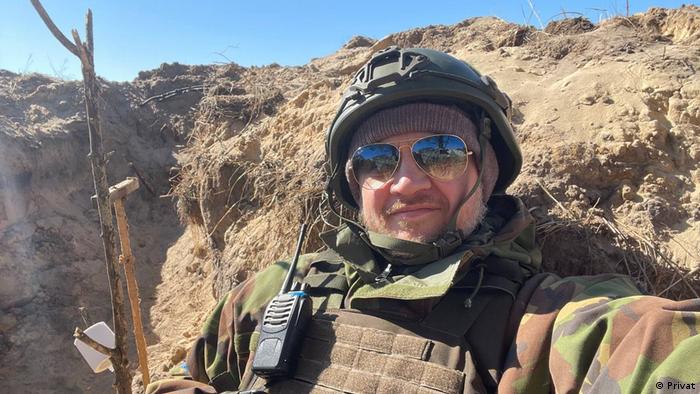 Seven men in his unit couldn't take it; they left, but Tornado stayed. Right now, he is guarding a "strategic facility," and can sleep in a heated room. Other fighters and volunteers are providing him with food.

"The Ukrainian army only gave us sleeping bags and thermal underwear. It's all very good quality. But it wasn't until March 3 that we got military uniforms; before that, we were in civilian clothing. Now we also have a doctor, lots of medicines, supplies of socks and other things. But we still need ballistic eyewear, gloves, bulletproof vests and helmets," he said. 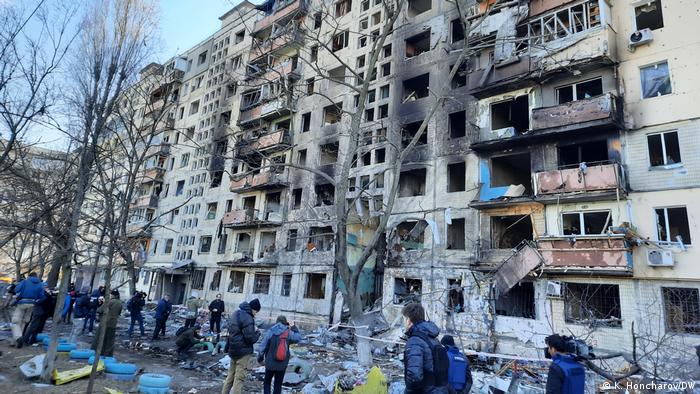 Kyiv's northern and western suburbs have been heavily bombarded

Before war broke out, 40-year-old Oleksandr Kolot worked for an IT company. He was woken by the sound of explosions in the morning of February 24, and went to report for military service the same day, but the office was closed.

From the men gathered there, he heard that Russian troops were expected to break through in Obolon, a suburb in the north of Kyiv. He also heard that authorities would be distributing weapons to residents of the capital there on the street — but he didn't get one, as there weren't enough. Then he saw some men in civilian clothes who were building a barricade, and joined them. He spent the whole of that night digging trenches and then stayed on with them, which was how he became part of the Territorial Defense Forces.

"At first we were on our own," explained Kolot. "Then we were joined by men who already had a contract with the Territorial Defense Forces. The rest of us were able to sign a contract two weeks later, when we got a commander who was connected to the army." He said that, unlike the Ukrainian army soldiers, the Territorial Defense volunteers are not paid and are free to resign at any time. 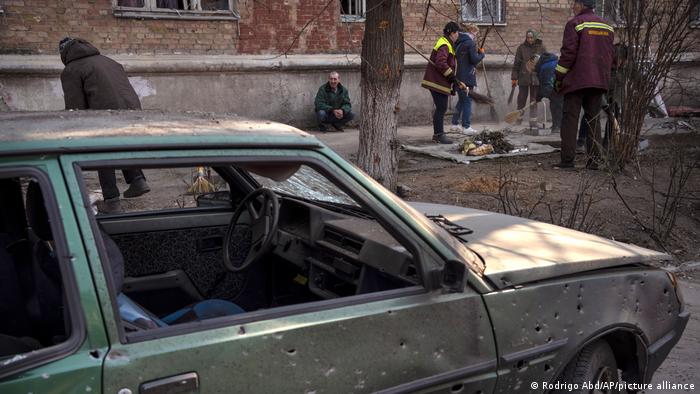 "In the beginning, it was hard to get used to only being able to sleep when the chance arose, not when you wanted to. I've got used to it," said Kolot. He now has a Ukrainian army uniform, but he sourced and paid for his own bulletproof vest. He really appreciates the help provided by civilians who have stayed in Kyiv. They bring tea and coffee for the men of the Territorial Defense Forces. Volunteers have also set up a field kitchen to feed the soldiers.

"In my unit, most of the lads who have combat experience and have already fought the Russians are from Donbas. Some are from Kherson, a few from Odesa," he said. "There are some political differences of opinion, but we don't pay any attention to that now. We're all like brothers here."

'Everyone is on the front line'

The most dangerous emplacements in Kyiv are those in the northwestern suburbs of Bucha, Hostomel and Irpin, where there is fierce fighting. "Everyone is on the front line — soldiers, national guard, border guards, Territorial Defense, police, Ukrainian security services, secret service agents, volunteer battalions," said 62-year-old Yuriy Kulachek, a reserve major in the border service. "There are young people who have only ever seen a machine gun in defense class at school. They're preparing to go into battle alongside experienced fighters."

Before the war, Kulachek had a company that dealt with the extraction of granite. He defended Ukraine in Donbas for two years, then retired. After the events of February 24 he returned to his unit, and is now defending the suburbs of Kyiv near the freeway that heads west to Zhytomyr.

"The unarmed civilians taking to the streets to protest against the invaders in Kherson, Melitopol and Berdyansk give us strength," he said. "We're also spurred on by the bravery of the refugees from occupied Hostomel. And civilians see us setting an example in fighting the Russians. This way we all give each other so much strength and energy, it's incredible."

Kulachek added that all the colleagues who, like him, retired from military service back in 2016 are now back on the front line, regardless of age — proof, he said, of the defenders' great fighting spirit.