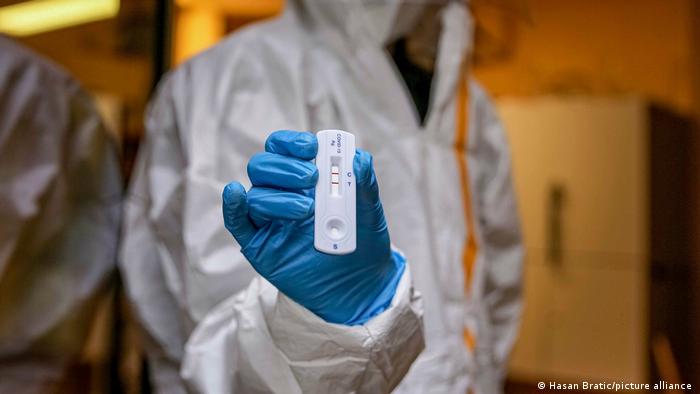 As omicron case numbers skyrocket and health care systems threaten to give way, the German government is changing its COVID-19 testing strategy.

Last week, testing labs reached 86% of capacity, according to the country's Association of Accredited Laboratories. Meanwhile, the German health minister — a trained epidemiologist — predicted that the number of corona infections could reach a high of 600,000 per day by mid-February.

Until last Saturday, anyone who tested positive via a rapid antigen test was told to confirm their positive result via a polymerase chain reaction (PCR) test.

Now, only medical staff and people considered vulnerable will be eligible for a PCR test.

Health officials are now advising people who test positive but show no symptoms, as well as those who are close contacts or who receive high risk warnings in the Corona-Warn-App, to rely instead on "high-quality antigen tests."

But how accurate are rapid antigen tests?

With an accuracy nearing 100%, PCR testing is the gold standard for diagnosing SARS-Cov-2. It tests the genetic material in a sample, which helps it detect even the tiniest traces of the virus. Many official processes require a PCR test result as proof of a positive or negative result, including insurance claims and entry into certain countries.

But high accuracy demands highly trained laboratory technicians, special equipment and time — all of which are scarce resources in a rapidly evolving pandemic.

Rapid tests, on the other hand, take about 15 minutes and can be done by people at home. They detect small SARS-CoV-2 viral proteins, called antigens.

But, unlike PCR tests, the accuracy of rapid antigen tests varies widely.

For starters, they are most sensitive in the acute phase of an infection (when someone's viral load is at its highest), even though studies show the virus spreads at medium-to-low viral load. Secondly, many of the rapid on the market aren’t regulated. 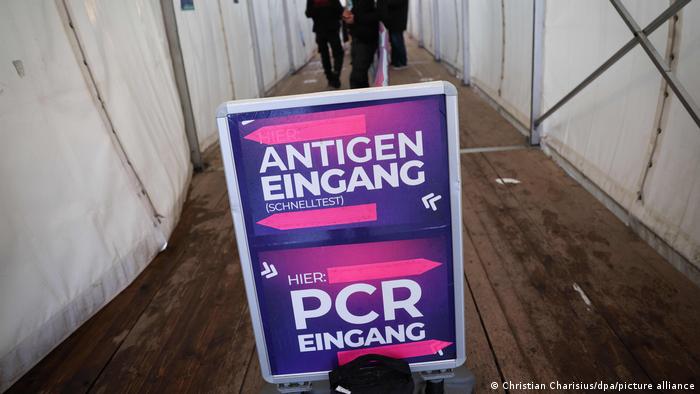 Germany can manage 430,000 PCR tests per day, compared with almost 1 million a day in the city of Vienna, Austria

A German preprint study released in August found that two of the most common rapid tests available in Germany were only 60% effective — they missed four in every 10 people who tested positive for coronavirus with PCR tests. The researchers found that only people with a very high viral load tested positive via the rapid tests. The results also suggested that the tests had a significantly lower sensitivity to new coronavirus variants like omicron.

A larger, more recent study published in November and carried out by the Paul Ehrlich Institute, Germany's federal institute for vaccines and biomedicine, found that 96 out of 122 rapid antigen tests available were at least 75% accurate. Once again, the rapid tests were found to be far more sensitive to high viral loads.

Studies investigating the effectiveness of rapid antigen tests in detecting the omicron variant are currently being carried out, Health Minister Karl Lauterbach said in early January. Currently, omicron accounts for about 44% of coronavirus infections in Germany, according to the Robert Koch Institute, the government agency in charge of disease control and prevention.

What can you do without access to PCR testing?

Health officials recommend doing more than one rapid antigen test to ensure higher accuracy, especially if you test positive, and to look for better-performing brands that have proven sensitivity. That goes for both professional and self-administered rapid tests. The German Federal Institute for Drugs and Medical Devices lists all approved antigen tests and their accuracy.

Starting in May, regulations will change in the European Union, requiring that each company that manufactures coronavirus tests for sale in the EU have its products tested in a laboratory and the results independently verified. Currently, rapid test manufacturers can self-certify.

In the United States and Australia, strict regulation of rapid tests has in part led to a short supply of the tests and high costs. In India, rapid antigen tests are similarly unregulated and often inaccurate, while many other countries in the Global South struggle to stock any at all.

Without access to PCR testing, many people living in Germany will struggle to fulfill the strict requirements of border entry into other countries, as well as to file insurance claims or gain proof of "recovery" status unless the German health agendy changes its criteria.

Though Germany is rationing its PCR tests, other EU countries are ramping up their testing capacities.

Austria is managing about five times as many PCR tests as Germany. Its capital, Vienna, is carrying out more than the whole of Germany — currently about 2.4 million per week, compared to 2 million in Germany. They are also far less expensive — available for €6 ($6.80) in Vienna, compared with €50 to €70 in Germany.

According to the RKI, Germany is currently capable of doing about 430,000 PCR tests per day. In the United Kingdom, which has a similar population size to Germany's, the daily PCR testing capacity is reaching about 1 million. Denmark, Greece and France are also handling far higher testing numbers.

How dangerous is the new omicron sub-variant? Epidemiologist Tobias Kurth speaks to DW