Krystsina Tsimanouskaya lost a legal bid to continue running in Tokyo 2020 after what she described as a "kidnapping" attempt by Belarusian authorities. 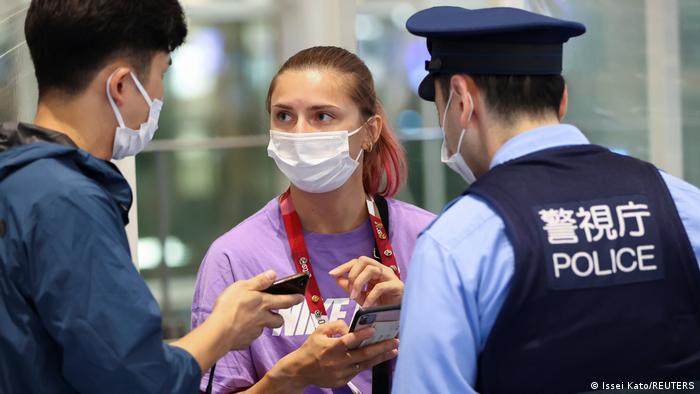 Tsimanouskaya sought and got protection from Japanese authorities

The International Olympic Committee (IOC) has opened a formal investigation into the case of Belarusian sprinter Krystsina Tsimanouskaya, a spokesman announced Tuesday.

Tsimanouskaya had refused her team's order to fly home early from the Tokyo Games after criticizing Belarusian sports officials. She was granted a humanitarian visa by Poland after accusing Belarus officials of trying to kidnap her.

What did the IOC say?

IOC spokesman Mark Adams said Olympic organizers needed to "establish the full facts" and "hear everyone involved" in the case.

The committee said it was expecting a report later in the day from the Belarusian team on the case.

The IOC also contacted Poland's National Olympic Committee to discuss how to support Tsimanouskaya in the future, Adam said.

Can Tsimanouskaya still run in the Tokyo Games?

The International Court of Arbitration for Sport (CAS) rejected an urgent appeal by Tsimanouskaya for her to be allowed to compete in the 200-meter heats at the Games. She was previously excluded from the event by Belarusian authorities.

The court said it turned down Tsimanouskaya's application on the grounds that she had not been able to prove her case. 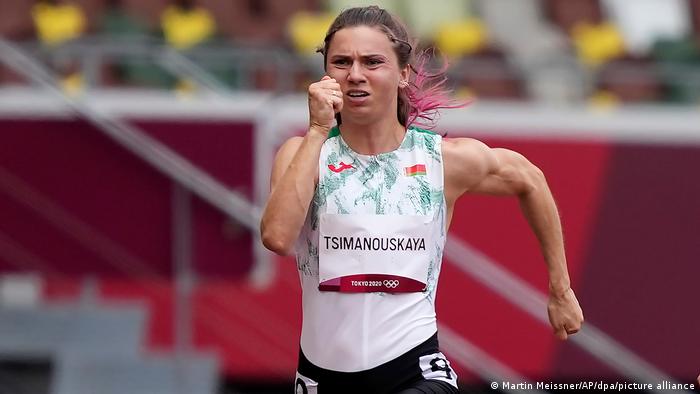 Tsimanouskaya competed in the 100-meter on Friday

The Belarusian Olympic Committee said Tsimanouskaya had been examined by a doctor and would not participate in the 200-meter heats because of her "emotional-psychological condition."

Tsimanouskaya denied the allegations and told the radio station Euroradio in an interview: "They just told me to pack my things and fly home."

Global Athlete, an athlete-led activist group, decried "The alleged kidnapping of Belarusian Olympic athlete Krystsina Tsimanouskaya by the Belarus National Olympic Committee (NOC)," calling it "yet another example of the alarming athlete abuse occurring in Belarus."

The group has demanded the IOC suspend the Belarus NOC and allow team members to compete as neutral athletes.

What did Japan say?

Japanese Foreign Minister Toshimitsu Motegi on Tuesday assured that Tsimanouskaya was in a "safe situation."

"We, in cooperation with relevant parties, are trying to keep her safe [...] She is now in a safe situation," Motegi told a regular news conference.

Olympics organizers also said they had spoken with Tsimanouskaya twice on Monday and that she was safe.

The athlete's plight is the latest international scandal to hit Belarus, which has faced a backlash from the international community over a crackdown on human rights.

"Such actions violate the Olympic spirit, are an affront to basic rights, and cannot be tolerated," Blinken said on Twitter late on Monday.

Poland's Prime Minister Mateusz Morawiecki described it as a "criminal attempt to abduct an athlete critical of the Belarusian regime."

Tsimanouskaya was one of more than 2,000 Belarusian athletes to sign an open letter calling for new elections in her country and the release of political prisoners.

This "act of aggression by Belarussian security services on Japanese territory" must be met with "resolute opposition from the international community," Morawiecki said on Facebook, adding that the Olympics should be a symbol of peace and fair play.

When DW spoke with Polish Deputy Foreign Minister Marrcin Przydacz about the incident Tuesday, he said it was "the right decision" to grant Tsimanouskaya a humanitarian visa.

He also acknowledged Poland's obligation to protect her against any future retribution: "I would say Eastern intelligence is very active on European soil and we need to be aware of that. And we need to protect not only our people, but also our guests."