'Old Town Road' rapper brushes off homophobia after coming out

Celebrities have rallied around US rapper Lil Nas X after he came out at the end of June. While the "Old Town Road" artist's announcement garnered a lot of support online, he has also faced a barrage of homophobic abuse. 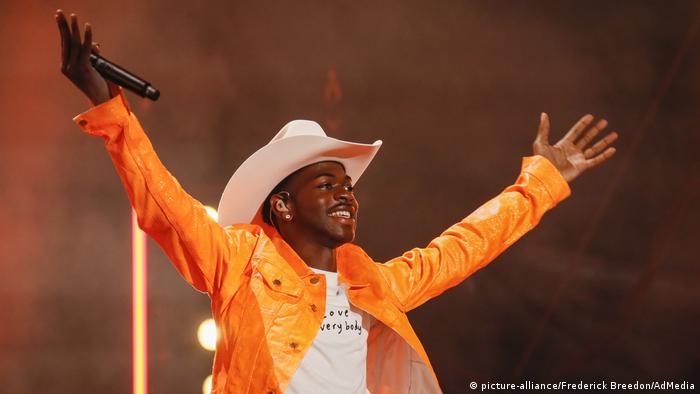 Lil Nas X, the US rapper who has risen to global fame with his country-rap hit "Old Town Road," has been fending off homophobic remarks with humor since coming out as gay in recent days.

The 20-year-old Atlanta rapper, whose real name is Montero Lamar Hill, made the announcement on June 30 to coincide with the end of Pride Month.

He made the reveal in a song he posted to Twitter, later adding a picture of the album art to his "7" EP that shows a rainbow-hued skyscraper, adding "thought I made it obvious."

The announcement sparked an outpouring of support on social media, but also came with a barrage of homophobic comments, memes and GIFs under his posts on social media.

Several users also posted alternate versions of Lil Nas X's song "Old Town Road" where his cowboy-country influenced lyrics have been altered in an attempt to make fun of his sexuality.

The song has become a popular summer hit in Europe, currently sitting at number 3 on the German charts.

Lil Nas X has been fighting fire with fire — posting sarcastic responses, calling out "homophobic" comments and highlighting supportive remarks from others.

"Old Town Road is literally about horses," he wrote in one post.

'Don't let these fools get to you'

"Focus on all the good in your life. Don't allow these fools get to you. It's a lot of us out here proud of who and what you represent," the NBA player wrote in an Instagram comment.

Singer Miley Cyrus also voiced her support for Lil Nas X, who she recently performed with at the Glastonbury Festival in the UK.

"I'm so proud of my baby brother ... In your corner forever my friend!" Cyrus wrote.

Cyrus' father, Billy Ray Cyrus, is featured on "Old Town Road," which has dominated the airwaves for the past few weeks not only in the US, but abroad as well.

"Old Town Road" has been number one the charts in the US for the past 13 weeks — longer than any other hip-hop record.

Each year, Lesbian Visibility Day on April 26 gives prominence to an often unseen minority. In Weimar Berlin, before the Nazis seized power, writer Ruth Roellig put same-sex female desire on the map for the first time. (26.04.2019)