India has a fast growing economy and a booming population. In a bid to decrease reliance on expensive energy imports, the government has started extracting oil locally. Farmers fear the drilling will destroy their crops. 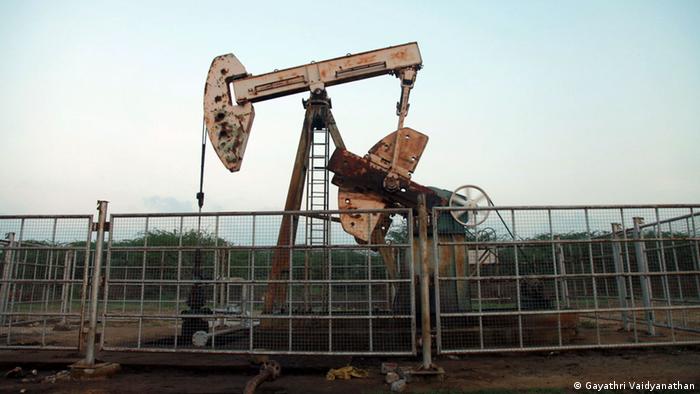 It's a warm January afternoon in Nagapattinam in southern India. Dense rice fields populate the rural landscape, and there's a strong smell of petrol in the air.

An underground crude oil pipeline ruptured in this spot about one year ago, explains local farmer Dhanabalan, as he points to the earth beneath his feet. With him is Amit Tiwari, a doctoral student studying oil spills who has come to collect samples.

"It's not petrol, it's diesel, crude oil," says Tiwari. "You can see the patches of dark black color in soil."

In amongst the rice fields, there are small, fenced-off sections of land with oil well pipes jutting out. India is a fast growing economy, but nearly all the oil it needs is imported. A push to exploit resources locally has seen drilling operations pop up in this delta zone, where the Cauvery River meets the sea.

There are nearly 300 oil wells in this area. Crude oil is pumped from the wells into underground pipelines that lead to collection tanks and eventually to a refinery. But in November 2012, one of the pipelines broke.

Sludge in the water supply

Dhanabalan remembers noticing something was wrong, even before he saw the oil seeping from the pipes. Large flocks of birds were swooping down and gathering over a patch of land, he says. 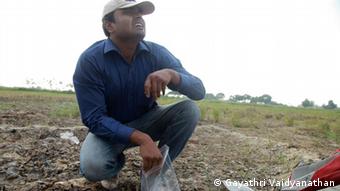 "Insects and worms in the soil tried to escape the oil and rose to the surface. And the crows and sparrows came to feed. When we came to see what happened, the stench of oil was everywhere," he says.

In the beginning, a sludge of crude oil spread across the rice fields. Then it entered the main irrigation canals, explains Dhanabalan. "The oil came here and flowed along this channel killing the fish larvae and the baby crabs that breed here."

Hundreds of hectares were contaminated. After the spill, the Oil and Natural Gas Corporation (ONGC), an Indian state company that drills in the area, sent laborers to scoop up the oil with shovels and buckets. Farmers were paid about 120,000 rupees (1,450 euros/$2,000) per hectare in compensation.

Slick still not cleaned up

An ONGC company spokesperson told DW most of the contaminated soil had been scooped up, but some oil had penetrated deep into the ground. When the monsoon rains arrive each year, the trapped crude can rise back up to the surface, he said. 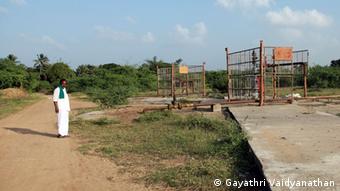 Dhanabalan walks near oil wells that pump beside his crop fields

"The government and oil companies are very knowledgeable in handling ocean spills. But I think when it comes to onshore spills, they are totally unprepared," she said, explaining that the only way to clean up a spill beneath a rice field is to remove large chunks of soil, heat it, or rinse it with chemicals.

Spills on land like the one at Nagapattinam's rice fields create tiny droplets of oil that fill the pockets of space in the soil, blocking the entry of air and moisture. This is bad news for crops, which could have lower than average yields, before eventually dying, explains Nambi.

“Definitely the growth will be stunted, the yield will go down and with prolonged exposure maybe the plant will not survive.” She says it can take years, or decades for all the oil to be completely flushed out.

Back in Nagapattinam, it's almost nightfall. A pumpjack heaves and lifts as it pushes oil out of a well. Locals here complain that while the oil is extracted here, the benefits go elsewhere - to the government, and the big cities.

ONGC pays a royalty of 3 billion rupees (36 million euros) to the state government each year, and according to the company spokesperson, it's the state's responsibility to use those funds for local development. 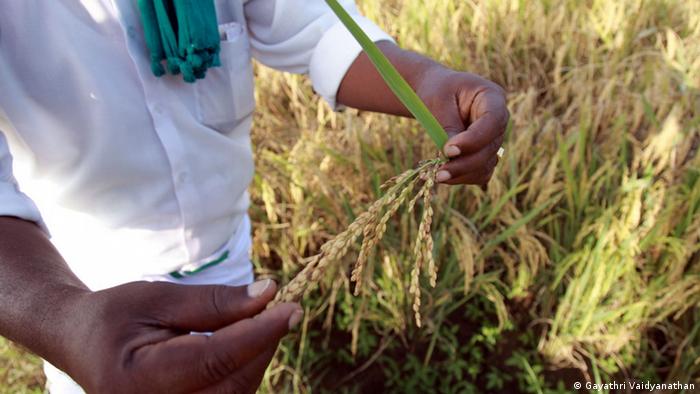 Farmers groups aren't pleased with that arrangement, and they fear any further drilling will only worsen the situation. Many have worked on the land for generations, and have become increasingly vocal following the drilling activity in recent years. Water for their crops is in short supply, and they want the government to act.

"Last time we protested with 1,000 people," says one farmer, wearing a green cloth to symbolize the farming brotherhood. "It's our land and our water. We won't let them take it away."

It's not only oil that's making the farmers anxious. Geologists recently found a vast amount of methane gas, another energy source, trapped in a coal seam in Nagapattinam.

The methane lies in underground seams or columns that contains freshwater. To get it, companies drill into the seams and extract the water - this drops the pressure and frees the gas. The farmers worry their remaining water supplies will be destroyed. 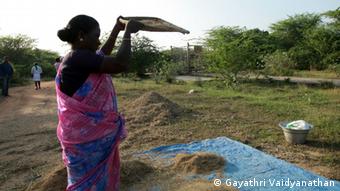 Is it safe for farmers to work in this oil-contaminated region?

"The movement has to continue. This is our environment, land, and water, we will succeed in our mission to protect it," says the farmer.

They are hoping to be heard as India's general election pushes ahead. They want the government to block all new oil and gas drilling projects in the delta region, but they're facing an uphill battle. India's population is booming and using gas or oil from the country's own ground supplies means less reliance on expensive imports.

Two pipelines that are being built to establish Myanmar as a regional trade hub have stirred tension among the local populations, who see their livelihoods threatened. They are calling for a stop to the project. (31.05.2013)

According to the International Energy Agency, energy consumption is set to double by 2050. Demand is growing all over the world and especially in energy-ravenous India and China. (22.03.2011)