British offshore investment fund Taliesin has told tenants in one of its Berlin buildings it is raising rents via energy-saving renovation. Critics say Berlin property has become an "Eldorado" for financial speculators. 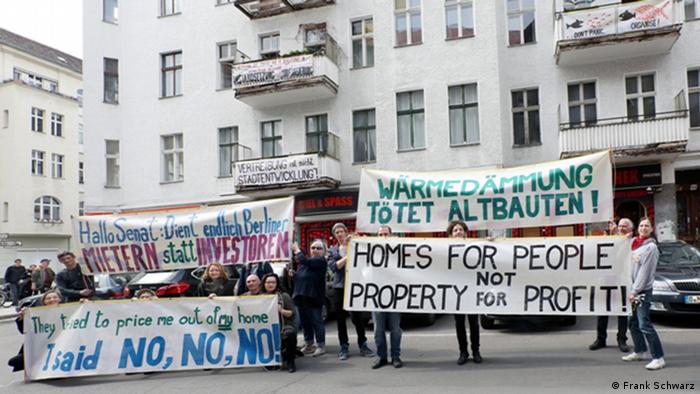 A British offshore investment fund, set up specifically to exploit Berlin's property market, is using unnecessary refurbishments to boost rent prices by up to 80 percent, according to tenants of three buildings in the city's central Kreuzberg district.

Both residents and opposition politicians in the German capital are calling the case an example of how property speculators are able to use environmental loopholes to bypass Berlin's rent cap and exacerbate the shortage of affordable housing in the city, where rents have risen by up to seven percent in the past two years.

Jersey-based property fund Taliesin, which owns Eisenbahnstrasse 44 and two adjacent buildings on Muskauerstrasse, wants to clad the walls of the buildings with insulation and replace all the windows, at a cost of nearly 26,000 euros ($30,000).

This would exempt the building from Berlin's rent cap, which was introduced last June. The costs would be passed on to the tenants. According to the calculations of 13-year tenant Giles Schumm, this will result in an 80-percent rent increase for some residents, which few will be able to afford.

A handful of the tenants made their fears public early this month, organizing a protest on the street outside their homes and holding banners that read: "Thousands of Berliners driven out - Politicians, where are you?" and "Homes for people, not property for profit!" 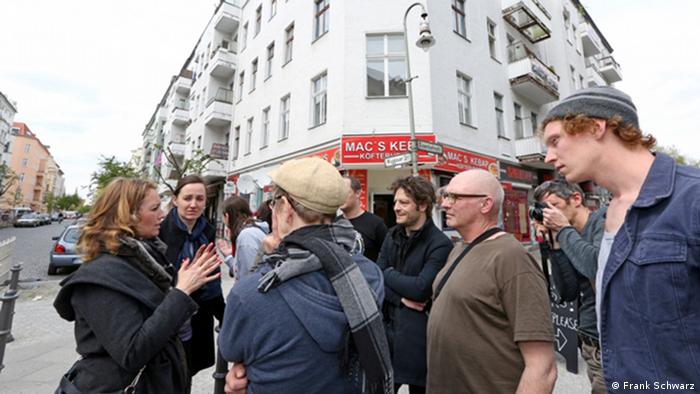 MP Caren Lay (left) spoke to tenants at the protest

No maintenance, plenty of renovation

But Schumm, sitting in his kitchen over a cup of tea, also had other worries: "There's an electrical socket open in my child's bedroom - I have no idea whether it's live or not," he said. "I called the building management company several times about it, and they haven't come and fixed it."

Schumm also says the company's applications for renovation permission were inaccurate. "They said the walls are thinner than they are, and they left out the fact that the cellar windows are broken in and the roof leaks, which they have no plans to fix yet, so where is the energy saving there?" he told DW. "That's maintenance, and they can't pass that down to tenants. That's just their job - that's what they're supposed to be doing with the profit from our rent."

Schumm doesn't even believe that the planned insulation will save energy, given the age of the building and the thickness of the walls - and anyway, the cladding needs to be replaced after 20 years.

"Of course saving energy in itself is good," said Caren Lay, German MP and Left party spokeswoman for housing policy. "But from a technical point of view it's very dubious. Instead of insulating the windows and doors, where you can do a lot with relatively little expense, whole buildings have to be decked with styrofoam, and it's highly debatable whether that's even the right thing to do, or whether it causes mold etc."

Taliesin Germany owns around 50 buildings and some 1,500 residential and commercial units in Berlin, and the fund is pretty blunt about its plans: "Taliesin's strategy has been to buy portfolios and individual buildings directly from owners or out of administration," the firm's website says. "To maximize capital appreciation, Taliesin undertakes various degrees of refurbishment on the properties as a means of driving up rents." The company itself did not respond to requests for comment.

"Of course the fears of the tenants are completely justified, and sadly this isn't an isolated case in Berlin," said Caren Lay. "Berlin has become an Eldorado for financial market speculators, and this is a good example of it."

Central districts like Kreuzberg have become particularly fertile ground for developers, and tenants in several buildings are complaining of rent rises caused by "energy-saving" refurbishment. "Flats in my house in Schlesische Strasse are threatened with massive rent raises too ... Up to 70 percent and more within a year, under the guise of energy saving actions etc. Real shame this seems to be legal," another Kreuzberg resident told DW.

Carsten Brückner, co-chairman of the property owners' association Haus + Grund, said he had sympathy with the tenants, because often the renovation was more expensive than the energy saved. But he put the blame not on investors, but on environmental regulations that force energy-saving alterations.

"Owners are under a lot of pressure from the authorities to reduce emissions," he said. "These high standards are counterproductive - they damage the investments in new buildings, and old buildings often can't be insulated anyway."

In any case, as local councillor Hans Panhoff said, the environmental regulations only relate to roof and cellar insulation. "No one is going to force you to put cladding on the walls," he told DW. 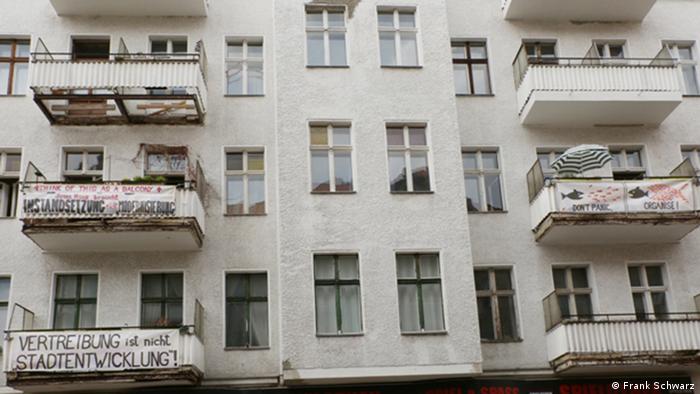 Both politicians and local residents in fashionable areas like Kreuzberg fear that allowing property developers to make such refurbishments will force long-time residents from their homes, driving up prices so far that whole communities will disappear. This, say residents, is what is going to happen in Eisenbahnstrasse. "If the measures are implemented, it will lead to an almost complete change of population," Gysi wrote in his letter to the mayor.

"The current legal situation is practically an invitation to landlords to implement unnecessary renovation work so that they can raise rents and - put it this way - get other clientele in the buildings," said Lay.

Berlin has various rules to protect tenants: apart from the rent cap, there is also the Milieuschutz ("social environment protection"), which is supposed to stop developers forcing up rents in this way. But there are loopholes - flats can still be sold off individually - that allow investors to treat such regulations merely as another level of bureaucracy.

Brückner had little sympathy for the Milieuschutz. "It's an additional brake on investment," he said. "I know some people see it as displacement, but that's the situation in the city - no one has a permanent claim to keep living in a place where they happen to be living."

"This is immoral," countered Schumm. "It's not like they're evicting a bunch of squatters; they're evicting people who have been paying rent and who have made these places their homes for years. There's an 80-year-old woman who has lived here for 50 years. I worry Berlin will become like London, where they're just standing property banks left empty."

The number of subsidized homes in Germany has sunk once again, as the state cuts housing subsidies. Critics say the trend needs to be reversed to prevent a widening gap between rich and poor. (27.07.2015)