The humanitarian ship carried out four rescues in one day — saving scores of people from one of the world's most dangerous crossings. Among those rescued were two pregnant women and a number of unaccompanied minors. 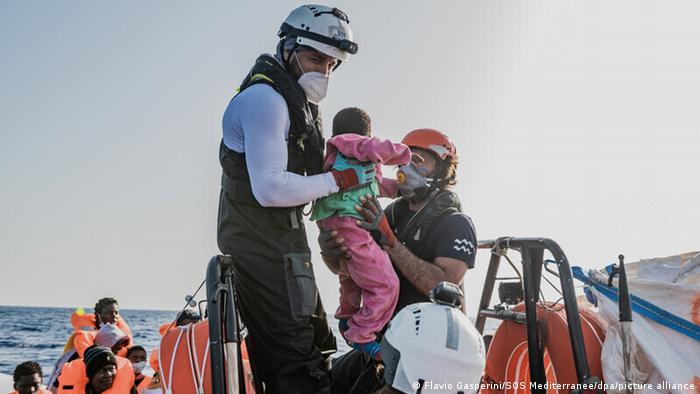 The Ocean Viking rescued a total of 196 migrants off the coast of Libya on Saturday, the humanitarian ship's operator said.

The ship was alerted to the migrants through German non-governmental organization Sea-Watch international's reconnaissance aircraft, Seabird.

A day of rescues

The crew on board the Ocean Viking first picked up 57 people in an inflatable dinghy in international waters off the North African country, maritime-humanitarian organization SOS Mediterranee said.

In the afternoon, the crew carried out two additional rescues in the same area, rescuing 54 people from a dinghy and 64 others from a wooden vessel.

They then saved a further 21 people from a wooden vessel.

Those rescued included at least two pregnant women and 33 minors — out of these, 22 of them were unaccompanied.

What does the Ocean Viking do?

The Ocean Viking is a former emergency response and rescue vessel run by SOS Mediterranee.

It carries out search-and-rescue operations for migrants making the dangerous crossing to Europe by boat across the Mediterranean Sea.

It does so, accusing European Union governments of neglecting such efforts in a bid to discourage migrants from attempting the crossing from war-torn Libya.

Libyan authorities have also been accused of forcibly returning intercepted ships to Libya, even when they are in European waters.

The Ocean Viking has been kitted out to search for migrants. On board, there is special accommodation for women and children, as well as a clinic.

Earlier in July, the vessel rescued 369 migrants off the coast of Libya from "a large wooden boat," including people from Egypt, Bangladesh, Eritrea.

Why are migrants crossing the Mediterranean Sea?

The Mediterranean route between the north African coast and Italy is one of the most dangerous in the world.

But many continue to make the sea crossing in a bid to escape conflicts as well as other factors such as poverty and food insecurity.

It is a perilous route: around 1,146 people have died at sea trying to reach Europe during the first half of 2021, according to the International Organization for Migration.

Many experts believe that there are far more deaths than those recorded.