President Barack Obama’s administration has pressed its case to institutionalize gay marriage, formally asking the US Supreme Court to abolish a 1996 law that defines marriage as only a union between a man and a woman. 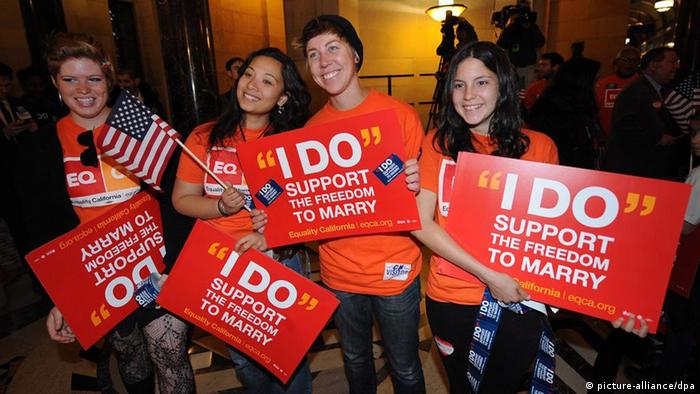 The Supreme Court is to hear pro and contra arguments on March 27 on Obama's gay marriage proposal, submitted on Friday. Rival Republicans in Congress also filed their case, urging the court to retain the Defense of Marriage Act (DOMA.).

The test case, backed by Obama, centers on a lesbian whose same-sex marriage in Canada in 2007 was not recognized by US authorities as grounds for inheritance when her partner died. She was left facing a $360,000 (273,000 euro) requirement to pay estate taxes.

The legal brief filed by US Solicitor General Donald Verrilli argues that the Defense of Marriage Act "violates the fundamental constitutional guarantee of equal protection".

Verrilli said DOMA denied "an array of important federal benefits" to tens of thousands of same-sex couples, which were otherwise available to heterosexual couples.

It was time for the court to take a "careful look" at laws that discriminated against gays and lesbians, Verrilli said.

Gay rights and marriage in Europe

Gay couples are still struggling for equal rights. Several European countries have either legalized or have plans to legalize same-sex marriage. DW takes a look at the situation across the continent. (13.02.2013)

German and European top courts have extended gay adoption laws in Germany, a further step toward equality for homosexual couples. From now on, life partners will have more rights when it comes to adoption. (20.02.2013)

Republican defenders of DOMA said it was inconsistent for the US Justice Department to question the 1996 law.

"The time to speak was in 1996, when Congress gave careful consideration to the need for DOMA," they said.

Obama has on various occasions proposed the right to gay marriage and drawn parallels to the 20th century's major civil rights campaigns, especially by peoples of color.

In 2011, Obama abolished the Pentagon's previous policy requiring about 17,000 homosexual couples in the military to hide their sexual preferences.

In March, the Supreme Court is also due to weigh the constitutionality of California's Proposition 8, a law which bans gay marriage in that state.