The heads of state of the US and Jordan have met in California to discuss Middle East concerns. Jordan is currently housing more than 600,000 refugees from neighboring Syria. 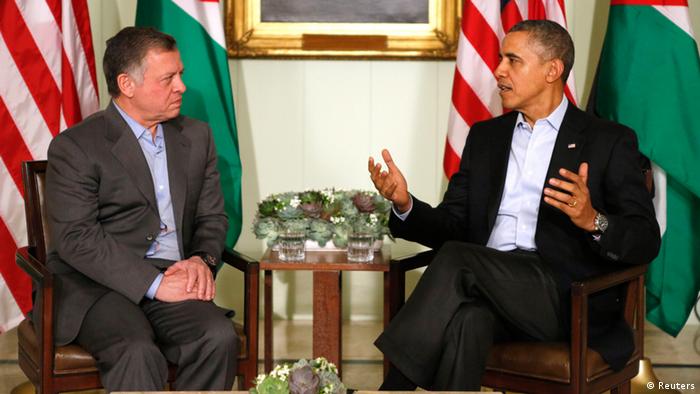 At the outset of talks between President Barack Obama and Jordan's King Abdullah on Friday evening in California, Obama said he would propose a new round of financial aid for Jordan including $1 billion (730 million euros) in loan guarantees and renewal of a five-year aid agreement for Jordan. The current $660 million-a-year program ends at the end of September.

Abdullah expressed his deep gratitude for US efforts to help his country and to end the war in Syria.

The civil war in Syria was top of the agenda for the meeting in Sunnylands, the estate of the late philanthropist Walter Annenberg, in the desert region of California.

Obama conceded he did not expect the conflict to be resolved any time soon but commented: "There will be some intermediate steps that we can take applying more pressure to the Assad regime and we are going to be continuing to work with all the parties concerned to try to move forward on a diplomatic solution."

The US president did not elaborate on what those steps might be, but during his visit to China this week, Secretary of State John Kerry said that a set of new options were under discussion.

But in talks with Jordan's leader King Abdullah, the focus was on helping the victims of the war: "There are going to be some immediate steps that we have to take to help the humanitarian assistance there," Obama said.

The US Agency for International Development has estimated that it will cost Jordan's government about $900 million to host the refugees this year.

The country's economy has also been weakened as a result of regional conflict, including the loss of supply of natural gas from Egypt.

Obama said he would ask Congress to approve the $1 billion in loan guarantees for Jordan to help make it easier for the country to borrow money. The new guarantee would be on top of a $1.25 billion loan guarantee Congress approved last year, the first one ever for Jordan.

Officials said the venue in California was chosen so the leaders could have a more relaxed atmosphere for their talks. They last met at the White House in April 2013.