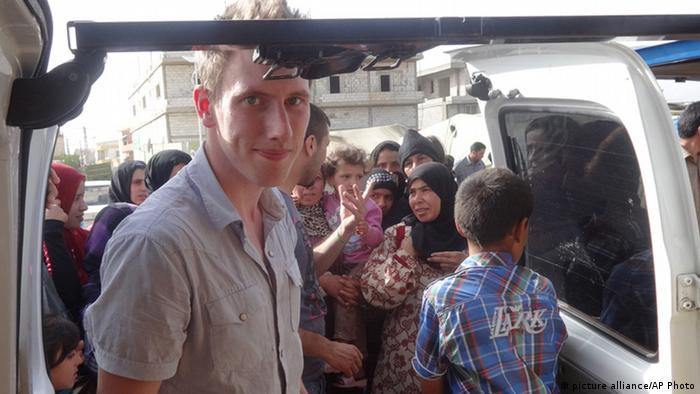 In a statement released while the US president was on board Air Force One, flying back to the United States following his Asian tour and the G20 summit in Brisbane, Australia on Sunday, Barack Obama described the actions of the self-styled "Islamic State" (IS) as "pure evil."

"Abdul-Rahman was taken from us in an act of pure evil by a terrorist group that the world rightly associates with inhumanity," the president said.

"Today we offer our prayers and condolences to the parents and family of Abdul-Rahman Kassig, also known to us as Peter," he added, while praising him for his humanitarian work.

Plea to the media

Earlier on Sunday, Kassig's parents Ed and Paula Kassig released a statement following reports that their son had become the latest foreign hostage to be murdered by IS militants.

In it, they urged the media not to publish or broadcast images released by IS, saying this would be "playing into the hostage-takers' hands."

"We prefer our son is written about and remembered for his important work and the love he shared with friends and family, not in the manner the hostage-takers would use to manipulate Americans and further their cause,"they said.

The 26-year-old Kassig had been delivering aid supplies in eastern Syria when he was taken hostage just over a year ago. He subsequently converted to Islam and adopted the first name Abdul-Rahman.

Kassig had previously been a US soldier, serving for four months in Iraq in 2007, before being granted a medical discharge later that year.

The same video which claimed the death of Kassig also showed the simultaneous beheadings of at least 18 men, who were described as officers and pilots with the Syrian government's armed forces.

IS militants have seized large swathes of territory in Syria and northwestern Iraq over the past several months, where they have proclaimed a caliphate in which they rule according to their interpretation of Sharia law.

Since August, the United States and a number of its allies have been conducting airstrikes against IS fighters in both Iraq and Syria.

United States intelligence agencies are working to confirm whether a video released by 'Islamic State' militants claiming the beheading of aid worker Abdul-Rahman Kassig is authentic. The video has been widely condemned. (16.11.2014)

US authorities working to verify purported 'IS' Kassig beheading video

A video purporting to show the killing of American hostage Abdul-Rahman Kassig has been released by the 'Islamic State' militant group. The video also claims to show the mass beheading of Syrian soldiers. (16.11.2014)

US hostage Kassig beheaded, says IS

The self-proclaimed Islamic State has released a video purporting to show the beheading of an American hostage, Abdul-Rahman Kassig. The video also shows what appears to be a mass beheading of captured Syrian soldiers. (16.11.2014)