Obama accepts Nobel Peace Prize as ″call to action″ | World| Breaking news and perspectives from around the globe | DW | 09.10.2009

US President Barack Obama said on Friday he was "surprised and humbled" at winning the 2009 Nobel Peace Prize and said he accepted the award as a call to action for nations to confront the challenges of the 21st century. 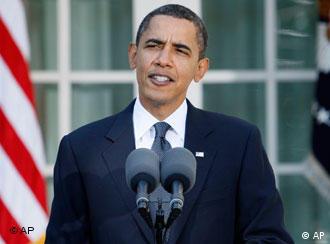 Speaking outside the White House in Washington, Obama said he does not view the prize as "a recognition of my own accomplishments," but rather as a recognition of goals he has set for the United States and the world.

"I do not feel that I deserve to be in the company of so many transformative figures that have been honored by this prize," the president said.

Earlier, Norwegian Nobel Committee head Thorbjoern Jagland's announcement that the prize would be given to Barack Obama just nine months into his presidency was met with audible gasps from the audience at the Norwegian Nobel Institute in Oslo.

Obama, the first African-American to serve as US president, presided over a historic United Nations Security Council meeting, which unanimously approved a US-drafted resolution calling for nations to scrap their nuclear arsenals. He also has worked, unsuccessfully, to bring new life into the stalled peace process in the Middle East.

The prize comes with a monetary award of 10 million Swedish crowns ($1.4 million). It also comes with higher expectations for Obama.

Obama has been widely credited with improving America's global image after the eight-year presidency of George W. Bush.

But his winning of the award has triggered strong reaction around the world. While world leaders were largely supportive of the award, others have questioned what Obama has accomplished so far in his first term to deserve the award.

"His [Obama] advocacy for a nuclear-free world is a goal that we should all set for ourselves," Merkel said. "In a short amount of time, he has set a new tone for the rest of the world, bringing a willingness to negotiate."

Mohamed ElBaradei, the head of the UN's nuclear watchdog, the IAEA, said he could not think of anyone more deserving of the award.

"In less than a year in office, he has transformed the way we look at ourselves and the world we live in and rekindled hope for a world at peace with itself," ElBaradei said.

But Larry Sabato, a political science expert at the University of Virginia, told news agency Reuters it was odd for Obama to win the award because of his thin record.

"It adds to his prestige and gives him some additional clout internationally and maybe even in pushing healthcare reform," he said. "But it also strikes most people as ridiculously premature."

A record 205 nominations were received for the peace prize this year, and as is traditional, were kept a secret until the official announcement. But that didn't stop some from making predictions.

The last Americans to win the prize were former vice president Al Gore, who shared it with the Intergovernmental Panel on Climate Change in 2007, and former president Jimmy Carter in 2002, recognized for his work as an international mediator.

Nobel Prize for Chemistry goes to breakthrough in antibiotics research

The Nobel Prize for Chemistry has been awarded to two scientists from the US and one from Israel for their work on ribosomes, a breakthrough in research into new antibiotics. (07.10.2009)