Nobel Prize for Chemistry goes to breakthrough in antibiotics research

The Nobel Prize for Chemistry has been awarded to two scientists from the US and one from Israel for their work on ribosomes, a breakthrough in research into new antibiotics. 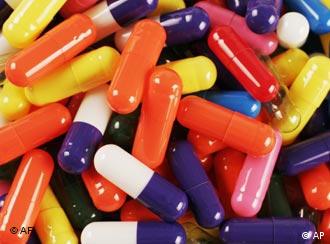 The trio contributed to the development of new antibiotics

US scientists Venkatraman Ramakrishnan and Thomas Steitz and Israeli scientist Ada Yonath have been awarded this year's Nobel Prize for Chemistry. The Nobel jury said they were honored for their studies on how ribosomes function, a breakthrough that has been vital in the development of new antibiotics.

The Nobel committee cited the work of the trio as "directly assisting the saving of lives and decreasing humanity's suffering."

"Many of today's antibiotics cure various diseases by blocking the function of bacterial ribosomes. Without functional ribosomes, bacteria cannot survive. This is why ribosomes are such an important target for new antibiotics."

The three scientists have generated three-dimensional models to illustrating the ribosomes' individual atomic structure. These models are now used in the quest for new antibiotics. About half the current antibiotics in use block the function of bacterial ribosomes, but there is a growing problem of bacterial strains that are resistant to drugs, the committee said on Wednesday.

Ramakrishnan works at the MRC Laboratory of Molecular Biology at Cambridge University. Yonath, who works at the department of structural biology at the Weizmann Institute of Science in Israel, said she did not expect the prize about a discovery made almost a decade ago.

The Nobel Prizes are handed out annually for achievements in science, literature, economics and peace. The prize in chemistry was this year's third, following awards for medicine on Monday and physics on Tuesday.

Three US researchers have won this year's Nobel Prize for medicine, for work focusing on chromosome reproduction and how cells age. (05.10.2009)