Nuclear waste in disused German mine leaves a bitter legacy | Germany | News and in-depth reporting from Berlin and beyond | DW | 08.02.2019

Nuclear waste in disused German mine leaves a bitter legacy

Germany's environment minister recently visited the Asse mine, where 126,000 barrels of radioactive material are stored. Frustrated locals want the waste disposed of elsewhere — a project that will span decades. 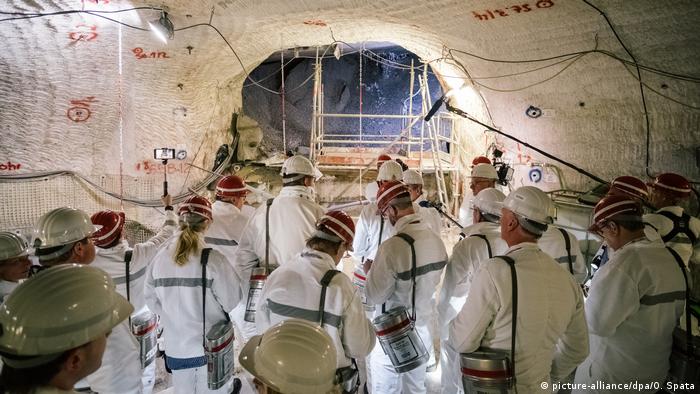 Manfred Kramer is not exactly happy about Environment Minister Svenja Schulze's visit to the Asse mine in the northern state of Lower Saxony. The 67-year-old is a member of Schulze's party, the Social Democrats (SPD).

The reason for his frustration? Kramer does not live not far from the former Asse salt mine that has long been used as a deep storage facility for nuclear waste. And here he is now, too, in front of the factory gate.

For years Kramer has been speaking out against the continuing storage of low to medium-level radioactive waste in the old mine. It was deposited more or less carelessly in the old mine in the 1960s and 1970s. Waste from nuclear reactors make up the largest part, but it also contains waste from hospitals and research institutes.

It is not clear whether some of the waste there is highly radiocative. There's no evidence to that effect, but plenty of rumors.

"It's nice that she's finally coming," Kramer quips to the journalists who have accompanied the environment minister on her trip. "Soon she'll have been in office for a year. It sure took a while!"

Until now, no environment minister has been able to score points with locals on the issue of the "Asse"— how the mine is commonly referred to in the area.

The local sentiment of resentment towards politicians speaks to the fact that for years the Asse has become a symbol of neglect, shown by state, business, and research sectors in terms of the legacy from nuclear energy.

In 1965, the extraction of potash salt in the Asse stopped. After it was shut down, the nuclear waste was officially put there for "research purposes" until the end of the 1970s. But in reality, the mine was a repository.

And the facility has been dilapidated for a long time now; water flows into the tunnels, some 13,000 liters — every day. "Three generations operated nuclear power in Germany, and now 30 generations or even more will have to suffer the consequences," Schulze complains. "This is proof of how irresponsible nuclear energy was," she adds.

Read more: Germany can push renewables without blackouts - Friends of the Earth

In 2010, it was decided that the barrels must be retrieved from the mine — and nobody wants to risk the complete collapse of the shafts which means the waste could come into contact with groundwater. It is a billion-dollar project. However, many experts doubt whether retrieving the barrels from the old shafts can be carried out successfully at all.

A new mine needed to clear out the old one

Germany's federal company for radioactive waste disposal (BGE), was founded in 2016 and is responsible for the mine and the waste retrieval. One of their experts is the mining engineer Thomas Lautsch.

Lautsch takes the environment minister through the mine, 490 meters (around 536 yards) below the surface. Listening to the engineer talk, one begins to grasp just how complicated the retrieval could get — and how expensive: "We would have to build a retrieval mine, which is more than simply just a new shaft. We would also need an interim storage facility for the waste, and we would have to create many new shafts to gain access to the individual chambers."

Lautsch adds that the construction phase for this will easily take eight or nine years. "By about 2024, we have to start construction". The old shafts and the horizontal paths in the mountain do not meet the current legal standards on nuclear material.

This means that a completely new mine will have to be built around the old mine, simply to retrieve the barrels. If everything went according to plan, the retrieval could begin in 2033.

Schulze concedes that this timeline is much too long. But she emphasizes that planned retrieval of the barrels of waste from the ailing facility must be a combination of both safety and speed. "Safety must be the absolute priority," she stresses. In other words, this could still take a very, very long time.

"The barrels must be finally and safely disposed of somewhere else in the country," demands Kramer, "should they actually able to be retrieved by 2050." The local SPD party member argues that the residents of the region have already experienced enough fear and unease due to waste being stored at the aging site.

It will be over the course of the next few years that will show whether or not a safe and successful extraction is possible. All those involved are still hoping for the best.

More than 400 barrels of low-level nuclear waste reportedly have to be examined and possibly repacked at a storage facility in Lower Saxony. The contents are predominantly from X-ray and cancer therapy waste. (16.04.2018)

The closure of the nuclear power plant just across the border from Freiburg is no longer conditional on the startup of a new reactor on the Normandy coast. The opening of EDF's Flamanville 3 plant has been delayed. (05.10.2018)