Highly radioactive waste from a nuclear plant has been transported for the first time on a river in Germany. Protesters managed to temporarily halt the ship after they rappelled down from a bridge over the Neckar River. 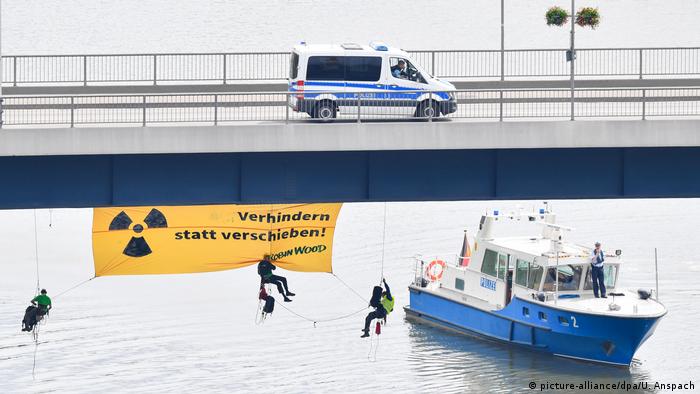 Protesters hanging from ropes on a bridge over a river in southern Germany managed to temporarily stop a ship carrying nuclear waste on Wednesday, police in the state of Baden-Württemberg said.

A special ship carrying three containers filled with highly radioactive waste from a closed nuclear power plant set sail on the Neckar River early on Wednesday morning. It was the first time that nuclear waste has been transported on a river in Germany.

Four activists from the environmental organization Robin Wood rappelled down from a bridge over the Neckar near the town of Bad Wimpfen carrying a banner reading "prevention instead of relocation."

The controversial ship was able to complete its journey after specially trained officers removed two of the protesters.

Images posted on Twitter by anti-nuclear activist groups and Robin Wood showed several police boats in the water near the bridge.

The ship set off from energy provider EnBW's closed nuclear power plant in Obringheim and was en route to an interim storage facility in Neckarwestheim. The 50-kilometer (31-mile) journey was expected to take around 12 hours but ended up lasting 13 due to protest-related delays.

Anti-nuclear power protesters lined the banks of the river. They called transporting nuclear waste on rivers unsafe and criticized how officials are carrying out radiation tests along the river.

Jochen Stay, from the activist Anti-Atom Organization, called the transportation of nuclear waste by river "an act of irresponsibility beyond compare."

The state of Baden-Württemberg's Environment Ministry responded on Twitter that radiation measurements that have been taken thus far along ship's route show the waste is being "perfectly transported" along the river and that "the same applies to the ship itself."

Similar protests have been held in Germany when trains carrying nuclear waste cross the country.

EnBW maintains that transporting atomic waste using the Neckar River is a safe solution and plans to carry out another five boat trips with nuclear waste in the next few weeks.

The German government recently signed a deal with utility companies that will see Berlin take over responsibility for the temporary and final storage of nuclear waste while energy providers will pay around 24 billion euros ($27.3 billion) for its disposal.

Greens party lawmaker Sylvia Kotting-Uhl told DW in an interview that the government is pleased with the agreed sum, calling it "a lot of money."

However, she said it's not certain whether the money will be enough to cover the costs.

The German government plans to close all of the country's nuclear reactors by 2022, but the debate about where the radioactive waste will end up remains contentious.