After a Turkish newspaper opposed the first allocation process of press seats at the NSU trial in Munich, the seats were redistributed. Some critics called the new system a "raffle" - one that may be unconstitutional. 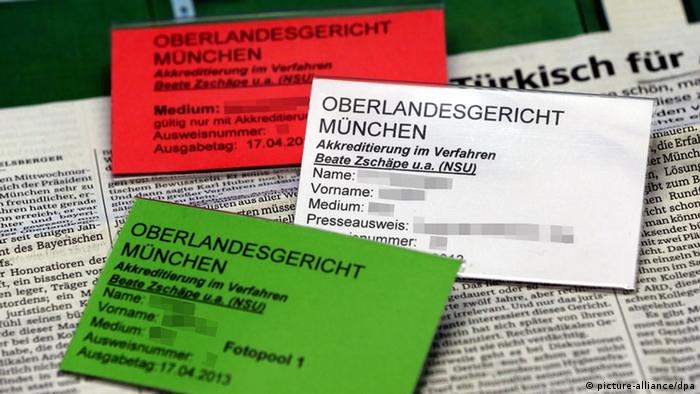 The deputy editor-in-chief of the Turkish newspaper, "Sabah," Ismail Erel, is both happy and relieved. His paper can now report first-hand on the trial of the right-wing extremist terror group National Socialist Underground (NSU), which begins on May 6 at Bavaria's highest court in Munich.

"Of course we're happy about that - that we got one of the accredited media seats through the luck of the draw," Erel told the German Press Agency (dpa) after seats were distributed on Monday (29.03.13).

The presence of "Sabah" at the NSU trial is a twist of fate that strikes many as being just. From the start, the newspaper had the courage to challenge the constitutionality of the Bavarian state court's controversial media accreditation process. Initially, the Munich court had awarded the 50 seats on a "first-come, first-served" basis. No Turkish media were quick enough to obtain one of the seats, and the same was true for nearly all foreign media.

At Germany's Federal Constitutional Court in the city of Karlsruhe, judges ultimately ruled against the Munich court's accreditation process and in favor of the plaintiffs. A number of seats were allotted for foreign - and particularly Turkish - members of the press. Of the ten victims allegedly murdered by the NSU, eight had Turkish roots and another, Greek.

Luck of the draw

For its second round of the media accreditation process, then, the Munich court decided on a rather complicated lottery system. Seats were apportioned into categories including print media, radio, television and news agencies. To see just how lucky "Sabah" and the other selected media are, one only has to look at the numbers. For the sub-group "Media published in Turkish," four seats were reserved. Thirty-six applications were received. No wonder, then, that even before the official drawing, which was performed by a notary official, the word "raffle" was making the rounds to describe the procedure. 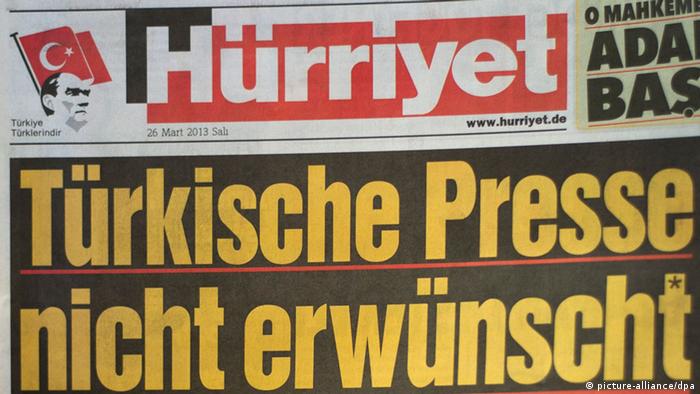 The headline, "Turkish Press not wanted," was one of many expressing disappointment after the first accreditation

In spite of his own delight at having been chosen, "Sabah" journalist Erel sympathizes with those who now find themselves on the other side of the fence.

"I can understand the disappointment of the media that were chosen the first time round and now aren't in there," Erel told dpa. The German press agency itself was lucky twice over: first, in that it obtained a seat for German-language media, and second, in that it also obtained one for English media. The news agency publishes content in both languages.

Among those who lost out in the second accreditation process - having previously obtained seats in the first - were many of Germany's household names. Well-known media like "Zeit," "Stern," "Tagesspiegel" and "Frankfurter Allgemeine Zeitung" will not be given seats at the trial.

"…and the Lord taketh"

One lost seat belonged to freelance journalist Martin Lejeune. Shortly after losing out in the second round, the Berlin native sent a letter via his lawyer, challenging the constitutionality of the "lottery" system. Over the course of approximately 20 pages, the journalist describes why he believes he has been unfairly deprived of a seat. The highest judge at the Munich court, Lejeune claims, has overlooked the fact that "a seat that was previously and successfully awarded to a journalist cannot simply be taken away again."

Prior to the first accreditation process, the courtroom's media chamber had already been criticized as too small given the worldwide media attention being paid to the trial. The Munich court then rejected a proposal which would have seen a second room be made available, including a live video feed of the proceedings. Doing so, the court signaled, would violate constitutional law.

As a result, a potential legal challenge that was considered by Editor-in-Chief Ines Pohl at the "Tageszeitung" newspaper, which in the first accreditation process received the first spot due to its quick application turnaround, had little chance of success. The second time around, "Tageszeitung" finds itself among the more than 300 media that applied for - but failed to receive - accreditation. 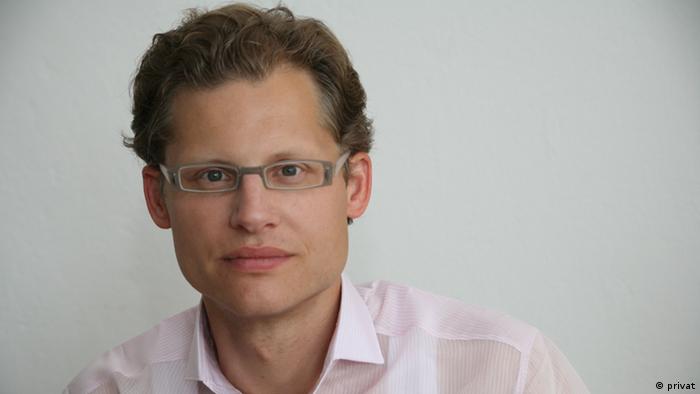 First in, then out: Martin Lejeune is challenging the legality of the Munich court's lottery system

Lejeune's lawyer, who is following through with a challenge in court, bases his argument on Article 5 of Germany's constitution, the Basic Law for the Federal Republic of Germany. Article 5, he claims, guarantees "a right to information" to the press - a principle that could be violated by the small size of the Munich courtroom. In his legal petition, the lawyer writes that Munich's top judge cannot simply operate by the principle of "The Lord giveth and the Lord taketh away."

In an interview with DW, Lejeune also stressed what he views as a material disadvantage. A seat at the trial would have allowed the freelancer to report on the entire legal proceedings of the case, whose trial is expected to last well into 2014. After the successful first accreditation process, Lejeune had established contact with other media that lacked representation at the trial, including Deutsche Welle. Like many other news sources, Deutsche Welle did not receive accreditation but was instead placed on a long waiting list to obtain access to the courtroom.

In the second-round lottery, Deutsche Welle, together with Germany's other publicly-funded news sources, submitted a joint application to increase the chance of obtaining a "shared" seat at the trial. Unlike the first accreditation process, this time media working in conjunction with one another was expressly allowed. Each accredited journalist could "at any time, in agreement with a medium that received a seat, take over that reserved seat," according to the written statement by the Munich court.

A Munich court will reallocate press passes for the neo-Nazi NSU terror cell trial accused of killing 10 people, eight with Turkish heritage. Turkish media had previously not received any seats in the courtroom. (19.04.2013)

Victims' relatives regard the delay in the National Socialist Union neo-Nazi trial as a "slap in the face," says Sebastian Scharmer. Deutsche Welle spoke to the lawyer of Gamze Kubasik, whose father was shot in 2006. (16.04.2013)

For many media, that's an acceptable compromise. For freelancer Martin Lejeune, it isn't.

"This arrangement provides, in an irresponsible way, for the encouragement of unrestricted commercialization," he criticized in his constitutional challenge. In other words, while seats are not for sale, interested and financially powerful media that did not receive a seat at the NSU trial could see very good reasons to find a way to buy access into the trial with the help of a "third-party" middleman.

Lejeune's fears are well grounded. In the first round of accreditation, it would have been impossible for a journalist to "give" his or her seat to another person. Many media representatives, out of solidarity for their Turkish colleagues, had wanted to do just that. The German "Abendzeitung" newspaper, for example, would have happily given its seat to "Sabah." But the Munich court, on legal grounds, was unmoved by that proposition.

With the current arrangement, the system is turned around. "Sabah" got lucky, while the "Abendzeitung" did not.

As a result, the Turkish gazette has decided to cooperate with the German newspaper throughout the NSU trial.

"We owe that to our colleagues," said Deputy Editor-in-Chief Ismail Erel.