Talks with the US over the transatlantic free trade agreement are set to continue. Phone-hacking "victim" Angela Merkel is in favor, but European Parliament President Martin Schulz suggests she reconsider. 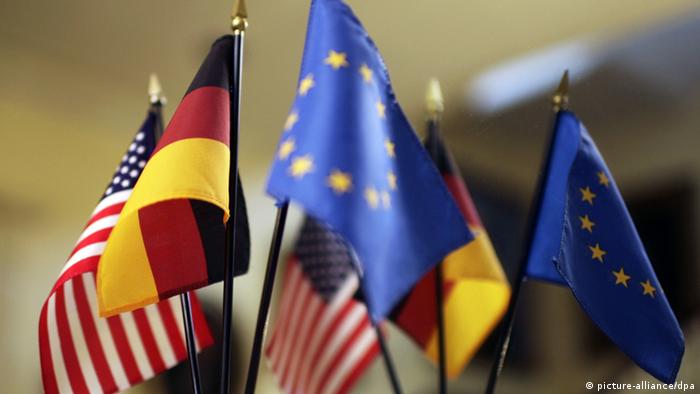 For the European Union, the US intelligence agency's alleged spying activities on the one hand and business on the other are clearly two different things. Certainly for Germany, free trade is more important than outrage over the scandal, as a spokesman for Chancellor Angela Merkel said on Monday (28.10.2013) in Berlin.

He was repeating what Merkel made clear at a summit of EU leaders in Brussels last week: that negotiations with the US on a free trade agreement would go ahead despite the NSA affair. Her view was shared by all 28 heads of state and government, according to the summit statement.

"Personally I'm of the opinion that whoever leaves must also know how they are going to get back in. Maybe the talks are more important right now considering the current situation," Merkel remarked on Friday during the EU summit.

But the anger in Germany is real: there are calls to freeze talks with the US from within the ranks of Merkel's conservative Christian Democrats and their possible future coalition partners in the Social Democrats.

Don't shoot yourself in the foot 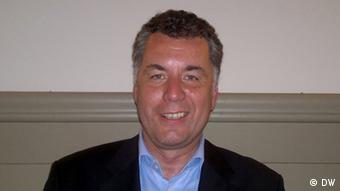 The talks with the US are about an extensive customs and trade agreement, which, if agreed to, should boost the economy on both sides of the Atlantic. It should reduce trade barriers and create uniform standards. The EU Commission and the European Parliament have declared the FTA one of its key projects, with the aim of establishing what will be the world's biggest free trade zone by the end of 2014.

Christian Ehler heads the European-American parliamentary group in the European Parliament. He told Deutsche Welle, "I don't think we should suspend the free trade talks. We'd be shooting ourselves in the foot. There are billions of business opportunities at stake on both sides of the Atlantic. Why should we burden ourselves with a discussion that is not directly related?" The FTA, which has been sought after for years, should not be held "hostage." 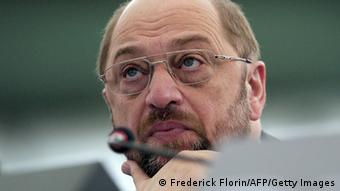 Schulz is worried that the US may spy on EU negotiators

Meanwhile, the president of the European Parliament, Martin Schulz, has suggested suspending the negotiations. Schulz heads the Social Democrat team dealing with European issues in the current coalition negotiations in Berlin. In principle he is in favor of a FTA, but in light of the spying scandal would like to take a break from negotiations. "If such events continue, and more news comes out, I fear that those who are against the free trade agreement in principle will become the majority," said Schulz during last week's EU summit. "My advice is to stop for a moment and discuss how we can avoid such a development. This is in the interests of the United States, and our interests."

At the least, says Schulz, one would have to be sure that the Americans were not spying on the people in the EU Commission and in the EU delegation in Washington with whom they wanted to negotiate.

Ehler finds such mistrast exaggerated: "Is that really relevant to these talks? These are just negotiations. Both sides know each other's position and have to come to some agreement. I'm not so worried that we'll be at a disadvantage."

A part of the FTA is to include agreements on data protection in conventional and internet commerce. According to its negotiating mandate, the EU has far greater plans than the US, and Ehler says the EU can only push them through if negotiations continue: "When it comes to the issue of data exchange in the digital economy, then we have to think carefully whether we can create a free space for the economic exchange of data without conditions. Of course we know that customer data that goes to American companies is used to develop profiles and use secret service methods to snoop on people."

So the question has to be asked how Europe will deal with companies like Google, Facebook and Amazon in future, when they pass customer data to US intelligence agencies, as required by US law. The EU is currently negotiating data protection regulations among the 28 member states. They are supposed to be completed in the coming year, but they are still controversial. Germany wants to see relatively high standards of consumer protection, while Great Britain and Ireland want to limit the restrictions on business. 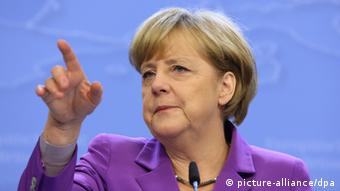 German Chancellor Merkel has said she may reconsider the SWIFT agrement

In response to the NSA allegations, the European Parliament called for the suspension of the SWIFT agreement with the United States. The SWIFT agreement regulates the exchange of data over accounts and international transitions in a bid to track down terror suspects. While EU Commissioner Cecilia Malmström rejects the idea of suspending the agreement, Merkel intends to at least give it some thought.

"As far as SWIFT is concerned, I need to look at it more closely," said Merkel. We have to weigh up very precisely what we lose in security for our citizens. I have a certain understanding for the vote in the European Parliament."

Martin Schulz would like to see the SWIFT agreement put on hold to send a clear message to the US that something must be done in order to rebuild trust. The American negotiators need to put themselves in the shoes of the Europeans, the EU parliament president said during the summit: "I was asked if I could be sure that the German secret service is not listening to Barack Obama, no, I cannot be sure. But if that were the case, I would be interested in the White House's reaction." But he was sure: if the US found itself in the same position as the Europeans right now, they would not carry on with the FTA talks.

Still no date for next round of talks 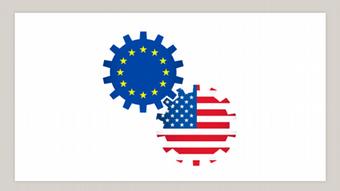 The next round of talks was scheduled to take place at the beginning of October, but US Trade Representative Michael Froman had to postpone them because of the US budget crisis. Now the US government is back up and running, Froman said negotiations will resume as soon as possible, probably in November in Brussels.

Regardless of the trade talks, Germany and France want to reach an agreement on the rights of the intelligence services by the end of the year. That will not be mandated by the European Union, but will be a bilateral agreement: however angry the EU leaders were at the summit, the European Union is not in fact responsible for intelligence affairs.

Opinion: 'My friend, the digital occupier'

The US are spying big time. It's particularly startling that they also listen in on friends and allies. DW's Volker Wagner says Germany should take a stand against digital occupation by the US. (28.10.2013)