NPD sends offensive letter to candidates with Turkish background | News and current affairs from Germany and around the world | DW | 22.09.2009

The far-right NPD has sent letters to the private addresses of parliamentary candidates of immigrant heritage, telling them to go home. Prosecutors are exploring possible legal action. 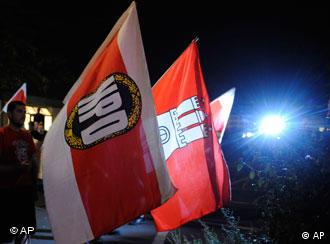 The NPD is behind the fake repatriation orders

In the two-page letter, which is phrased as an official announcement, the Berlin branch of the National Democratic Party, or NPD, called on various politicians to leave Germany. It presents a five-stage plan setting out "the details of [their] return home". 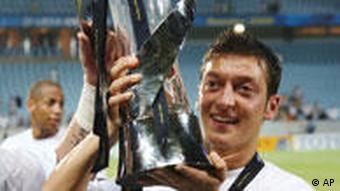 Soccer star Mesut Özil was targeted by the NPD

In an obvious re-hashing of Nazi Germany's anti-Jewish laws of the 1930s, the plan details how people of immigrant background would be phased out of German life. According to news magazine Focus, the steps include withdrawing the right to social welfare and the right to own real estate on German soil. In the meantime, the letter suggests, immigrants should "already start" looking for work and shelter in their "native" countries.

The letter is signed by the "commissioner for the repatriation of foreigners." But it also makes clear that it is written by Joerg Haehnel, chairman of the Berlin NPD. State prosecutors are now exploring the possibility of prosecuting Haehnel for incitement.

Green party politician Özcan Mutlu, who regularly receives far-right hate-mail both by e-mail and post, was unimpressed by the offensive letter: "They still don't understand that this country is our country too. The only immigrants who might be shocked by this letter are those that don't recognize it for what it is: a cheap campaign trick."

Spokesman for the Berlin senate, Richard Meng, called the letter obscene and digusting. "I can only advise them to throw it in the bin," he said. 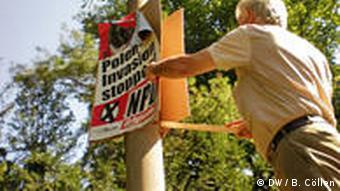 Haehnel was last in trouble with state prosecutors in 2007 and 2008, when he was fined for anti-immigration comments and for declaring his approval of the murder of communist leaders Rosa Luxemburg and Karl Liebknecht in 1919.

NPD campaign posters warning of a "Poland invasion" in the eastern state of Mecklenburg-Western Pomerania were removed overnight after a storm of protests.

Germany's far-right NPD party is in hot water again over racist remarks made about a football player of Turkish descent. Earlier this year, three NDP members were given suspended sentences for a similar offense. (17.09.2009)

Romanian-born writer Vlad Georgescu has filed charges of sedition and defamation against the premier of the German state of North Rhine-Westphalia. He told Deutsche Welle why he did it and what he hopes will come of it. (08.09.2009)