Germany's far-right NPD party is in hot water again over racist remarks made about a football player of Turkish descent. Earlier this year, three NDP members were given suspended sentences for a similar offense. 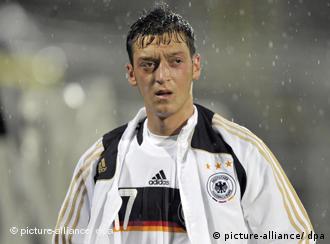 The far-right politician said the 20-year-old midfielder wasn't a real German but only had German nationality on paper.

"We are proud that Mesut Özil is a German national player," DFB president Theo Zwanziger is quoted by the newspaper Der Tagespiegel as saying. "This is the kind of Germany that the DFB wishes for: a free, tolerant and independent country, in which there is no place for nationalist thinking and racism, such as the NPD idiots try to spread."

Zwanziger added that he would speak to Mesut Özil, who was born in Germany to Turkish parents, and his club, Werder Bremen, about what kind of legal action they might take against Beier.

This is not the first time racially-motivated insults have been hurled at footballers by the NPD.

In April, Beier was given a seven-months suspended sentence for inciting racial hatred against Patrick Owomoyela, born to a Nigerian father and a German mother. Two other high-ranking NPD officials also received suspended sentences for the same offense.

NPD to be banned?

The German government hasn’t decided on whether to attempt once more banning the far-right National Democratic Party - but NPD figureheads in Saxony have been increasing the number of sympathisers. (19.06.2008)