An Elvis Presley impersonator shook up the record books by singing songs from "The King" for more than 50 hours. "Kjell Elvis" was allowed to have a five-minute break every hour and sip on water and smoothies. 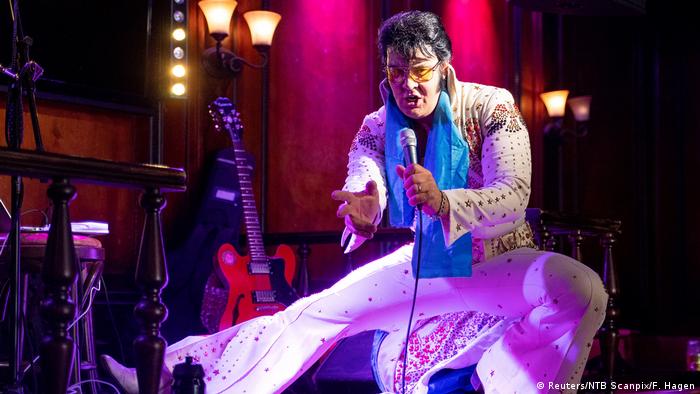 A Norwegian man on Saturday set the new world record for singing Elvis Presley songs for 50 hours, 50 minutes and 50 seconds straight in an online competition.

"I'll never do this again," said the 52-year-old after he  broke the record recognised by the Guinness World Record. His performance was streamed by Oslo tabloid VG, among others.

Bjornstad began singing on Thursday morning and switched between sitting and walking around on stage. When he completed the full Elvis catalogue he started singing all over again.

A nutritionist and a physician monitored Bjornstad, who was regularly served hot water with honey and lemon. The singer was told to take it easy on the coffee and instead rely on smoothies, fruit and energy bars to sustain his voice.

Bjornstad could take a five minute break every hour. He was also allowed to save up the breaks for a longer pause.

King of Rock and Roll

"His favourite was 'An American Trilogy' and I've heard 'Teddy Bear' quite a few times," Bjornstad's manager Helge Johansen told Norwegian news agency NTB, adding that the singer's voice, however, did sound increasingly hoarse during the final hours of the competition.

During one of his breaks, Bjornstad told VG that the legendary Elvis Presley — who died  in 1977 aged 41 — passed "far too early."

Also known as "The King," the American singer and actor is regarded as one of the most significant cultural icons of the 20th century.

Presley scored dozens of number one hits, won more gold albums than anybody else, and sold more than 146 million albums worldwide, according to the Recording Industry Association of America.

Donations made for this week's singing marathon will be used in part to fund a hospital for refugees in Myanmar.

The Guinness Book of Records has recognized a dentist from Offenbach for pulling a 37-millimeter tooth out of the mouth of a patient who had complained about severe pain.

An international team of artists succeeded in building a sandcastle that is almost a meter higher than the previous record holder. The triumph came two years after a similar attempt to break the record ended in tragedy.

Hausa hip-hop on the up and up

Without Africans in North America, the world would never have had Elvis Presley and the rock’n’roll revolution. Polish cultural historian Mariusz Krasniewski explores this theme and others in his book on Hausa hip-hop.