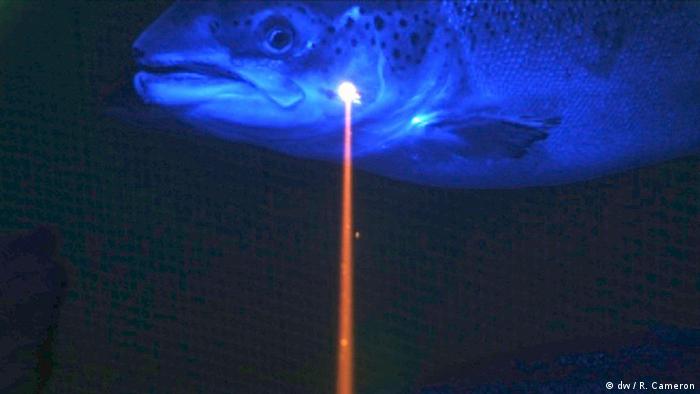 The sea louse is no larger than a house fly, but for years it has been the biggest headache for Norway's more than 1,200 fish farms. It feeds off the salmon's skin and blood, sometimes leading to open wounds.

The 5.1 billion euro export industry has so far failed to get a grip on the problem, which costs some 310 million euro in lost revenue every year. Chemicals in the water and medicine mixed in with the fish feed has had some success, but the parasite is becoming resistent to more and more of these treatments.

Hence the race for alternative methods to fight sea lice is on. On an industrial estate in the Norwegian capital Oslo, a team of engineers with the "Stingray" company believe they have a solution that sounds like it comes straight out of a science fiction movie: a laser gun. 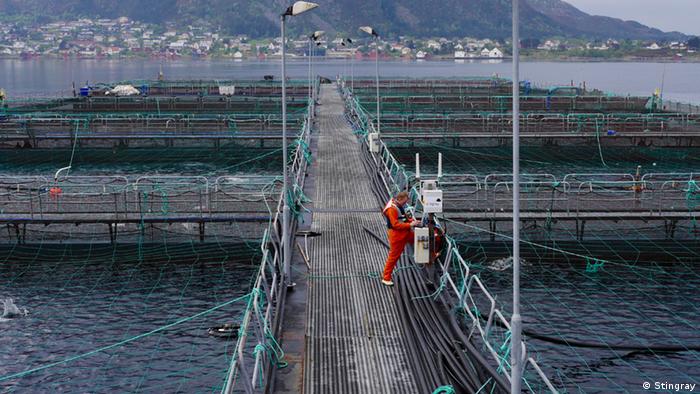 More than 1,200 fish farms in Norway offer up innumerable hosts for the sea lice

"The first time I heard about sea lice, I googled it to see what it looked like, and my first idea was to shoot it with a laser," explains Esben Beck, an entrepreneur with background in Norway's oil industry.

"I got laughed at a lot, because the initial thought of the majority of people I spoke to was that this couldn't be done," he says.

But Beck insists that shooting sea lice on a moving target - the salmon host - is not as difficult as it sounds.

"In the late 70s, early 80s, the Americans had developed a laser system to shoot down cruise missiles from a very long distance," Beck says. "If you have a cruise missile the length of one metre, and you shoot with a laser from several kilometres away, that's a much higher precision than we need to actually shoot the lice."

The laser is enclosed in a watertight pod the size and shape of a punching bag. The pod also holds a camera that identifies the parasite on the fish, before an onboard computer calculates the laser's "trajectory." This way, it should hit a bullseye every time. Another camera provides a live-feed of the action to the Oslo control room.

"As the fish swim by, the sea lice are detected on the fish, and in a matter of a few milliseconds the system aims the laser beam towards the sea lice and kills them," explains John Arne Breivik, Stingray's general manager.

"It gets fried. The laser fills it with a lot of energy, namely photons. The energy coagulates the sea lice so that it dies. And this happens in just a few milliseconds," he adds.

"We can actually document every single louse we have shot," he says, gesturing to a patchwork of photos of more than a hundred individual sea lice identified by the cameras, moments before they are killed by the laser.

"That means we even have a lock-on target like they have on fighter planes, so it's a pretty cool thing!"

The salmon itself is not harmed by the laser, because its shiny shells act as a mirror that reflects the light. So far the lasers have treated millions of fish, and fish farmers have reported no injuries. 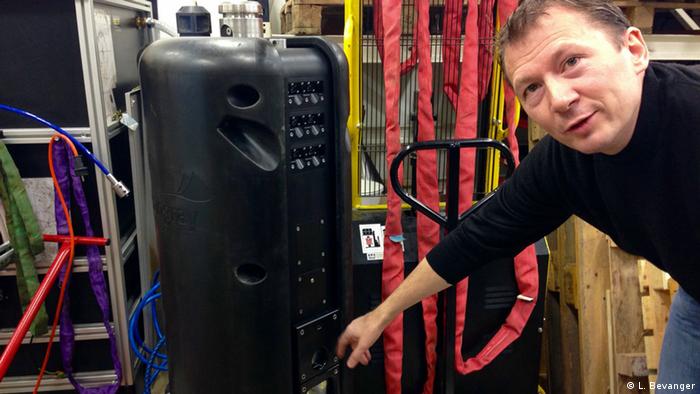 Breivik with one of Stingray's "pretty cool" laser pods

But concerns over fish farming and the prevalence of sea lice remain, especially among environmental organisations in Norway.

"We have a situation where we're producing 1.2 million tonnes of farmed salmon [annually], and that means there's a huge amount of hosts for the parasite," Karoline Andaur, conservation director at WWF Norway, says.

"Salmon farming in Norway uses an open net system, which means parasites can float freely between the wild environment and the cage that the farmed salmon is in."

The WWF official thinks it's "far-fetched" to believe that all sea lice can be shot down with lasers.

The people at Stingray remain optimistic, however.

"We believe that two to three years from now, continuous laser treatment inside the pen will be the base treatment," John Arne Breivik, Stingray's general manager, says.

The company is already preparing to fulfil orders of between 100 and 200 new laser guns to be delivered in 2016. Yet the scale of Norway's aquaculture industry means other treatment methods like chemicals and medicines will continue to play an important part for some time.

NASA is planning a manned mission to Mars, but first they must figure out how astronauts can grow their own food on the trip and on the red planet. Now a team of Norwegian scientists are closer to solving the problem. (13.01.2016)

The nordic country saw more registrations of zero emission cars than any other nation in the world last year. Norway beats neighbor Sweden - and environmentally-minded Germany - by a wide margin. (06.01.2016)