A submarine power cable is set to link Norwegian hydroelectric plants and German wind farms starting in 2020. A powerhouse for Europe, Norwegian hydropower plays an important role in the renewable energy revolution.

In Germany and Europe's march toward renewable energies, the 623 kilometers (387 miles) of submarine cable between northern Germany and Norway is a very important step forward. In the Norwegian town of Haugesund, the state-owned energy system operator Statnett and the European electricity transmission operator TenneT have now signed a contract for the construction of NordLink.

The high voltage cable has a capacity of 1,400 megawatts and is expected to adjust for electrical fluctuations in Germany with wind and solar power. If required, the highly efficient DC power cable, together with Norwegian hydropower, can cover around three percent of Germany's demand for electricity.

Progress toward a renewable energy revolution

Minister for Economic Affairs and Energy Sigmar Gabriel sees the signed contract as an important signal for the European electricity market.

"We support this new submarine cable connection because it is an important step toward supply security for Germany," Gabriel said. 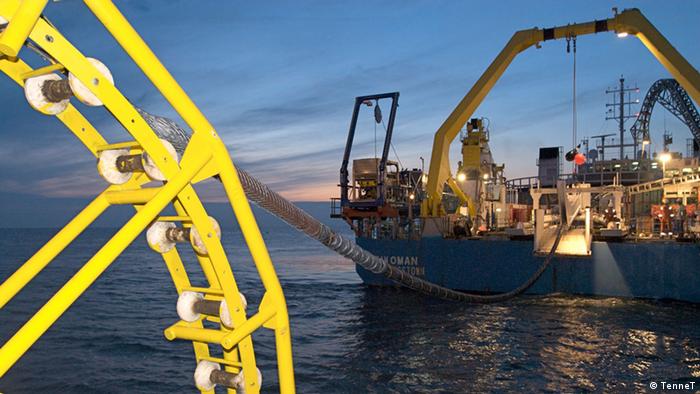 The laying of underwater cable in the North Sea

Also pleased about the network's expansion to Norway is Schleswig-Holstein. The northern German state is a massive driver of the renewable energy revolution and wants to be a major German exporter of electricity by 2020, particularly in wind power. Consequently, the construction of the high voltage line to Norway is a major policy focus for Schleswig-Holstein.

"NordLink is a cornerstone of the European energy revolution to renewables. The state government's efforts regarding the project are now bearing fruit," said Robert Habeck, Minister of Energy, Agriculture, the Environment and Rural Areas. "Only with the development of this network can we replace nuclear power and coal power. And with that, we facilitate the renewable energy revolution."

The importance of the submarine cable is also emphasized by Hans-Ulrich Rösner from the World Wide Fund for Nature WWF. But the environmentalist has qualms at the same time.

"The submarine cable goes through Wadden Sea National Park and infringes upon nature, especially through the laying of cable."

The new energy link is set to be ready in 2020 and cost 1.5 to two billion euros ($1.7 billion to $2.28 billion). Norway is further expanding its role as Europe's energy reservoir and power hub , with new submarine cables already in place with the Netherlands, Sweden and Denmark.

In addition, the British government will decide this spring whether to build a subsea connection with Norway.

"The new cable will allow the UK to import large amounts of clean green electricity from hydropower and store our wind and solar energy. This will secure our supply and keep energy prices low," said Ed Davey, UK Secretary of State for Energy and Climate Change.

Another submarine cable is also planned for 2019 between Denmark and the Netherlands to optimize the energy supply from renewable energy sources.

The European Commission welcomes the network expansion and is willing to financially support the endeavor.

Low oil and gas prices may persist for several years. That will have negative consequences for investment in renewable energy and energy efficiency. But it also presents an opportunity for carbon pricing, experts say. (12.02.2015)