A post-Brexit "upsurge in sinister and menacing behavior" has caused two ports in Northern Ireland to pull their staff from border control duty. 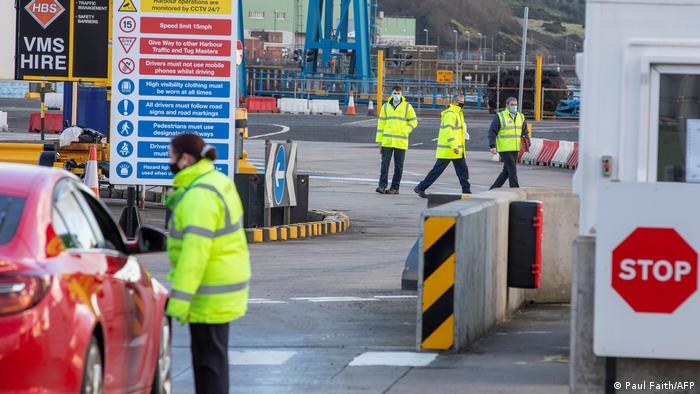 Officials pulled a dozen staff members from duty at Larne Port after an "upsurge in sinister and menacing behavior," Mid and East Antrim Borough Council said.

This included new graffiti in the Larne area, 32 kilometers (20 miles) northeast of Belfast, that "referenced increasing tensions around the Northern Ireland Protocol."

The council referred to post-Brexit tensions over Northern Ireland and describing port staff as "targets.''

Why is there tension at the ports?

The relationship between Northern Ireland and the Republic of Ireland was characterized by decades of sectarian violence. Known as the Troubles, it began in the 1960s and lasted until 1998.

But Brexit saw tensions between the two neighbors rise again when Ireland remained in the EU while Northern Ireland exited the bloc along with the rest of the UK.

Central to this tension was the issue of the Irish border. Following Brexit, both sides found it necessary to reimpose checks on goods travelling between the UK and the EU bloc.

But there could be no physical, or "hard" border set up between Northern Ireland and the Republic of Ireland. The removal of a physical border was viewed a key pillar of the peace process that ended the conflict.

To solve this problem, a new "regulatory" border was established between Northern Ireland and Great Britain (England, Scotland and Wales).

Pro-British Unionist politicians have spoken out against the move, saying it amounts to a border in the Irish Sea between Northern Ireland and the rest of the UK. Police have warned that violent pro-British Loyalist groups could capitalize on the tensions.

In a joint statement, they said: "the Executive is united in condemning any threats made against workers and staff going about their duties at Belfast and Larne ports."

"There is no place in society for intimidation and threats against anyone going to their place of work," they said.

A spokesperson for UK Prime Minister Boris Johnson said: "The safety of staff at our ports ... is our top priority and we are working closely with the PSNI (Northern Irish police service) to better understand the situation."