The High Court in Belfast has handed abortion rights activists a win, finding that the country's laws conflict with European human rights. Northern Ireland could be following Ireland towards looser legislation. 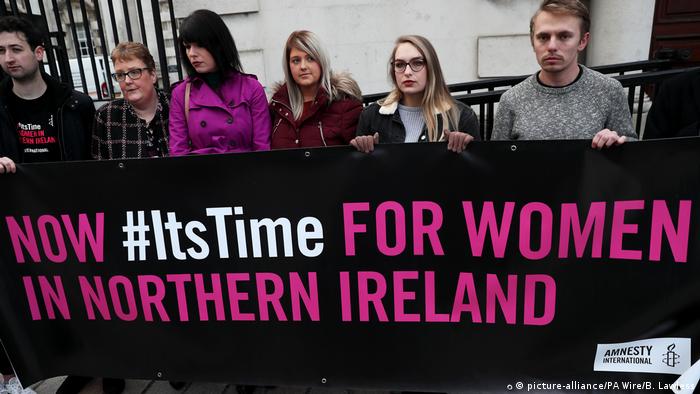 Northern Ireland, one of the four nations of the United Kingdom, has faced growing pressure to liberalize its abortion laws, which ban termination of pregnancy — unless the woman's life is at risk or she could face permanent mental or physical damage.

Pregnancies caused by rape or incest, fetal abnormalities, or conditions which will nearly certainly cause a baby to die before, during or shortly after birth, are not grounds for an abortion.

Judge Siobhan Keegan wrote in the ruling that "the abortion law in Northern Ireland is incompatible with Article 8 of the European Convention on Human Rights ('ECHR') in relation to fatal fetal abnormality ('FFA')."

The case was brought to court by Belfast inhabitant Sarah Ewart. In 2013, when she was 20 weeks pregnant, an ultrasound revealed a fetal abnormality in her baby. After being refused an abortion in Northern Ireland, she traveled to England, which has looser abortion laws, and terminated the pregnancy. 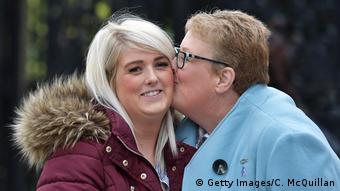 Ewart argued that Northern Ireland's law preventing her from accessing abortion was an infringement of her human rights as guaranteed by the European convention.

In a statement, Ewart said she was "massively relieved ... Too many women in Northern Ireland have been put through unnecessary pain by our abortion law."

Northern Ireland is one of the UK's four devolved nations. Its abortion laws differ greatly to those of Great Britain, made up of Scotland, Wales and England. The region shares its island, as well as numerous cultural, political and religious ties, with the largely Catholic Republic of Ireland to its south.

Northern Ireland's religious communities, both the Catholics, typically aligned with Ireland, and the Protestants, who are usually closer to Britain, have historically opposed liberal abortion legislation. Its restrictive laws are similar to those previously in place in its southern neighbor. The laws there were overturned in a referendum last year, increasing calls for Belfast to do the same.

In 2017, Northern Ireland's power-sharing government between the Protestant and Catholic political parties collapsed. Catholic nationalist party Sinn Fein is now campaigning for revised abortion laws, a change made within weeks of the abortion referendum in the Republic of Ireland. But the country's largest party, the conservative and Protestant DUP, objects to any changes.

The British Parliament in Westminster voted in July to decriminalize abortion in Northern Ireland by October 21, unless the local government reconvenes to take its own action.

Thursday's ruling means that the Belfast court could force lawmakers to act, should the scheduled change of law fail to be imposed.

A suspended jail sentence for an abortion in Northern Ireland has reignited the debate in the UK. While cultural stigma and draconian law remain, women's human rights will continue to be breached, experts say. (06.04.2016)

Former soldiers have marched to remember the British military's 38-year operation in the once-troubled province. Hundreds of troops were killed trying to maintain order in one of the army's darkest chapters. (17.08.2019)