North Rhine-Westphalia prepares for Belgium nuclear accident with iodine tablets | Germany| News and in-depth reporting from Berlin and beyond | DW | 24.05.2016

Amid growing safety concerns over Belgium's aging nuclear reactors, Germany's most populous state has purchased iodine tablets in case of a nuclear accident. Activists insist the best solution is to close the plants. 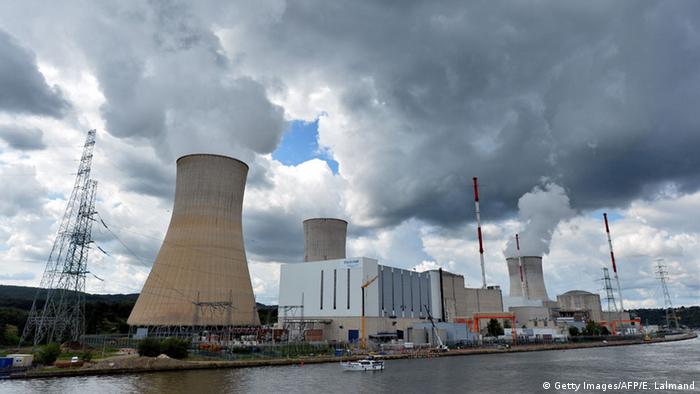 With plans already in place to end its domestic use of nuclear power by 2022, Germany has taken a clear stance on its use of nuclear energy since the 2011 Fukushima disaster.

But while Berlin pushes forward with alternative renewable energy sources at home, across the border in Belgium, its efforts are overshadowed by two controversial nuclear power plants.

Tihange 2 and Doel 3 were both scheduled to be shut down in 2015. Under a deal to preserve jobs and invest in clean energy, however, Belgian officials decided to extend their operation until 2025.

Following reports that pressure vessels at both reactor sites have shown signs of metal fatigue, the two reactors have become a source of growing tension between Germany and Belgium in recent months. Just 60 kilometers (37 miles) away from Tihange, lies the German city of Aachen - home to some 240,000 people and best known as the residence of ninth century emperor, Charlemagne.

In April, German Environment Minister Barbara Hendricks called on Brussels to carry out more tests to at the plant to show that Belgium "takes the concerns of its German neighbors seriously." The 40-year-old reactors should be closed "until outstanding safety issues are resolved," the minister said.

Fears have also grown over the possibility of terrorists targeting nuclear power plants, particularly after the March 22 terrorist attacks in the Belgian capital. 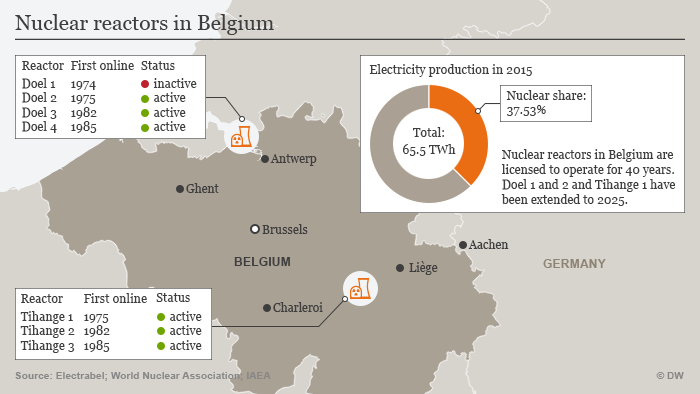 Less than a month later, however, Belgian Health Minister Maggie De Block announced that in the case of a nuclear disaster, people living within a 100-kilometer (60-mile) radius of the reactor would be provided with iodine tablets in a bid to minimize the effects of radiation. With Belgium only 300 kilometers at its widest point, the majority of the country's 11-million population would effectively be included in the measure.

Having heard nothing from Brussels on the closure of either power plant, the North Rhine Westphalia (NRW) Interior Ministry announced on Tuesday that they, too, would be taking similar preventative measures, with iodine tablets being made available to the over 45-year-olds, children and pregnant women in the case of a serious nuclear leak. 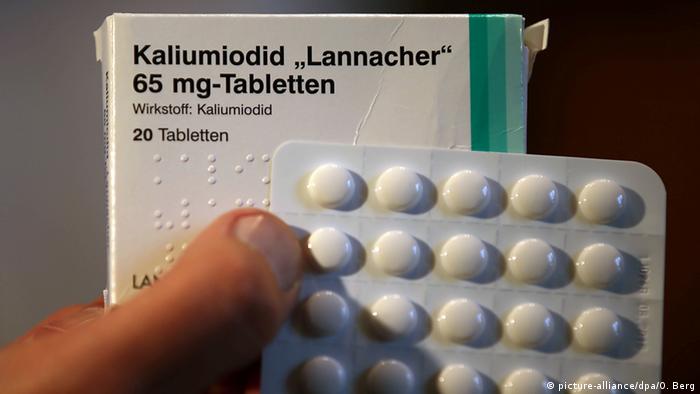 Although the federal state is responsible for footing the bill, NRW has already started to purchase the tablets. Should a nuclear disaster occur at one of the nearby reactors, local catastrophe protection authorities would be responsible for the distribution of the tablets and stipulating exactly if and when they should be taken, Mailänder said.

In the case of a nuclear disaster, timing is paramount in the administration of iodine tablets. The medication works by supplying the thyroid gland with a concentrated amount of "healthy" iodine. In theory, this should prevent the gland from absorbing any radioactive iodine released into the air in a nuclear accident.

Taken too early, however, "healthy" iodine will already have been partially or even completely broken down. Taken too late, the radioactive iodine will have already been absorbed by the thyroid - potentially increasing the risk of thyroid cancer. 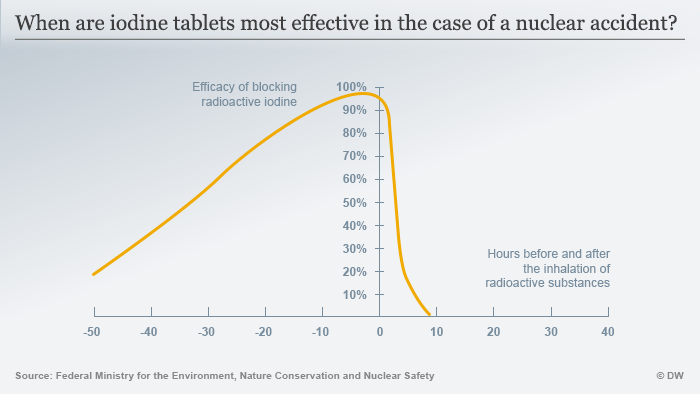 The only nuclear accident to date, which called for the use of iodine tablets was the 1986 Chernobyl disaster. In Poland, some 10.5 million children and 7 million adults were successfully administered the "healthy" iodine, with later examinations reaping only positive results. In Belarus, however, where no iodine tablets were administered, thyroid cancer in children - which is usually extremely rare - was reported 100 times higher than normal.

Anti-nuclear energy campaigners welcomed the move by the NRW Interior Ministry on Tuesday, but vowed to continue their campaign to close the nuclear reactors.

"But the better solution would be to bring an end to the source of the danger," he added. "We need to shut down the nuclear power plants once and for all."