Paul Milgrom and Robert Wilson have won the Nobel Prize in economics for improving auction theory. The award caps a week of Nobel Prizes, including the awards for medicine, physics, chemistry, literature and peace.

US economists Paul Milgrom and Robert Wilson have won the Nobel Prize in economics "for improvements to auction theory and inventions of new auction formats," the Nobel Committee announced Monday.

"Auctions are everywhere and affect our everyday lives," the committee said in a statement, adding that the laureates' innovations had benefited "sellers, buyers and taxpayers around the world."

"The new auction formats are a beautiful example of how basic research can subsequently generate inventions that benefit society," the statement added.

Auctions are used to buy and sell a variety of goods and services, including electricity, financial assets, fishing quotas and emissions allowances.

The prestigious award comes with a 10-million krona ($1.1 million; €932,000) cash prize and a gold medal. It is the last of the Nobel Prizes to be announced and comes after awards for medicine, physics, chemistry, literature and peace were announced.

The two economists designed rules for the US Federal Communications Commission's 1994 auction of radio frequencies to telecom operators. Their format has since been used to allocate licenses worth billions globally.

"The two researchers deservedly received the Nobel Prize for economics. They had been under discussion for quite some time," Achim Wambach, president of the Centre for European Economic Research (ZEW) in Germany's Mannheim, told DW shortly after the announcement. Wambach had the two on his shortlist of probable winners.

"They set standards for the auctioning of radio frequencies that are used worldwide and are continuously being further developed," Wambach said.

Germany has been using their auction format at least since the auction of 3G mobile phone licenses in 2000, Wambach said.

Both Milgrom and Wilson are based at Stanford University in California

Milgrom said he received news of their win "in a strange way.''

"I got a knock at my door from Bob Wilson,'' he told The Associated Press news agency. "He was my Ph.D. advisor, and he lives right across the street from me.'' 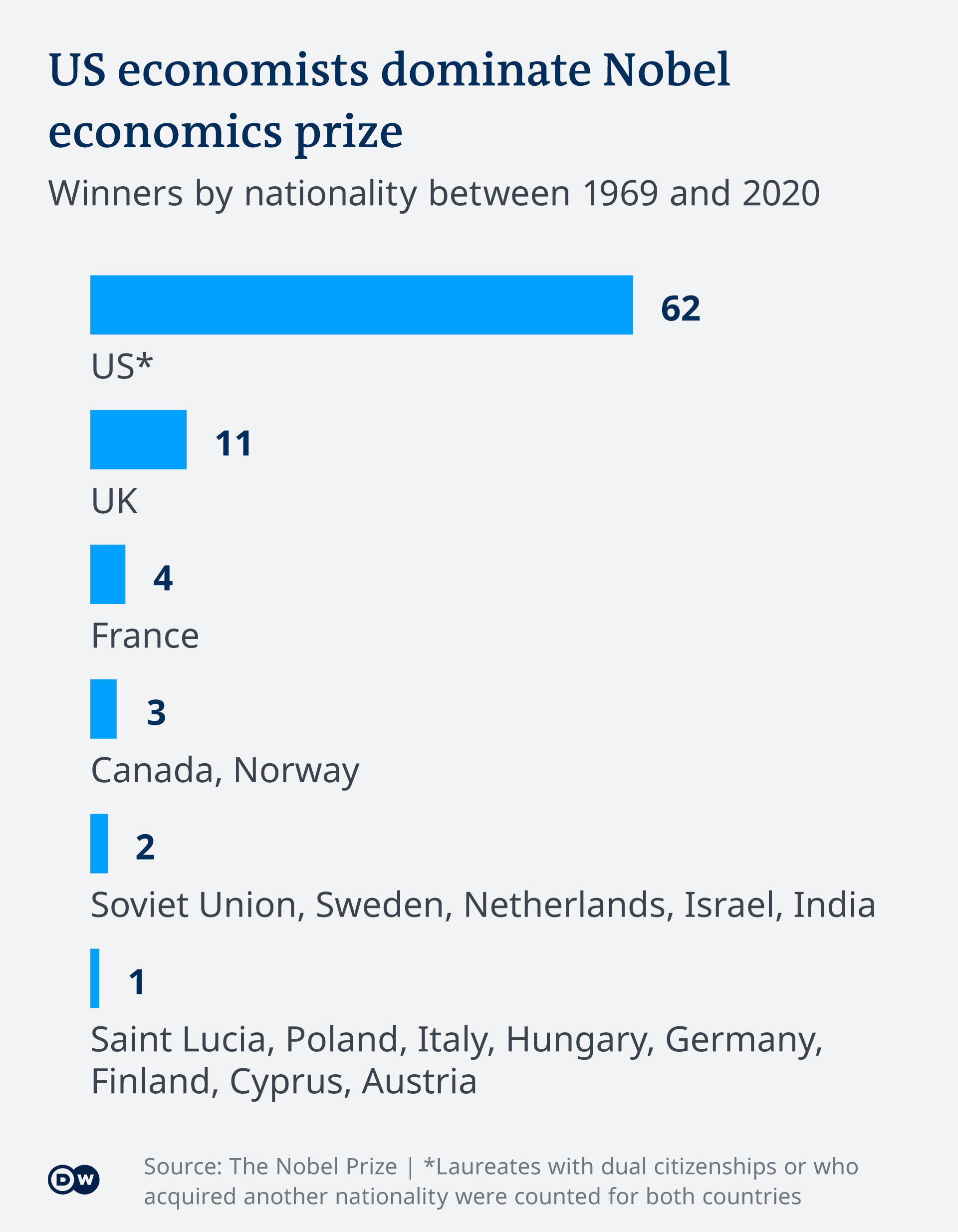 Milgrom said students, friends and colleagues had long suggested he and Wilson might be due for the prize.

"It's really sweet actually,'' he said. "It's nice to have their respect but their affection as well.''

Speaking to reporters by telephone, Wilson welcomed the "happy news" of the award and shared his limited personal experience with auctions.

"I promised myself never to actively participate in an auction," Wilson said. "My wife points out that we bought skiboots on eBay — I guess that was an auction."

Not created by Alfred Nobel

The Nobel economics prize — technically known as Sveriges Riksbank Prize in Economic Sciences — was created by the Swedish central bank "in memory of Alfred Nobel."

The award, the only Nobel Prize not established by the Swedish inventor and philanthropist, is based on a donation received by the Nobel Foundation in 1968 from Sveriges Riksbank on the occasion of the bank's 300th anniversary.

Last year, the Royal Swedish Academy of Sciences awarded the prize to Abhijit Banerjee, Esther Duflo and Michael Kremer for their research to help alleviate global poverty. Duflo, who was 46 years old then, became the youngest and only the second female to win the award.

A total of 86 individuals, mostly from the US, have won the award since its inception in 1969.