No stability in sight for Somalia

The international community had hoped that Somalia would soon stabilize. But the recent attack on a UN compound shows that the security situation is still precarious and the terrorist militia al-Shabab is still active. 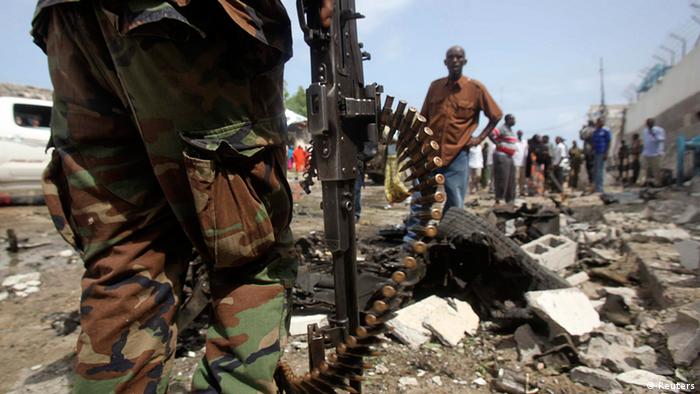 In early May this year, the United Nations passed a resolution to support Somalia by sending in up to 200 experts to advise the government and local authorities. The aim was to stabilize the security situation in the country. At the time, security expert Ahmed Abdi Hassan, a former senior official with the national security forces, expressed the hope that "the resolution would help the Somali government to improve its security situation."

But the United Nations' additional forces could not prevent Wednesday's (19.06.2013) suicide bombing at the United Nations Development Program (UNDP) building in the Somali capital, Mogadishu that killed 15 people, including four foreign nationals.

South African arms manufacturer Denel confirmed that two of its employees were killed in the attack. 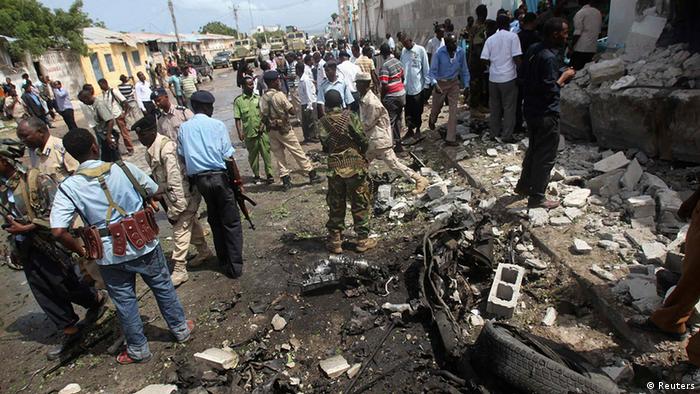 Via Twitter, al-Shabab claimed responsibility for the attack. In an interview with the German Press Agency (dpa), the newly appointed UN Special Envoy to Somalia, Nicholas Kay, condemned the attack as a "desperate attempt to derail Somalia from its course towards reconstruction and peace."

Earlier, 34 people were killed on 14 April 2013, in a series of coordinated suicide attacks. The UN Special Envoy for Somalia at the time, Augustine Mahiga, warned then of further "terror attacks" by al-Shabab. The security situation was also the main topic at the Somalia conference in London in early May, a conference which was also overshadowed by an attack aimed at a high level delegation from Qatar.

The attacks are part of the asymmetric form of warfare, with which the Somali al-Qaeda splinter group al-Shabab (Arabic for "the boys") is trying to discredit the new government of President Hassan Sheikh Mohamud.

After his victory over transitional President Sheikh Sharif Ahmed (widely regarded as corrupt) in September 2012, the new president has addressed a number of burning issues in the country. His priority list includes building institutions based on the rule of law, establishing a powerful army and police, fighting corruption and increasing public security. This has been well received by his local partners.

A clear sympathy bonus for the engineer and later university dean is the fact that he has no political background, unlike the usual representatives of the Somali political class.

However, as a member of the influential Hawiye ethnic group, he knows how clan leaders can be an indispensable instrument of power in a country dominated by ethnic loyalties.

Mohamud's new prime minister Abdi Farah Shirdon Saaid is also a close ally, which raises hope that in this new government there will be no wrangling between the president and prime minister. 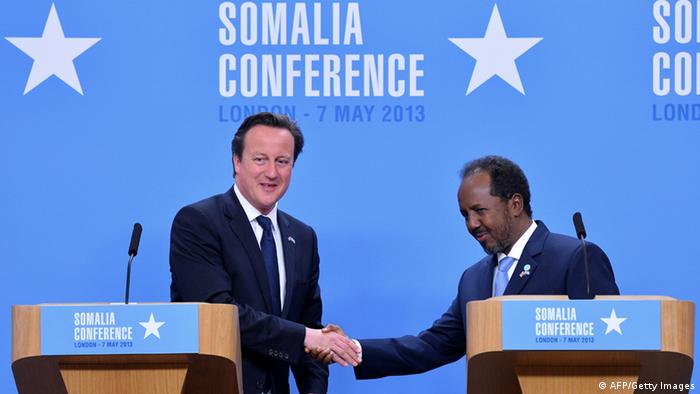 The new government is regarded positively by Somalis in the diaspora. Many Somalis who lived in the US, UK and neighboring Kenya are now returning home. Some have given up well-paid jobs and a secure existence in order to come back and help in the reconstruction of their home country or establish business connections.

The few airlines that fly to Mogadishu are fully booked for weeks in advance. The legendary beaches of Mogadishu, once dubbed the "Pearl of the Indian Ocean" by Italians, are once again open for bathing. The shrill tones of mobile phones, strictly prohibited by al-Shabab militias, can be heard again.

But attacks like the one on the UN office are dampening the euphoria in the country. Moreover, "the progress that one would wish to see, has failed to materialize," says Markus Hoehne from the Max Planck Institute in Halle.

According to Hoehne, this is not surprising, especially when you look at the difficult situation that Somalia has been going through. He sees merely "baby steps towards a possible stabilization of Somalia." Annette Weber, from the Institute for International and Security Affairs in Berlin and a long-time observer of Somalia, agrees.

"The main dilemma of the Mogadishu government is the fact that it exists only in Mogadishu and it has no influence in other areas of the country," Weber told DW. It is crucial, she says, that the central government should extend its authority, mainly to southern Kismayu, the former stronghold of al-Shabab.

Militants linked to al Qaeda have caused multiple deaths after breaking into the United Nations’ main compound in the Somalian capital, Mogadishu. The rebel group al Shabab claimed responsibility for the attack. (19.06.2013)

The European Union has pledged 44 million euros ($58 million) toward building Somalia's justice system and police force. Delegates gathered in London Tuesday for a conference on the east African nation. (07.05.2013)

A car bomb has exploded in Somalia's capital, Mogadishu, killing at least eight. Government officials traveling in vehicles were targeted. (05.05.2013)