No Rescue of German Hostage Imminent | Germany | News and in-depth reporting from Berlin and beyond | DW | 06.12.2005

No Rescue of German Hostage Imminent

11 days after the abduction of a German archeologist and aid worker in Iraq, Berlin still has no sign from the kidnappers and is far from optimistic the hostage will be released soon. 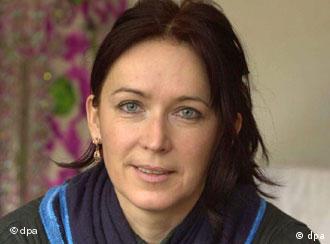 German authorities said Monday that all channels were being used in order to establish contact but confirmed that the whereabouts of Susanne Osthoff and her Iraqi driver were still unknown.

In the German capital, the special crisis team working day and night in a bid to make contact with the kidnappers of Susanne Osthoff has so far been without any success.

Wolfgang Bosbach, a senior member of Chancellor Angela Merkel's Christian Democrats, on Monday conceded in an interview with the German TV channel N24 that the government still had no information about the fate of Osthoff. And he was not optimistic about the prospects for a quick solution: 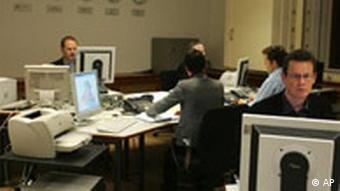 Working around the clock

"It can take days, weeks, possibly even months," he said. "This is why it is crucial that we get in contact with the kidnappers as soon as possible. Being in touch does not necessarily mean that we will also have an agreement ensuring Osthoff's release. Up to now we don't even have a sign that the hostage is still alive. The more time passes the more difficult the situation gets."

Susanne Osthoff was seized on November 25. In a video released last Tuesday, the kidnappers threatened to kill her unless Germany stopped training Iraqi police.

"This is one of the most difficult situations a government can find itself in," said Bosbach. "The hostage's life must be saved, but we cannot give in to political demands."

His statements backed up the position taken by Chancellor Angela Merkel in an interview on public broadcaster ZDF Sunday. Merkel stressed that Berlin would do everything in its power to save Osthoff's life, but reiterated the government's refusal to give in to political blackmail.

"Fortunately, there is broad social consensus on this issue and across the political spectrum," she said. 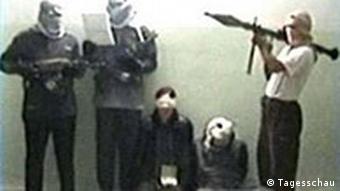 A video of Osthoff was released shortly after her capture

German press reports say the deadline attached to the demand expired on Friday, but this has not been confirmed. It is not clear either whether the first kidnapping of a German national in Iraq is in fact politically motivated or could be solved by paying ransom to the kidnappers.

In order to protect the hostage, the German government is unwilling to speculate either about the motives behind the kidnapping or the identity of the kidnappers.

"We are concerned that making this sort of information public would jeopardize out efforts," said Ruprecht Polenz, head of the Bundestag's Foreign Relations Committee. 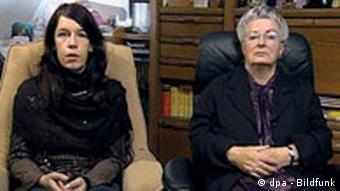 Pleading for the hostage's release

The family of the victim are also renewing their calls for her release. Osthoff's mother on Monday issued another emotional plea to return her daughter to safety. In an interview with a German newspaper she said that her daughter was "more Iraqi than German."

Osthoff is a trained archeologist who has been doing aid work in Iraq for several years. The 43 year old convert to Islam was married to an Arab and speaks fluent Arabic.

In Osthoff’s home village of Glonn near Munich, people have been gathering for vigils. Candles have been lit at the entrance to the city hall right beneath a photo of Osthoff. The residents of the small Bavarian village are simply shocked, says the mayor Martin Esterl. He met Susanne Osthoff during the Iraq war in 2003 when she was about to set off for her first humanitarian trip to Iraq.

"I personally was very impressed by her," he said. "I got to know her as a woman who is strong-willed, who knows exactly what she wants and who is very committed to her mission of helping the Iraqi people. Susanne Osthoff seemed determined to pursue her goal without compromise." 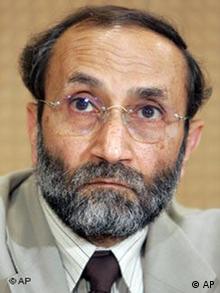 Meanwhile, the president of Germany’s Muslim community, Nadeem Elyas, said he had written a letter to the 57-nation Organization of the Islamic Conference, asking leaders who are due to meet later this week in Saudi Arabia to launch an initiative for Osthoff's release.

I would consider every possible means of saving her life," he said, and called on Muslim leaders around the world to speak out against abuse of Islam's peaceful teachings.

Germans in Iraq: "Everyone Knows the Risks"

As the family of kidnapped German archeologist Susanne Osthoff pleaded for her life, a German working in Iraq took stock of the situation. (Dec. 2, 2005)

German Chancellor Angela Merkel issued a joint appeal with other leading figures Sunday for the release of a German archaeologist abducted in Iraq as the reported deadline for meeting the kidnappers' demands passed. (Dec. 4, 2005)

The kidnapping of a German aid worker in Iraq proves that Germany's stark opposition to the US-led war will not be enough to protect the country from terrorism, according to Interior Minister Wolfgang Schäuble. (Nov. 30, 2005)