Christopher Nkunku came off the bench to lay on Dominik Szoboszlai's goal in RB Leipzig's 1-0 win over Bayer Leverkusen. While RB cemented a likely Champions League spot, Leverkusen are in danger of missing out again. 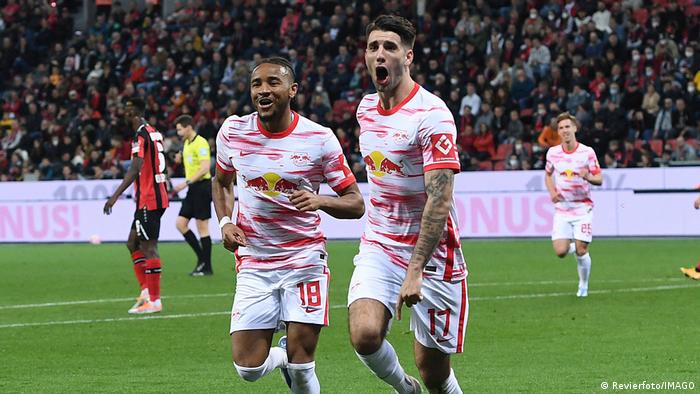 The 199 Bundesliga first halves RB Leipzig had played in their history before Sunday had offered plenty of variety: title challenges, red cards, wonder goals and near-weekly protests about the club's ownership model among them.

But Sunday's away clash with Bayer Leverkusen saw a first, with Leipzig failing to have a shot in the first 45 minutes. Domenico Tedesco had seen enough and brought his star man, Christopher Nkunku, off the bench at the break. The former Schalke coach was presumably trying to rest his talisman, with RB in the semifinals of the Europa League and German Cup.

The impact was instant, with the creative French forward claiming a penalty seconds after coming on before Leipzig's first effort on goal, from skipper Willi Orban, came back off the post. The most obvious contribution Nkunku made was  the expertly-weighted through ball that allowed Dominik Szoboszlai to clip home the deflected winner with the outside of his boot. But his mere presence was enough to provoke panic in the opposition.

That assist was Nkunku's 19th of a breakout campaign that's also seen him score 30 goals in 44 games in all competitions. His consistency, and Tedesco's arrival to replace Jesse Marsch in December, have been the catalysts for a 2022 run of form that leaves them with a chance of two trophies and Champions League qualification.

Given the level of Nkunku's performances this term, bigger clubs will likely make an effort to sign him come the offseason. So RB's first half display will have offered Tedesco some food for thought on how tough it will be to get by without him. Despite the presence and talent of Szoboszlai, Dani Olmo, Andre Silva and Yusuf Poulsen, Leipzig lacked any spark.

"It was a difficult game. We weren't precise enough in the first half," admitted goalkeeper Peter Gulacsi afterwards. "Obviously it's not easy when you play on Thursday [in the Europa League] and have to go again on Sunday. But we're used to it and the second half was better."

The opposite was true for Leverkusen, who lost third spot to their opponents and are looking over their shoulders at the Bundeliga's two big overachievers, Freiburg and Union Berlin. The pair are one and five points behind the Werkself respectively, with four games remaining.

A dreadful second half of 2020-21, with just five wins from 19, saw Leverkusen miss out on the Champions League and the current dip in form that's also seen them lose to Cologne and draw with Bochum in the last five games, leave them with work to do. Gerardo Seoane's side play bottom club Greuther Fürth next weekend but then face a tough run in of Eintracht Frankfurt at home, Hoffenheim away and a final day home clash with Freiburg, which may yet be decisive. 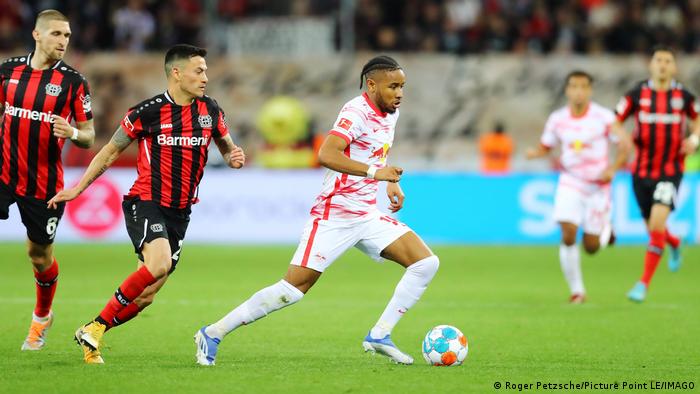 With kinder Bundesliga fixtures remaining, RB Leipzig are now favorites to make the Champions League again, but those two semifinals do pose a threat, with fatigue an issue at this stage of the season.

"We have a deep squad and therefore enough options to be fresh on Wednesday," said Tedesco of the German Cup tie against Union that comes the midweek before a two-legged tie against Rangers in Europe.

Deep as RB's squad may well be, Sunday made it clear that they aren't the same side without Christopher Nkunku.