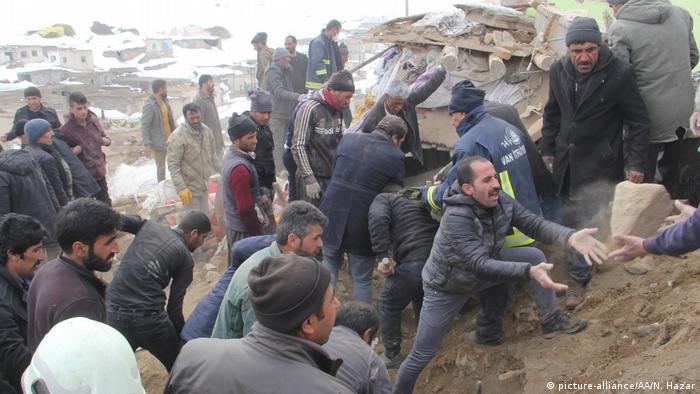 Twenty-one people were injured — including eight who were in a critical condition, according to the health ministry.

"Search and rescue efforts are ongoing," Soylu said, adding that officials think people are still buried under the collapse of more than 1,000 buildings in several border villages.

The quake had a depth of 5 kilometers (3.1 miles), the European Mediterranean Seismological Centre (EMSC) said.

The epicenter of the quake, which struck at 9:23 a.m. local time (553 UTC), was near the Iranian village of Habash-e Olya, less than 10 kilometers (six miles) from the Turkish border, according to the USGS.

An Iranian official told state TV that "rescue teams have been dispatched to the area ... it is not a populated area in Iran's West Azerbaijan province."

However, another local official said it is "very likely" that there will be casualties or damages, Iran's state TV reported. The official added that the earthquake was felt in several cities, including Khoy, Urmiah and Salmas.

Iran and Turkey are among the most earthquake-prone countries in the world. An earthquake last month in eastern Turkey killed more than 40 people, while another in Iran caused structural damage to homes without causing any fatalities.

Search and rescue teams are racing to reach dozens of people trapped under collapsed buildings following the quake in Elazig province. At least 22 people have been killed and hundreds injured. (24.01.2020)

Over 40 people were rescued from the rubble following a powerful earthquake in eastern Turkey, emergency officials said. The death toll continued to climb as hundreds of aftershocks rocked the affected areas. (25.01.2020)