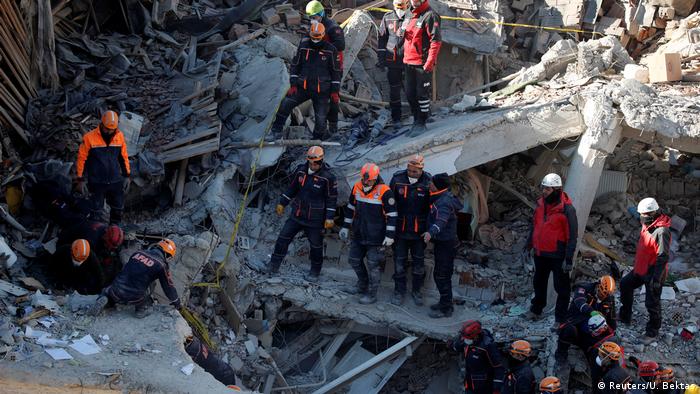 Emergency services in the eastern Turkish city of Elazig continued efforts on Sunday to rescue residents from collapsed buildings after a 6.8 magnitude earthquake shook the region and left at least 38 people dead.

A total of 45 people had been pulled alive from under the rubble, officials said. But hopes of finding more survivors are fading as rescue teams struggle to comb through debris in freezing temperatures.

Many people in Elazig province and nearby Malatya spent several hours, and some of them days, under piles of rubble before rescue crews were able to reach them.

A 35-year-old woman named Ayse Yildiz was trapped for 28 hours under her apartment building in Elazig with her 2-year-old daughter, Yusra. According to Turkish media, rescue workers pulled the young girl from the wreckage at around 8:30 p.m. local time (1730 UTC) on Saturday, but it took nearly five more hours to rescue Yildiz, whose arm was trapped under a pile of rubble.

Another woman, named Azize, was pulled from the rubble after being trapped for 17 hours in Elazig's Mustafapasa neighborhood. She had contacted authorities and spoke to a worker by telephone during the rescue, the Anadolu news agency reported.

Twelve-year-old Mirac Disli was rescued after 11 hours but later died in hospital, Turkish media said. He was trapped with his six-months-pregnant mother, Pinar, and his father, Meric, who were rescued 12 hours after the earthquake and were receiving treatment.

Turkey's Disaster and Emergency Management Presidency (AFAD) said 18 people died and more than 600 were injured in Elazig, the region hit the hardest by the earthquake. The epicenter of the 6.8 magnitude quake was in the small lakeside town of Sivrice, approximately 30 kilometers (19 miles) south of the city of Elazig.

As well as the overall death toll of 35, more than 1,600 people have been injured. AFAD said 76 buildings were destroyed and more than 1,000 were damaged in the quake.

In a press conference in Istanbul on Sunday, Turkish President Recep Tayyip Erdogan said every effort was being made to alleviate conditions. He also promised housing for displaced residents as soon as possible.

"Turkey has begun to heal the wounds of this great disaster in unity, togetherness and coming together," he said. He added that "every effort was made to ensure citizens whose homes have collapsed or been damaged will not suffer in this winter period."

The Pacific Ring of Fire is aptly named. It's a string of volcanoes in the Pacific Ocean, and the region is prone to earthquakes. In fact, most earthquakes strike within the ring. Here's five facts. (13.01.2020)

The death toll from an earthquake is Afghanistan continues to rise. Rescue efforts are especially difficult in the mountainous region. Adding to the challenge is the fact that many international aid agencies left the country after the Taliban took over.

The strong tremor struck near Fukushima prefecture, but there was no major damage at the disabled nuclear power station. Millions were without power and manufacturing plants had to close temporarily.