Nigerian authorities estimate 200 people or more were killed in Zamfara state during attacks by armed bandits. The attacks came after military airstrikes on the marauders' hideouts. 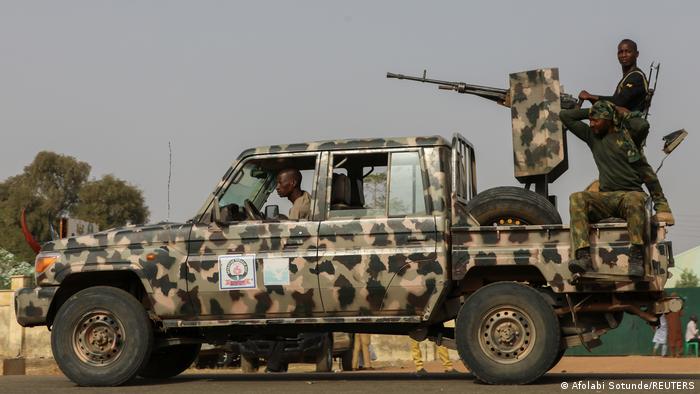 President Muhammadu Buhari condemned the killings of 200 or more people in northern Nigeria's Zamfara state following revenge attacks carried out by armed bandits whose hideouts were targeted in airstrikes earlier in the week.

"The latest attacks on innocent people by the bandits is an act of desperation by mass murderers, now under relentless pressure from our military forces," Buhari said in a statement.

He vowed the military would not cease its efforts to quash banditry. The military and police have not commented on the attacks.

What happened in Zamfara state?

In the middle of the week, hundreds of armed bandits on motorbikes rode into 10 villages in the districts of Anka and Bukkuyum, firing indiscriminately, looting and burning homes.

Babandi Hamidu, a resident of Kurfa Danya village, told AFP the bandits would shoot "anyone on sight."

"More than 140 people were buried across the 10 villages and the search for more bodies is ongoing because many people are unaccounted for," Hamidu said.

Thousands missing in Nigeria after years of conflict

On Saturday, residents told Reuters they regained access to their villages. Mass burials are being organized.

Resident Ummaru Makeri, who lost his wife and three children in the attacks, told Reuters 154 people had been buried, including vigilantes.

Others put the death toll at 200 at least.

Who are the bandits?

Northern Nigeria has long experienced confrontations between herders and farmers over land access.

Some groups have evolved into criminal gangs, taking up arms and terrorizing locals.

'In Nigeria, the distribution of wealth is uneven'

What has the military done to try and stop bandits?

Early last week, Nigeria's military said it carried out early morning airstrikes in the Gusami forest and west Tsamre village in Zamfara state. The military said over 100 bandits were killed, including two leaders of the armed gangs.

On Wednesday, the government formally labeled bandits as terrorists which provides more resources to take them on as well as their support networks.

Since 2020, northwestern Nigeria has experienced a sharp rise in criminality as the territory becomes increasingly lawless due to weak central authority.