Nigerian information minister: 'This government does not violate anybody's right'

DW's Tim Sebastian met Lai Mohammed, Nigeria's minister of information and culture in London to discuss the state of Nigerian politics and the steps that the government is taking to address the concern of international bodies and civil society.

Mohammed dismissed the accusations as simple "confusion" and "misrepresentation" of the situation in Nigeria. According to the minister, the Buhari "administration, in particular, has been very sensitive to the issue of human rights".

But while Mohammed says that "people have been punished" for human rights violations in Nigeria, Human Rights Watch and the United Nations disagree. The UN Special Rapporteur on extrajudicial, summary or arbitrary executions, Agnes Callamard, has pointed out that the attempts of Nigeria to address its record of abuses have been entirely insufficient:
"... the lack of effective investigations, the absence of meaningful prosecution, the militarisation of policing... are compounded by the lack of transparency."

Mohammed says that "no policy targeted people's human rights," but the record of the Nigerian government in addressing the issues is plainly wanting. For instance, Human Rights Watch reported that "a Presidential Panel of Inquiry set up in 2018 to investigate abuses by the Special Anti-Robbery Squad (SARS) police unit have not been made public."

The problems in the unit were known to the government. It was disbanded and then later reconstituted, but the results of the investigation were never made public. Mohammed rejected the idea that the government had "covered up damaging evidence" but still did not explain what happened to the report.

The problem with transparency and collaboration with international bodies is nothing new, The UN says Nigeria has failed to meet its obligation to report on the state of civil and political rights in the country. Mohammed dismissed the claims: "we operate within international regulations and laws."

When confronted with human rights violations, the Buhari government has pointed to the now-decade-old conflict with the Islamist insurgent Boko Haram to explain the situtation in the country. 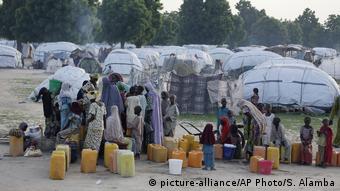 "Nigeria has been locked in a war of attrition with Boko Haram for almost a decade. And even then the military has been very careful to ensure that as much as possible, rights are not violated," the minister argued.

The UN has decribed rights violations in Nigeria as being of "extreme concern... an injustice pressure cooker... with warning signs flashing bright red."

As Buhari's first term was coming to an end, the governmentincreased pressure on opposition media. The Daily Trust newpaper was raided in January. In 2019 journalists were detained under charges of treason, television and radio stations had their licenses suspended and a crack down on social media began.

Mohammed who oversees the information portfolio for Buhari's government says that "when it comes to freedom of the press we are doing extremely well."

Freedom House found in 2018 that in Nigeria, civil liberties such as the freedoms of speech, of expression, and press freedom are "limited by laws on sedition, criminal defamation, and publication of false news."Reporters without Bordersranks Nigeria 120 out of 180 countries its 2019 report: "journalists are often threatened, subjected to physical violence or denied access to information by government officials, police and sometimes the public itself."

NGOs have condemned controversial legislation on hate speech in Nigeria. The proposed law would punish hate speech with fines and jail depending on the severity of the crime, in cases where targets of hate speech are killed, the author could face the death penalty.

The bill recieved a strong rebuke from the Economic Community of West African States which ruled the proposed legislation fell foul not only of Universal Declaration of Human Rights but also of the Nigerian Constitution.

The information minister insisted the bill was put forward by members of parliament and said that if his president blocked it he could be accused of dictatorship.

The death of the founder of Boko Haram 10 years ago was a turning point for Nigeria. The organization went from being an Islamist sect to a terror organization, and in the process it lost some of the support it had. (29.07.2019)

The 25 boys and girls allegedly cooperated with the Islamist terror group Boko Haram. Human and children's rights activists are concerned at how minors are being treated by both militants and Nigeria's army. (04.10.2019)

Press freedom under pressure in Nigeria

Nigerians flee from Boko Haram to town of Monguno

The ban has been in effect since early June, when the tech company deleted an abusive tweet from President Muhammadu Buhari. The government's response swiftly attracted international condemnation.

Gunmen have abducted hundreds of children in an attack on a boarding school. Nigerian President Muhammadu Buhari said his government would not "succumb to blackmail by bandits."