Nigerian President Muhammadu Buhari has admitted that over 50 civilians have been killed in the worst violence in years. Protests first erupted in anger at the SARS police unit that is accused of torture and murder. 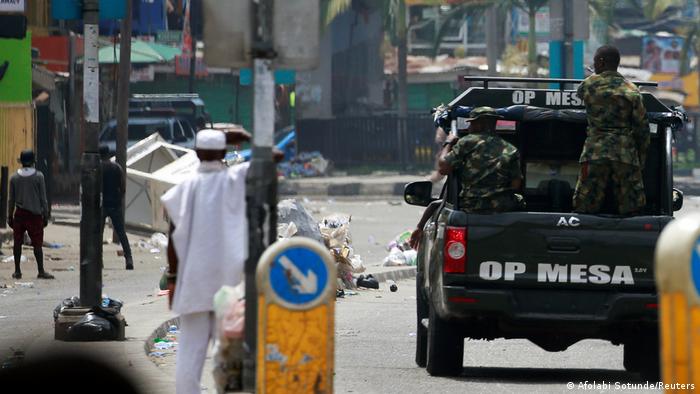 Fifty-one civilians have been killed since the start of police brutality protests in Nigeria, President Muhammadu Buhari admitted on Friday, confirming for the first time that lives were lost.

In a statement, Buhari insisted that security forces had used "extreme restraint" in their dealings with protesters and instead blamed "hooliganism" for the country's worst violence in years.

The president did not say whether security forces were responsible for the civilian deaths, but did note that 11 police officers and seven soldiers were "killed by rioters," taking the total number of fatalities to 69.

Read more: What you need to know about Nigeria's #EndSARS protests

Buhari's comments are likely to further inflame tensions that first erupted on October 7 when young people took to the streets demanding the dissolution of a notorious police unit known for brutality.

The Special Anti-Robbery Squad (SARS) was launched to fight crime, but it carried out torture and killings, according to Amnesty International.

The #EndSARS protests were sparked by a video of an officer allegedly killing a civilian that went viral.

The unit was dissolved days later.

Anger spread further after footage and images on social media showed security forces shooting at a crowd of around 1,000 protesters on Tuesday at Lekki toll gate, a key protest site in Lagos, Nigeria's largest city.

Amnesty reported that soldiers shot and killed at least 12 demonstrators as a large crowd sang the national anthem.

The shooting was followed by two days of unrest with numerous shops and buildings in the economic hub looted and vandalized.

The governor of Lagos, who imposed a round-the-clock curfew, published a list of 21 cases of police officers being prosecuted "for offenses related to the violation of human rights in Lagos".

"We are working to stabilize things across the state as we look to rebuild," the governor said.

US Secretary of State Mike Pompeo has called for an immediate investigation into the violence, which also triggered condemnation by the United Nations, the African Union, the European Union and others.