Nigerian police have freed more than 300 men and boys from an Islamic school in the northern city of Kaduna, where some of the students had been held in chains. Seven of the school's staff members were arrested.

Nigerian police said Friday they had found and freed more than 300 men and boys from a school in the northern city of Kaduna. Many of them reported being tortured and sexually abused, and about 100 were found chained in one of the school buildings.

"We found around 100 students including children as young as 9, in chains stuffed in a small room all in the name of reforming them and making them responsible persons," police spokesman Yakubu Sabo told the AFP news agency. Sabo said the victims had been kept in "debasing and inhuman conditions."

The Islamic school specialized in children who were suffering from drug-related issues and similar problems.

The parents were apparently not allowed inside the premises and instead were meeting students outside.

"All they thought was their children are being taught the Quran and good manners as they looked subdued," Sabo added.

Most of the children came from northern Nigeria, although authorities have identified two from Burkina Faso. 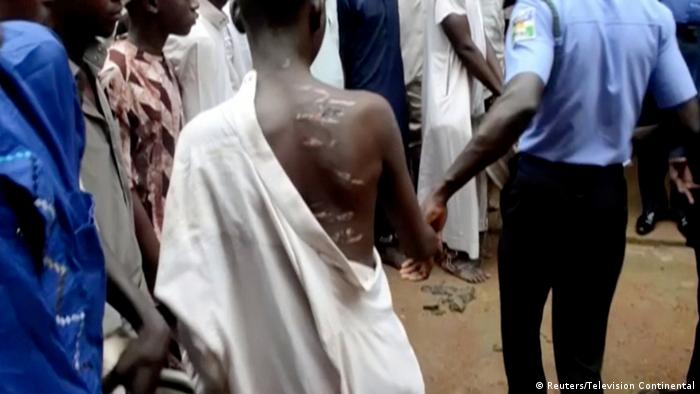 Officials found a 'torture chamber' where children were chained and beaten

Hung from the ceiling

Police had been alerted by complaints from local residents. Sabo said seven people had been arrested, including the school's proprietor and six teachers.

He also said officials had found a "torture chamber" where children had been chained, hung and beaten.

Nigerian media quoted one of the students, Bello Hamza, who said he had spent three months in the school with "chains on my legs."

"This is supposed to be an Islamic center, but trying to run away from here attracts severe punishment; they tie people and hang them to the ceiling for that," he said.

Nigeria has roughly even proportions of citizens following the Islamic and Christian faiths, with Islamic schools common across the mostly Muslim north.

Five years after the kidnapping of 276 girls from Chibok, many schools in northeastern Nigeria are still not safe. Student numbers have dropped and education is still suffering under the threat of Boko Haram. (13.04.2019)

Con artists have tricked hundreds of young Nigerians into traveling to Russia thinking they'd become professional footballers. Alas, when they arrive, their hopes are dashed and they find themselves with nowhere to go. (08.07.2018)

World in Progress: Nigeria's mobile teachers take it up with Boko Haram