Nicolas Maduro and Donald Trump skip the Summit of the Americas

The absences mark the first time that presidents from Venezuela and the US will not attend the OAS-sponsored summit. Nicolas Maduro's cancellation was a result of Peru's announcement that he was not welcome at the event. 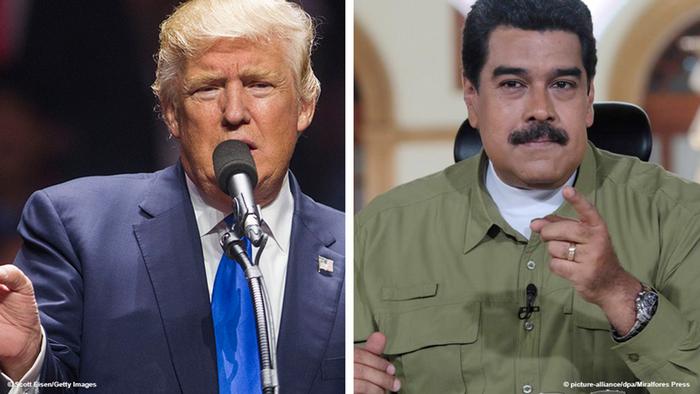 On Tuesday, Venezuelan President Nicolas Maduro confirmed that he would not attend the upcoming Summit of the Americas, to be held in Lima, Peru, calling the regional meeting "a waste of time." The announcement comes just a day after US President Donald Trump also canceled his attendance, opting to stay in Washington to deal with Syria policy. The absences are notable, as it would have been the first time that the presidents would have been in the same place.

The Summit of the Americas is a gathering of heads of state that takes place every three years and is organized by the Organization of American States (OAS).

Trump's absence will mark the first time that a US president has not attended the event. But not all heads of state in the western hemisphere are regular attendees. Cuba is not a part of the OAS and does not regularly attend. The last summit, which took place in 2015 in Panama City, was the notable exception, as it was the setting when presidents Barack Obama and Raul Castro met for the first time.

In February, Peru announced that is was disinviting Maduro from the event, speaking on behalf of the Lima Group, an assembly of states formed to tackle the crisis in Venezuela that also includes Argentina, Brazil, Canada, Chile, Colombia, Costa Rica, Guatemala, Honduras, Mexico, Panama and Paraguay.

The 12-nation working group has confronted Maduro's regime by demanding that it free political prisoners and criticizing the weakening of democracy in the South American nation.

Maduro had vowed to attend anyway, saying that neither "rain, nor thunder or lightning" would keep him from arriving in Lima "by land, air or sea." But two days before the event, the embattled president stated that since Peru "had removed all the security guarantees for the Venezuelan delegation," he would stay home.

He denounced the lack of security assurance for his attendance as "illegal" and "unfriendly" and said that he would rather spend those days "commemorating" the failed coup of 2002 against the late Venezuelan President Hugo Chavez.

To this, Peruvian President Martin Vizcarra reiterated his country's decision to reporters shortly before Maduro's cancellation, saying that the Venezuelan president "can come to Peru whenever he wants and how he wants, but he cannot come to the Summit of the Americas."

Maduro also took a jab at the decision by Donald Trump to not attend the summit, saying that the US president's absence demonstrated his "disdain" for the region.

Trump's attendance was to have been his first official visit to Latin America and it was also to have included a bilateral visit to Colombia. Instead, Vice President Mike Pence will lead the US delegation on the trip.

Peruvian President Vizcarra said he was disappointed by Trump's cancellation but added that Pence's substitution was a sign the US took the regional meeting seriously.

The US vice president will be in the spotlight as he takes part in a summit agenda that includes corruption, trade, transnational crime and the social, economic and political crisis in Venezuela.

Pence's deputy chief of staff said the vice president "looks forward to promoting policy that will lead to an even stronger US economy and working with our close allies in Latin America to collectively hold undemocratic actors in the region accountable for their actions."

The summit takes place at a time of high tensions between the US and its neighbors, in particular Mexico and Venezuela. The regional survey Latinobarometro said Latin Americans last year viewed Trump more unfavorably than they did George W. Bush or Cuba's Fidel Castro in the year of his death.

The US president averaged 2.7 out of 10 when Latin Americans were asked to rank him. By contrast, his predecessor Barack Obama received 7 out of 10 at the same point in his presidency.

Venezuela to knock three zeros off currency amid hyperinflation

Venezuela plans to remove three zeros off its battered currency. The largest bill in circulation, the 100,000 note, can hardly buy a cup of coffee. (23.03.2018)