Nicholas Dlamini: From a South African township to the Tour de France and beyond | Sports | German football and major international sports news | DW | 05.07.2021

Nicholas Dlamini: From a South African township to the Tour de France and beyond

Dlamini was the only Black professional cyclist at the Tour de France and the first Black South African ever to race there. Despite his elimination from the tour, his unique story has captivated the cycling world. 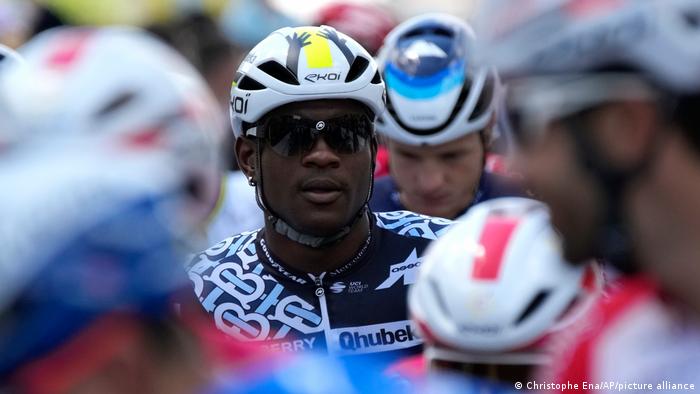 Both joy and sorrow were once again on hand during the ninth stage of the Tour de France. Nicholas Dlamini gave everything he could on the stretch from Clusus to Tignes in the French Alps, but after a crash, chances were slim for the South African from Team Qhubeka NextHash.

He was already far behind the time he needed to achieve to remain in the Tour de France before the final climb. But Dlamini refused to dismount and rode up the last hill and arrived at the stage finish 62 minutes behind the time limit and an hour and 37 minutes after the stage winner.

Even though the spectators celebrated him for his ambition, Dlamini had to say goodbye to the Tour de France.

Nicholas "Nic" Dlamini had been a sought-after man. Hardly a day went by when he didn't have to pass through the mixed zone before the start of a stage and tell journalists his life story — and what a story it is.

From a township in South Africa, he had made it to the biggest cycling race in the world. Now, the Tokyo Olympics beckon. 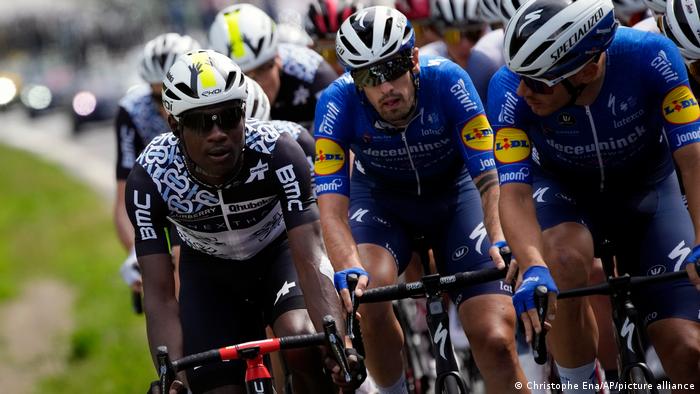 Dlamini's rise to fame was the result of a unique narrative. The 25-year-old is the first Black South African to participate in a Tour de France. He grew up in a township outside of Cape Town.

"Maybe one in 15 boys had a bike there. We used to line up then to be able to ride a bike," he recalls of the early days in an interview with DW. "One guy takes it for a minute, then brings it back and the next guy gets on," he says, describing his access to riding in Capricorn Park, one of the oldest informal settlements in the region.

This year in France, he had not one, but two, of his own bikes at his disposal. "Yes, this is a special development!" he said, marveling at his own story. "To be honest, I've had a lot of support, from a lot of people. I can't thank them enough. It started at club level, then to the Continental team in Lucca, from there to the World Tour team and now at Tour de France."

Gun fights instead of video games

Dlamini's destiny wasn't written in the stars. What he experienced in the Capricorn slum was, at times, brutal. "There you were only 'someone' if you carried a gun," he says, recalling a childhood that witnessed shootings and fights with knives.

He describes his mother, Gloria Nomfundo Zulani, as a hardworking woman who took care of him and his siblings alone. She worked as a domestic helper and often had to leave the house as early as 5 a.m. to get to her first job on time.

"She'd have to walk to the [bus stop], and it was very worrying, with the township being so dangerous. So sometimes I'd walk with her to make sure she got on to the [bus]," he wrote in a piece for the British online magazine velouk.net last year. 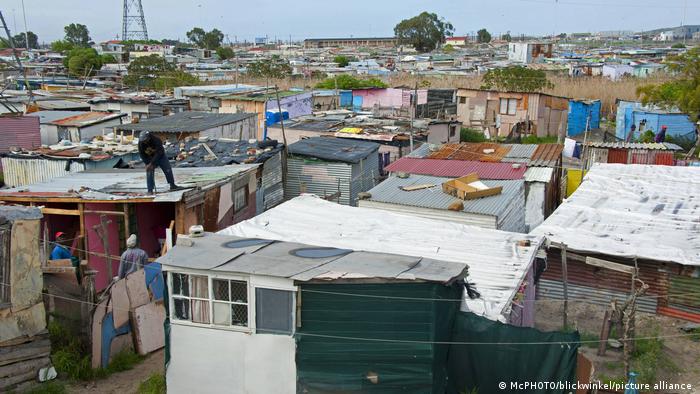 A view over one of the townships near Cape Town, South Africa

In 2019, Dlamini became an involuntary celebrity. During a training ride in a park near Cape Town, he was first stopped by a park ranger and then attacked so brutally that his arm broke. "I don't even know if I was shocked at the time. I grew up in the township. I've seen worse things there," he now tells DW thoughtfully.

But Dlamini was still surprised. The route through the park was part of his regular training routine. He was often there with other cyclists — caucasian mostly —  and was never stopped.

Athletically, the assault set Dlamini back. "I was still lucky that the season was so short last year because of COVID-19, which meant I could recover better," he tells DW.

He has also experienced support from around the world because of it. That strengthens him. He feels appreciated and respected in the peloton and is yet to experience racist hostility during the races, he says. "It also always depends on who you are and how you relate to the other people in the peloton."

Racism in the peloton

Other riders have had different experiences. Kevin Reza, a French sprinter, was the only Black Tour de France rider last year. Reza complained about racist slurs in the peloton. He also criticized professional cycling's lack of support for the Black Lives Matter movement.

Unlike in other sports, cyclists have rarely produced gestures of solidarity. In February, last year's Giro d'Italia winner, Tao Geoghegan Hart, posted a photo of himself on social media taking a knee, a common gesture associated with athletes and the BLM movement. His actions produced no imitators in the cycling world. 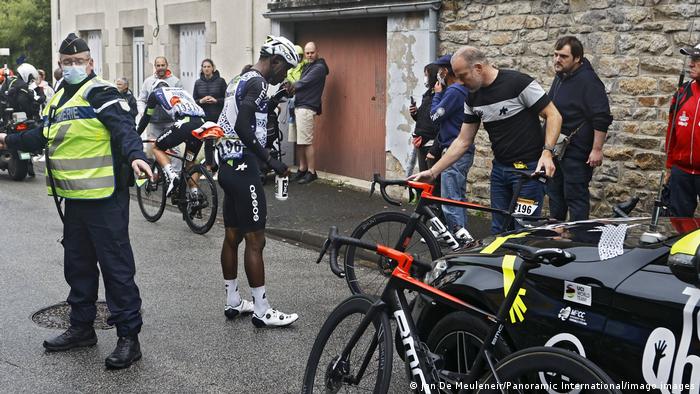 "Of course, we need to do more. We have to look more closely and we must not leave racism any place in cycling," Dlamini says, adding that it didn't matter whether it was at the Tour de France or any other cycling race.

He actually had a lot planned for the Tour of France. He wanted to make it into the breakaway groups, especially in the mountains because he is a tough climber. He also took the mountains jersey at the Tour Down Under in Australia. But his crash on the ninth Tour stage caused him to miss the time limit and put an abrupt end to his goals in France.

Cycling to discover the world

Dlamini started cycling because a bike afforded him a chance to expand his horizons. "In my youth, I was still a runner, a track and field athlete. A friend told me one day what he saw when he was on his bike. That's when I was fascinated."

"I then realized that I could simply discover more that way than with running. At that time, when I was 14 years old, my training routes were 5 to 10 kilometers long. But with the bike I could go a hundred kilometers and see a lot of Cape Town, many places I would never have known without cycling. The bike gives you a lot of freedom of movement," he reminisces. Nicholas Dlamini at the Tour de Suisse earlier this year

For him, Team Qhubeka NextHash has come full circle. That's because the racing team promotes a foundation that distributes bicycles to children so they can also experience what happened to Dlamini. "I've been fortunate to see a lot of these handovers of bikes. For the kids, it's a life-changing experience.

Some of them have never even touched a bike before, let alone owned one. Getting on a bike and riding it is really very special for them. You can see it in their faces, in their laughter," says Dlamini.

Under the face mask that you have to wear at the Tour because of the COVID-19 pandemic, a happy smile appears. Few other professionals on the Tour can appreciate the importance of a bike to a man who once stood in line as a child to ride a friend's for a minute.

After his involuntary farewell from the Tour, it is now important for Dlamini to recover from his injuries as he is part of South Africa's squad for the Olympic road race in Tokyo.

This article was adapted by James Thorogood

Tour de France: Slovenian duo Pogacar and Roglic in a league of their own

Tadej Pogacar and Primoz Roglic go into the Tour de France as the pair to beat. There are some talented riders capable of making an impact, but the two Slovenians are a long way ahead of the rest of the field.

A cycling spectator who caused a mass pileup has told investigators she feels ashamed of her "stupidity." She is worried about the huge public interest in her case as local authorities press charges.