NGOs battle to save their .org online 'homes'

Nonprofits and humanitarian groups have called the .org internet domain their home in the online world for decades. But now — to their dismay — part of their web addresses are being sold to a private equity firm. 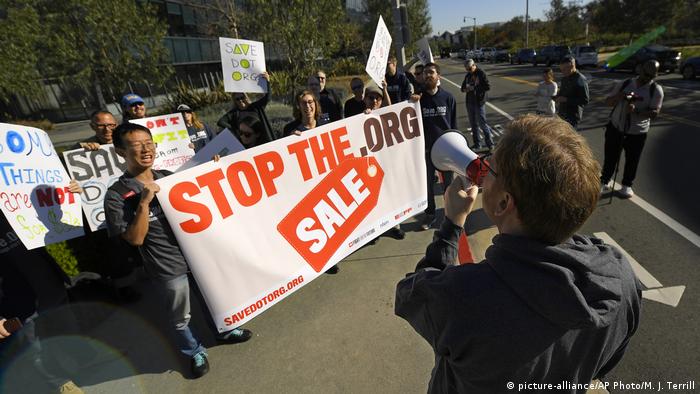 Real estate deals seldom attract such fierce opposition. But this one is no ordinary piece of property; the .org domain is one of the last bastions on the internet to have largely ducked the lure of big bucks and remain nonprofit.

Now hundreds of humanitarian organizations have united to oppose the $1.1 billion (€1 billion) sale of the .org registry to a private equity firm, Ethos Capital, arguing that the takeover would hurt millions of NGOs who rely on it to maintain an affordable and stable online presence.

In an open letter, heads of nearly a dozen prominent NGOs, including Greenpeace and Human Rights Watch, have called on the Internet Corporation for Assigned Names and Numbers (ICANN), the internet's governing authority, to block the sale.

For almost 20 years, nonprofits have purchased .org domains through the Internet Society-owned Public Interest Registry (PIR). In November, the society — a nonprofit working to ensure the internet remains transparent and open — announced that it was selling PIR to Ethos Capital in a deal that would "provide the Internet Society with an endowment of sustainable funding." The takeover alarmed the nonprofits, who worried that it could lead to higher renewal or registration fees and censorship.

"Our greatest concern is that the .org will become driven foremost by profit making which easily could put it beyond the means of many starving NGOs," said Kenneth Roth, executive director of Human Rights Watch. "It [the sale] also makes it much easier to politicize .org because a private equity firm inevitably is going to have substantial economic interests in countries like China or Russia who will have no qualms about threatening those interests if censorship is not imposed on .org groups."

Ethos Capital, which counts a former ICANN executive among its ranks, has sought to allay these concerns.

"To be clear, preserving the interests of those using .org names is our highest priority," Ethos Capital and PIR told DW in a statement. "We will not raise prices outside of PIR's historical practices, nor reduce services, nor impose 'arbitrary censorship,' nor otherwise abuse the trust that comes with responsible operation of the registry."

Ethos Capital said it will ensure that .org domains, which would continue to be overseen by PIR, remain affordable by limiting any potential increase in the price of a .org website registration to no more than 10% per year on average.

"At less than $10 a year today, this would equate to about $1, and .org will thus continue to be one of the most affordable domains in the world.  We will enshrine these pricing commitments in documents governing the operation of .org," Ethos Capital and PIR said.

The NGOs are not convinced and question how the self-imposed price cap would be enforced. Adding to their skepticism is the fact that a 10% cap on .org prices was eliminated less than a year before the PIR-Ethos deal was announced.

"Should the sale proceed it will actually put the Public Interest Registry out into the wild," Brett Solomon, executive director of digital rights group Access Now, told DW. "We might be safe for a year or two but what happens when Ethos Capital decides that it wants to sell to Pathos Capital, to the next buyer or to a government entity for instance. How do you ensure that the controls that are currently in place move with the purchaser?"

Solomon said he was open to the .org domain been taken over by a nonprofit cooperative backed by prominent internet nonprofits, including Wikipedia parent Wikimedia Foundation and the Electronic Frontier Foundation, who have put the cooperative as an alternative owner.

"What they want is for ICANN to gift the Public Interest Registry to them to manage in the public interest as opposed to a for-profit," Solomon said.

ICANN, which has the power to block the deal, has already sought two deadline extensions to review the sale. It now expects to announce its decision before April 20, 2020.

The second extension was sought after the Attorney General of California asked for information on the deal to "analyze the impact to the nonprofit community, including to ICANN."

The countries which are best regarding internet freedom and e-citizenship

Internet access in Colombia has improved dramatically in recent years. Access in the countryside, however, remains a challenge. Ariel Barbosa and his NGO want to change this – but not at any cost. (18.02.2019)

Web inventor Tim Berners-Lee unveils plan to save the internet

Thirty years after he invented the World Wide Web, Tim Berners-Lee has released what he calls a "roadmap to build a better web." His plan aims to halt abuse of the internet by governments, companies and individuals. (25.11.2019)

Russia moves toward creation of an independent internet

Experts say Russia is planning the next step in making the country independent from the West, at least in cyberspace: Moscow wants to install its own root servers. But why, and does it make any sense? (17.01.2018)