A woman who has accused Brazilian soccer star Neymar of raping her in a Paris hotel has testified to Sao Paulo police. His sponsors are backing out, but Neymar still enjoys massive support in his home country. 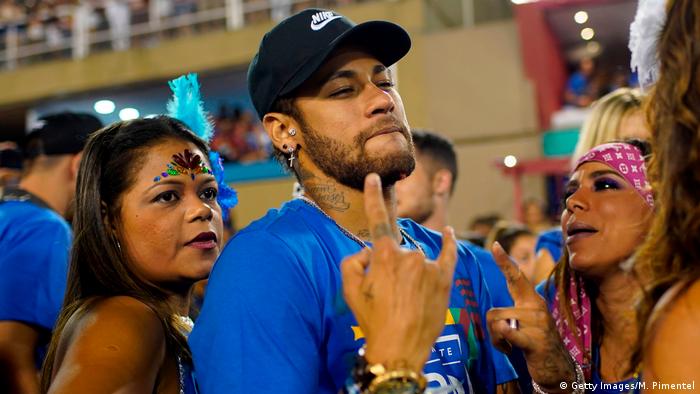 A 26-year-old model has accused the star striker for Paris Saint-Germain of raping her in a Paris hotel in May.

She spent about six hours giving a statement to Sao Paulo police on Friday, braving the assembled media scrum. The case has gripped the football-loving nation.

Earlier in the week, Neymar also spoke to police after intimate WhatsApp messages and photos of his alleged victim were leaked online. He blamed an assistant and a technician for the leak.

His alleged victim told Brazilian media she had suffered "aggression together with rape" at the hands of the player. She alleged he was angered after she refused to have unprotected sex. He allegedly continued anyway and hit her repeatedly.

NR Sports, rights holders of Neymar's name and image, said no sponsorship contracts had been canceled, though it detailed which campaigns had been suspended.

"All the partners, for obvious reasons, are alert and aware of the unfolding events," the statement said.

Nike said earlier in the week that it was "very concerned" about the rape accusation. Mastercard told Reuters news agency it had planned an advertising campaign, but did not confirm reports it had decided to suspend Neymar's role in the project.

Neymar, one of football's biggest names, has enjoyed a surge of support among Brazilians in the wake of the accusations. Polls show more than 60% of Brazilians believe he is blameless, and even far-right President Jair Bolsonaro has publicly declared his innocence.

Las Vegas police have asked Juventus star Cristiano Ronaldo to submit a DNA sample as part of their investigation into rape allegations made against him. The request relates to an alleged rape nearly a decade ago. (11.01.2019)

The 51-year-old defended his actions, saying he "pecked her" while trying to calm her. "Gazza," considered one of the best footballers of his generation, has struggled to overcome alcoholism since departing the sport. (19.11.2018)