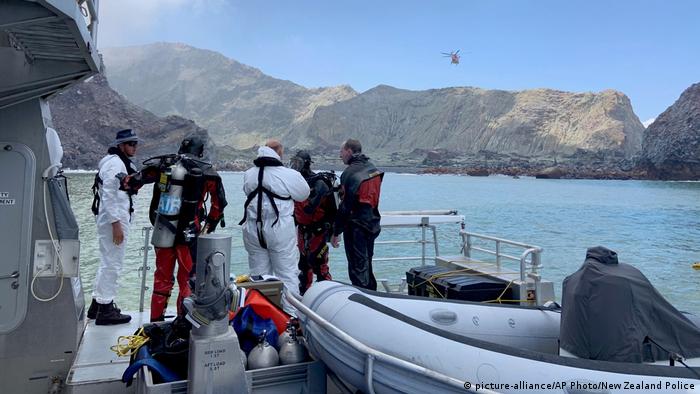 The death toll from New Zealand's volcanic eruption rose to 16 on Sunday, as eight specially equipped police officers landed briefly on White Island but failed to locate the last two people missing, thought to be a tour guide and a shuttle boat captain.

Among the rising toll were two injured people who died on Saturday, one in a hospital in New Zealand and one who had been transferred to Australia. Many of the 47 people who had been on the island volcano when it exploded last Monday were Australian citizens or residents. The island is a popular day-trip destination for tourists.

Police and military divers continued to scour the murky island waters on information that a floating body had been sighted several days ago. Police also started releasing the names of formally identified victims.

On Friday, six bodies were retrieved, some from ash-turned-dense mud in the island's crater, by special forces soldiers who wore special backpacks for breathing and keeping them cool.

They had labored "past the limits of endurance" to extract the bodies to a navy ship offshore, said Colonel Rian McKinstry, according to local media.

Ash and other fallout turned the sea near the island toxic. Divers must be washed clean after every operation.

New Zealand's Ministry of Health said 14 injured were still being cared for at burns units at four hospitals around the Pacific nation, while 13 others had been transferred to Australia to be treated in Sydney and Melbourne.

Prime Minister Jacinda Ardern urged New Zealanders to observe a minute's silence on Monday, at 2:11 p.m. local time (0111 UTC) exactly a week after the eruption on the island also known as Whakaari in the Maori language.

"Together we can express our sorrow for those who have died and been hurt and our support for the grieving families and friends," said Ardern. 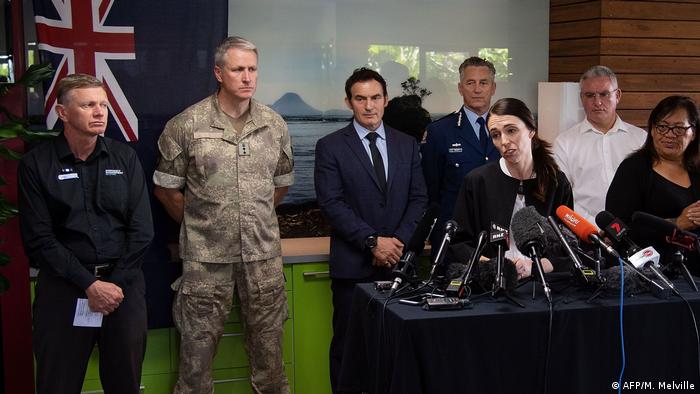 International media, meanwhile, started focusing on New Zealand's government-operated accident compensation system as questions mounted about who exactly was responsible for the safety of tourists.

The public Accident Compensation Corporation (ACC) said in a December 10 advisory on the Whakaari/White Island eruption, "Everyone in New Zealand is covered by the scheme, including international visitors."

Funds were available for medical care for those injured or funeral costs for those who had "lost a loved one" in the eruption tragedy, said ACC. Founded in 1974, it bills itself as an accident insurance scheme that is unique in the world.

Britain's The Guardian newspaper said it was "already clear that those hurt in the eruption will be prevented from bringing civil lawsuits in New Zealand against the tour companies who took them to the island, or anyone else."

The ACC system, from which the "injured cannot opt out of, bars them from suing for negligence," reported The Guardian.

Australia's ABC public broadcaster said risk deterrence was in the hands of WorkSafe New Zealand, a public entity, which had already begun a probe into the disaster.

The disaster has raised questions about why tourists were allowed to visit the volcanic island where experts had recently upped the threat levels.