New Zealand geologists say there is at least a 40% chance of White Island volcano erupting in the next 24 hours. The bodies of nine people are still missing on the volcano's rim. 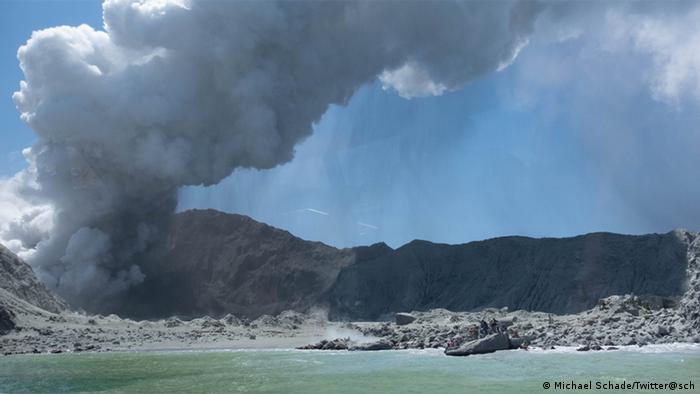 The threat of another volcanic eruption prevented recovery efforts Wednesday of at least nine people missing and presumed dead after an island volcano erupted off the coast of New Zealand while dozens of people were touring the rim.

Geologists monitoring the White Island volcano said volcanic tremors had increased Wednesday morning, along with increased venting of steam and mud. According to the GeoNet seismic monitoring agency, there is a 40-60% chance of an eruption similar to Monday's within the next 24 hours.

"We interpret these signals as evidence of continued high gas pressures within the volcano," the seismic monitoring service GeoNet said in an alert bulletin.

"Eruptions in the next 24 hours are still likely to occur,'' the bulletin said, adding that volcanic tremors have continued to rise and are at the highest levels since the volcano last erupted in 2016.

On Wednesday, a plume of smoke can be seen coming from the island, which is called Whakaari in Maori.

What is now a recovery mission was hampered by the seismic activity on Wednesday. Police said they were standing by to go back to the island but it was currently too dangerous.

"We cannot put other people in jeopardy to go out there until we're absolutely certain that the island is actually safe," said a police commissioner in Whakatane, the town that is an access point for tourist trips to the island.

Currently 30 patients are being treated at six hospitals around New Zealand. Many of the victims sustained severe burns.